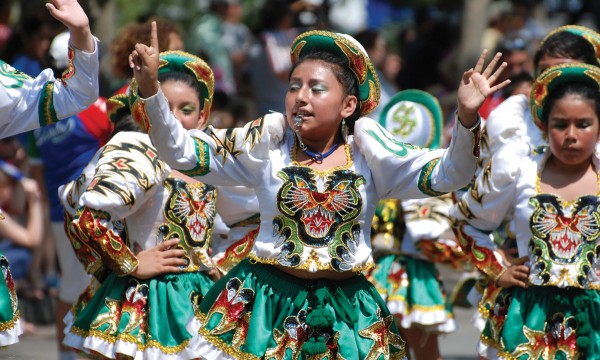 For nearly my whole life, I’ve lived in Boston, a city that captures the US’s image as a melting pot of religions, languages and cultures. Growing up, I didn't have to leave my hometown to encounter people from all over the world. I had neighbors, teachers and classmates from Brazil to Ethiopia to Uzbekistan to New Zealand. But since coming to Bolivia, it struck me that in 19 years I’ve never met a Bolivian in the US. Given the large population of Latin Americans in the country, I found this odd. Where are all the Bolivians?

It turns out the Bolivian immigrant population in the US is small, but existent.The actual number of Bolivians in the country is disputed. According to a recent census, around 20,000 Bolivians live in the Greater Washington area, making it one of the largest Bolivian expat communities in the US. However, local community leaders suggest that the population is actually much larger.

“Arlington is like a little Bolivia,” Patricia Zamora tells me, from her desk at the Instituto Exclusivo language school in La Paz.  “You can find salteñas, typical Bolivian restaurants, stores, and businesses. The McDonald employees even prefer to speak Spanish,” she says.

As a native Bolivian who raised her family just outside of Arlington, Patricia explains that Bolivian immigrants have made a strong effort to keep their culture alive in Virginia. They have established folklore groups, football leagues and a weekend school for Bolivian-American children. “They celebrate all Bolivian holidays,” Patricia tells me, “like Carnaval and Fiesta de Urkupiña.”

This “Little Bolivia” began in 1980s as a result of a suffering Bolivian economy. People uprooted their lives and moved to Arlington in search of a “better life.” Most of the early immigrants came from Cochabamba and established construction, carpeting, roofing, and restaurant businesses. “Cochabambinos are hard workers,”  Patricia tells me, “After a few went to Virginia, their family members followed, and the population grew.”

Like many other immigrant communities, Bolivians in the US tend to keep to themselves in order to preserve their culture and values. Though admirable, this impulse can also isolate an immigrant community. According to Patricia, many adult Bolivians in Arlington never manage to learn English, even after as many as 14 years of residence.

Perhaps this is why I’ve never met a Bolivian in Boston. But, as fate would have it, next year I’ll be attending university right outside of Arlington, Virginia. And now I know where to find my salteñas.