ELI’S AND THE COMANDANTE 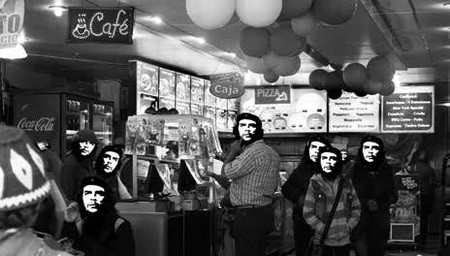 En route from La Paz to El Alto you are likely to drive past a roadside statue of Ernesto Che Guevara, the Argentine revolutionary whose iconic face has come to adorn anything from T-shirts to protest banners across the globe. The metal statue is overpowering, as are the myths and urban legends that surround his figure in this country.

In Bolivia, el Che exists as a paradox. He is lauded by everyday people and by President Evo Morales himself, yet it is here where he fell. He is an emblem of the Bolivian army even though it was precisely this army that killed him. Che is exalted as a leftist figure of Marxist thought although the Communist Party of Bolivia turned its back on him in the 1960s.

Despite these paradoxes, there is no doubt he lives on in the collective local imagination through numerous tales and stories. But none of the myths that precede him are quite as quirky and mundane as the one that ties him to a local pizza shop. Legend has it that, during his 'Motorcycle diary tour' of South America, Ernesto Che Guevara worked at a restaurant in La Paz named Eli’s Pizzeria.

When Eli’s Pizzeria began, more than 70 years ago, it operated out of a single shop next to the cinema on El Prado. Today, like el Che, the pizzeria in La Paz has become a popular icon. What began as a local pizzeria, has now become a growing Bolivian food chain with restaurants and street stalls across the country.

The chain does very little to advertise its supposed link with Guevara. When you walk into any of their pizza shops, you would hardly imagine such a place could have been a part of his revolutionary odyssey. Compared to other restaurants in La Paz, the original Eli’s Pizzeria is vaguely reminiscent of an American diner. The walls are a modest tribute to the restaurant’s staff and former owners with no reference to Guevara at all.

Despite having changed its name multiple times, Eli’s has kept several members of its staff for the majority of its history. One such member was Don Max who, in life, ardently maintained not only that Che Guevara did work at the pizzeria at one point, but also that he stayed with him in his house for a brief period of time. Regrettably, Don Max is no longer around to verify these claims, although his story is at the heart of this urban legend.

The lack of evidence confirming El Che’s supposed employment at Eli’s Pizzeria may be enough to dispel Don Max’s tale, but rumors endure to this day surrounding el Che and his connection to the restaurant.

Doña Margarita, another employee at Eli’s, has been waiting tables at the shop for more than 60 years. She recalls the claims made by Don Max, but denies that Che ever worked at the restaurant. According to Doña Margarita, Don Max greatly embellished his recollections.

What Margarita remembers, though, is that el Che did indeed frequent the pizzeria during his brief time in La Paz, apparently accompanied by several exiled Argentinian Peronists. 'He always had a coffee and apple pie', Margarita recalls. Perhaps this was his choice of food over which to discuss the budding future of the revolution he was spearheading. However, this may well be the stuff of local legend.

The restaurant staff apparently did not realise the significance of Guevara’s presence until years later, when a manhunt began throughout the whole of Bolivia in search of the revolutionary leader.

Such is the trail left by a controversial figure who would meet his end in La Higuera. The truth of his passage through La Paz may never be known, even if we take Doña Margarita’s word for all of this, but this hardly matters anymore. After all, legends live on in the minds of the those who believe in them.