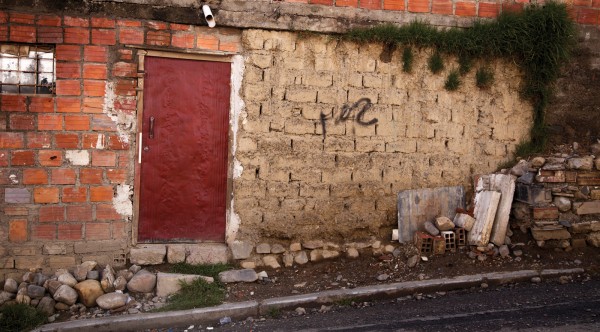 The windows are curtained, boarded-up or papered over. A black iron shutter covers the only door at the entrance. In front of the brown brick building a market sleeps its way to closing time. The average paceño passing by would barely glance at the seemingly run-of-the-mill house. However, behind the shutters, curtains and boards, in the semi-darkness and filth, purportedly sit unknown numbers of drunkards fulfilling the most macabre of urban legends: El Cementerio de Elefantes.

Made famous by multiple films and books, these cemeteries are places etched in La Paz lore. Across the city, unexceptional buildings house these clandestine bars, often with only one purpose: to offer Guabira (96% proof alcohol) mixed with yupi or water to alcoholics until they expire. Since the customers are often afflicted with constant tremors due to long term drinking, they are not even offered bottles or cups. Instead, as detailed in a short story entitled ‘Los Cementerios de Elefantes’ by Victor Hugo Viscarra, they are given a bucket filled with alcohol and a dipper. They then sit in their room, often unlit, sometimes communal, and wait for the the process to kill them.

Some cemeteries have fronts as normal bars, with an upstairs room for clients who have no wish to leave. Others exist with this as their sole purpose. It can take days or weeks for the end to come. Housed in a room with a straw mattress, given to the clients to try and sleep away the pain, and have a smaller bucket to relieve themselves. When the end does mercifully come, it is often after an agonising experience of destroying an already almost broken liver, with the drunk delirious from dehydration.

Such sites have inspired artists for decades. Depictions of the cemeteries in art are different in style but universal in message. Tonchy Antezana’s film ‘El Cementerio de Elefantes’ is a grim reflection on a drunkard’s life, whilst Viscarra’s cuento on the same theme takes a dispassionate view of the subject but is still no less morbid. Viscarra fails to condemn the actions of the owners, preferring to offer a description of the grisly events within. Manuel Vargas, Viscarra’s longtime friend and editor, says there was some invention in his story, but ‘he wrote from experience’, having spent a lot of time in the bars and hostelries in the areas known for cementerios.

In most areas of present day La Paz, knowledge of these establishments is patchy. Near one of the most recently closed cemeteries, known as Putunku, near La Paz’s main bus terminal on Calle Montes, a local zapatero, Fernando, says he has no knowledge of these things. Pressed, he finally says, ‘Go ask the young people about it,’ keen for me to leave him alone. A local police officer, Humberto Lopez, also seems nonplussed. ‘I don’t know the real stories,’ he told me.

In a different area more renowned for the cemeteries, on and around Avenida Buenos Aires, a sucrense taxi driver, Felipe Quispe, told me a cemetery story. ‘My friend went and killed himself in one a couple of months ago,’ he said, keeping his eyes on the road. Going along the Avenida, near Mercado Felix Hinojosa, he points to a pharmacy. ‘There’s one of them. Three floors,’ he points out. Again, a single black shutter denotes the entrance. On the top floor, children’s laundry is hanging. Often, according to Felipe, cementerios are embedded inside average apartment blocks.

He shows me another building, a cemetery apparently named ‘El Timbre’ or ‘The Doorbell’, that sits up a hill with a beautiful vista over La Paz. According to the Intendencia Municipal – the local authority that oversees all major issues in the city– it has been raided and shut down, but Felipe is certain that it is still open. A third cemetery lies just off Plaza Garita de Lima and is apparently called ‘Las Ventanas’ due to the number of windows on its front. There is a certain irony to its location, as it lies opposite a hospital.

When pushed further on his friend, Felipe waxes philosophical: ‘It’s better that he died. Now his wife doesn’t worry about him.’ There is a tone of derision in his voice. ‘He lost everything: his wife, his children – his eldest is only 14 – and for what?’ This sentiment is not unique. Even Viscarra, who socialised in alcoholics’ bars, probably rubbing shoulders with those on the verge of committing themselves to such an establishment, seems to be even faintly critical. In his cuento ‘Los Cementerios de Elefantes’, the author describes the drunks as ‘having the shakes of recalcitrant masturbators’.

The police response to these places is limited. ‘For the police, these types of establishments provide something like assistance,’ writes Viscarra. According to him, this is one explanation for their continued existence. Another, provided by the Intendencia, is that there simply are not enough resources to prevent the emergence of cementerios. ‘We have a task force,’ says Paola Valdenassi Flores, Manager of the Intendencia’s office at Avenida Camacho. ‘But this is not the only issue we deal with.’ Raids on these establishments are rare. She says that on average the Intendencia tips off the police to shut down a cemetery three to four times a year. However, when the police go in, they often get it right. As recently as early March the police raided a site near Calle Linares, finding a cementerio.

"Depictions of the cemeteries in art are different in style but universal in message."

The effects of such raids on proprietors and clients are unclear. Cynically, Felipe says the owners pay off the police and go on their way to continue their grim business, often at one of their other properties. Paola seems hazy on this subject, saying it is not her purview to oversee the enforcement of justice against the owners. ‘The police throw the drunks out on the street,’ says Felipe, with disgust. ‘We chuck them out,’ Paola confirms, ‘It’s a personal choice to recover.’ The onus is on the sufferer to cure himself, with little State support for these suicidal individuals.

Urban legends are often proven to be untrue. They are dismissed as nothing more than sensationalism and speculation. For a while, Los Cementerios de Elefantes were viewed in such a light. Indeed, Viscarra’s story was ridiculed as a piece of pure fiction. Travelling around La Paz, you can see why. These places seem to be nothing more than closed storefronts, run down houses, background details in the patchwork architecture of La Paz. However, this only adds to their mystique. Behind every steel shutter, every curtained-off window, there could be more than meets the eye. Elephant cemeteries may inspire artists, but they are more than just fiction. In reality, they are anything but art.