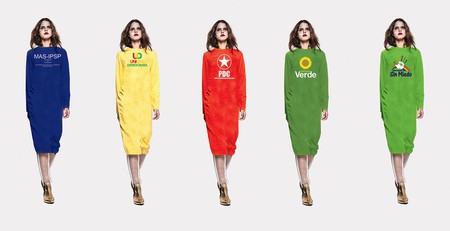 The red carpet is out, the spotlights are set and the playlist, featuring the teleférico anthem and the commissioned Quipus rap, is ready for this October’s long-awaited election catwalk. Drummed into us from an early age is the concept ‘don’t judge a book by its cover’, but we’re going to do exactly that by evaluating this year’s Bolivian presidential candidates on their appearances.

Morales leapt to fame in 2006 as a political fashion icon, or so I’m told—I would not consider myself a sartorial expert. He was a hit as he sported his trademark striped jumper, an indigenous Bolivian ‘everyman’ in contrast to the suited and booted political class. He also became president. Fast-forward eight years and it seems that Morales has become accustomed to power and is cultivating a different image as the incumbent president seeking (a controversial) re-election. That’s no flaw as times and circumstances change, but he hardly appears or attempts to be the guy next door anymore. He is now undoubtedly a statesman, and this is the image he is going for. He moves around in a private jet and a bulletproof car and wears fine suits, although the jackets often have a stylish Bolivian twist. He just doesn’t seem quite as down to earth as the Morales of 2006. But maybe the fashion change has come for reasons unknown. Maybe he’s just lost his special jumper and can’t bear to replace it—who knows?

Is he trying to pull off the ‘everyman’ look? Often appearing as if about to go on a run in a good-old hoody, Doria Medina is taking over the legacy of Morales’s sweater phase that showed he too was one of the people. A prominent public figure both within industry and the political sphere, where he boldly alludes to the ‘Corruption of the Government’ on his webpage, this fast-food entrepreneur is the head of Burger King and Subway franchises in Bolivia. He’s also the chairman of the board of the global cement company SOBOCE.

Granado sports the non-image image. His party is much loved due to Granado’s former post as mayor of La Paz, but he has no real cultivated presence—surprising for someone who has the bold nickname ‘Juan Sin Miedo’ (Juan who has no fear). At the very best, he has tried to adopt a sleeveless sweater and collared shirt combo as a dress code. No more.

Representing the Christian Democrat Party, Quiroga has in fact already served as president of Bolivia, from 2001 to 2002. In terms of trying to describe his appearance, perhaps it’s best to let Quiroga himself do the talking. He presents a very Western image: he is of Spanish descent, appearing in well-cut and tailored suits presenting a dignified image. He studied in the United States and worked for IBM in Texas, describing himself as a ‘corporate yuppie’. Upon his return to Bolivia, Quiroga continued to work in the private sector as a specialist in a large mining company before entering politics. It seems his self-description is rather honest. Maybe it’s just me, but he rather reminds me of Mitt Romney. You can rely on Quiroga to always be dressed in a good suit, but when he’s feeling particularly wild a pair of smart trousers and a shirt—without a tie.

Vargas is an indigenous leader who rose to national prominence as a leader of the TIPNIS march, which saw hundreds of indigenous people march for weeks in protest of a government-backed highway through their land. His trademark is his brown, leather sombrero, which goes wherever he does. Vargas doesn’t dress up and he doesn’t dress down. His jeans and cotton shirts are ready for whatever the day demands.