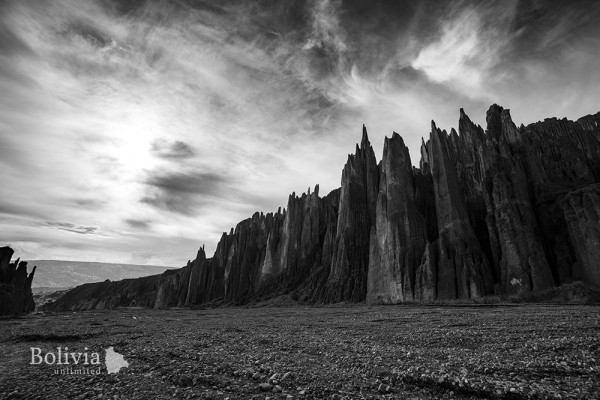 Just east of La Paz’s Zona Sur, the spires of el Valle de las Ánimas (‘Valley of the Souls’) hang over a carved-up glacial valley, resonating with a mystical quality. A mere one-hour bus journey from the city’s centre, this beautiful park is often overlooked by visitors to this sprawling city. The natural attraction goes beyond the aesthetics; it has inspired spirituality for the indigenous population for centuries, who know it as the home of babies who died before baptism – this is limbo on earth.

‘Limbus infantium’ is a concept not readily accepted by the Catholic Church; however, with the indigenous assimilation with Catholic concepts, this interpretation has become commonplace in a very Bolivian Christianity. Looking up at the towering spires, it is hard not to see why the image of spirits in limbo struggling to reach the heavens has been projected upon these rocks. These dizzying spires inspired myths and tales of the yearning of those condemned to a monotonous eternity in the valley. Desperate to reach their exalted loved ones, they try to ascend these rocky ladders – or so the myth goes. Irrespective of spirituality, one can agree that it’s a poignant tale. But those not convinced would happily settle with the geological explanation, which is simple enough: el Valle de las Ánimas was formed due to erosion left from glaciers, an explanation that is no doubt correct but underwhelmingly unsentimental.

But el Valle de las Ánimas doesn’t only attract visitors purely for its aesthetics and spiritual depth. It’s also known for its spectacular view of the iconic Illimani, the tallest mountain in Bolivia’s Cordillera Real. There’s nothing that stands in the way of the perfect view of Illimani, which, depending on the weather, can sometimes be seen from La Paz.

El Valle de las Ánimas so far only houses the lingering souls of unbaptised children and various species of birds; however, there have been recent government plans to introduce a variety of fauna – including condors, Andean foxes, vizcachas, kestrels, giant hummingbirds, hawks and other birds of prey – in an effort to turn the valley into a natural reserve. And then those poor children’s souls will finally have some company in the vast eternity of limbo.