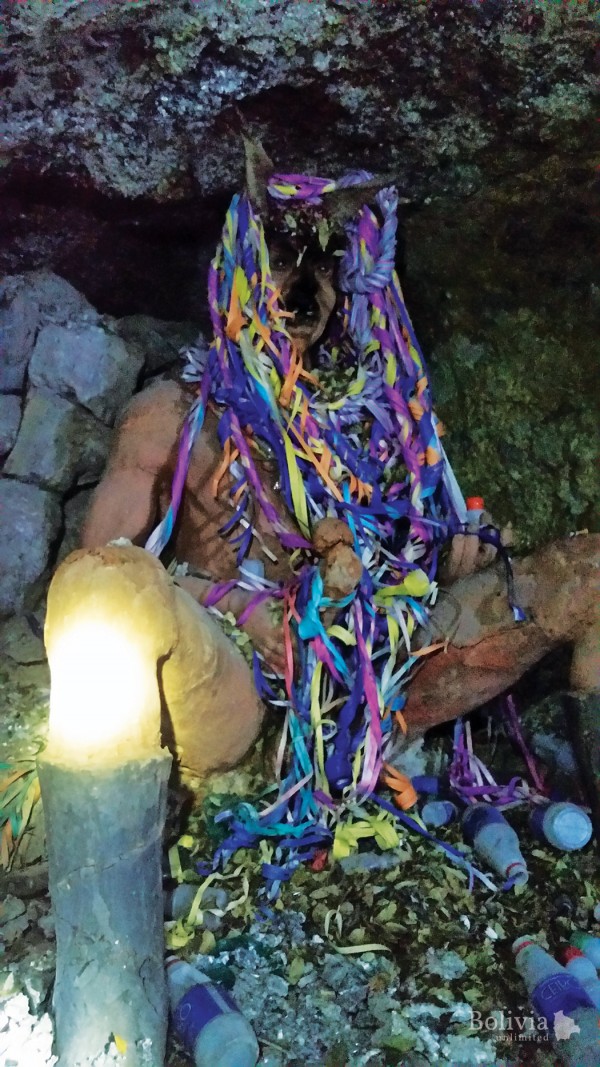 The generator of profits and curses

At over 4,000 metres above sea level, Mario sits opposite El Tío, deep in thought. With the little strength he can muster, he lifts one last handful of coca leaves to his numb mouth. He is cold to the bone, his skin shrinks, and he longs for answers, as images of his four children and partner race through his mind. He is overwhelmed by helplessness and blinded by woes, and he pleads for supernatural powers to intervene and perform a miracle. Before exiting the mine, he chews on one last mouthful of coca and leaves behind a lit cigarette for El Tío. Making his way out, he feels a faint touch on his back. He turns to see two beefy red hands offering him fresh green leaves, and he accepts without hesitation. In El Tío, he sees a benefactor. They start talking; they share an affinity with each other. El Tío tells Mario that he has watched him work tirelessly for years but for little reward, and so he offers to help him.

This is the story of Mario Llanque – a 36-year-old miner who shared his tale with me as we chatted on the hillside of Cerro Rico in Potosi. He is unwavering in his belief that El Tío is real, and that when the miners need him, he is there to help them.

El Tío de la mina is undoubtedly one of the most photographed, written about and decorated figures within the collective imagination of western Bolivia. According to Catholic Christian religion, Lucifer was once God’s favourite angel, but upon revealing his true self, he was banished to the depths of hell. Then there is the legend of the indigenous God, Wari, who is said to have entered the underworld to watch over the spiritual realm of ukhu pacha (‘underground’ in Quechua). Indigenous groups believe Wari to be a guardian of our world, drawing syncretic parallels with the reign of Hades over the kingdom of the underworld in Greek mythology.

According to writer Carlos Condarco, ‘It is believed the name ‘tío’ was introduced between 1676 and 1736. Using the Spanish word for ‘uncle’ to indicate kinship and closeness, the mitayos sought to establish a family bond with the deity dawned in their minds. Victor Montoya reflects that same idea in his book, Cuentos de la mina (Tales from the Mine) - a collection of 18 stories based on the exploits of El Tío – and his other book, Conversaciones con el Tío de Potosí.

Whatever the origins of El Tío may be, his presence and significance to the miners are tangible and real. He is the generator of profits and curses. Llanque understands that the precious metal in the mine does not belong to him and that he must ask permission to extract it. The miners believe that the devil owns their souls, and they enter into a pact with this ambivalent being of good and evil. Statues of El Tío can be found at every entrance to the mine, some intricate and others rustic. There he sits with an erect penis, horns, big eyes, a goatee, mouth wide open to smoke his cigarettes and arms outspread to receive offerings. Draped in paper streamers and covered in confetti, he sits with the miners and their visitors, awaiting gifts of coca and alcohol. ‘Only when the devil is generous do we receive a good lode of silver and walk out of here alive. You shouldn’t fear El Tío, because if you do he kills you and eats the miner’s soul’, says Miguel, a 14-year-old who featured in the 2010 documentary La mina del diablo (The devil’s mine).

The terrifying image of El Tío takes on many different forms and is one of the main protagonists during carnaval. Hundreds of dancers dress up as devils and demons and jump and dance in the streets alongside jucumaris (Andean bears), toads, lizards, angels and china supay (female devils). Vindicating their respect for El Tío, they attain a magical realism that is both paradoxical and everyday.