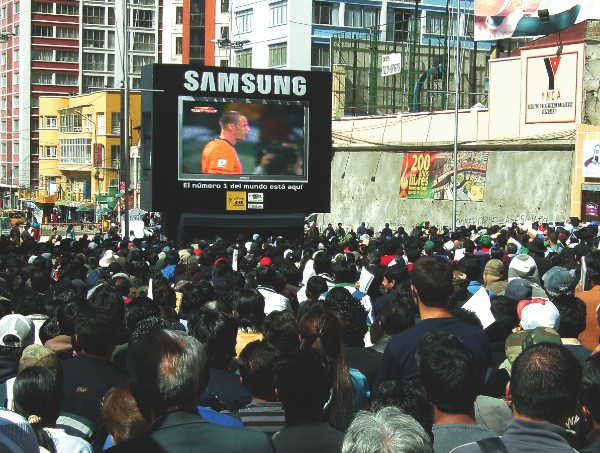 A Global Phenomenon. El Mundial. The World Cup. Le Coupe Du Monde. For one month every four years the world is overcome by football fever and Bolivia is no different, despite the fact that the last (and only) time the national team qualified for the World Cup was in 1994. A poor showing of 10th in the South American qualifiers meant transferring support to some of their continental neighbours – but only for the duration of the competition.

Unfortunately for many, the games were only showed on cable TV, a priviledge still only available to a small fraction of Bolivians. Nonetheless, opportunities to watch the action live weren’t lacking, particularly in public places, and people did almost anything to see the games. Across La Paz, four giant screens were erected by Samsung with every match witnessing tighly-packed crowds sitting and standing on every imaginable surface. Paceños also had the chance to watch the games in the small screens of buildings such as the Correo Central and certain banks, giving people the opportunity carry on with their everyday lives (albeit much more slowly).

Many people who were unable to abandon work just to watch the football were invariably reduced to listening to it on the radio, relying on the excitable voices of the Bolivian commentators. The cinema, with a better atmosphere, bigger screen and slightly more committed fans, was another popular viewing site, the only price for entry being at least half an hour in a queue to guarantee a seat. During one of the quarter finals the crowd was so engrossed in the match (supporting Paraguay) that when a small infant started crying, everyone, without turning their eyes away from the screen, hushed the child to such an extent that the parent hurried outside in embarrassment. Examples are abound of people taking matches too seriously, perhaps the most extreme of which was the fight that broke out between two German tourists and a Bolivian who took exception to their celebrations, ensuing in police intervention and participants being roundly booed for interrupting the match. In spite of the absence of Bolivia from the competition, most people found a surrogate team to back through most of the competition. While locals largely supported participating South American teams, a line was drawn at Argentina, the likely cause being the perceived mistreatment of Bolivian immigrants in this neighbouring country, as well as their infamous Porteño arrogance. Many Bolivians could be found cheering for whoever was playing against them. The extent of this animosity was felt during the quarter-final between Germany and Argentina, when German flags were handed out near to the giant screen by the UMSA, creating a mass of black, red and yellow. Celebrations became more and more exuberant as each German goal went in and the potential for an Argentinean comeback diminished. However, with the elimination of Uruguay in the semi finals (the last remaining South American contender), Bolivia was left to choose a new team to follow. Miguel, a builder who had taken one of his ten days of yearly leave, watched the match between Uruguay and Holland with his twelve year old son Christian. He nutshelled the general sentiment by proclaiming “now we can just relax and watch good football without worrying who will win.” Though for him (as for many others in the crowd), this meant following Spain, the team which they could presumably relate to most easily. Unsurprisingly, however, there was also considerable support for Holland in the Final, as the scar tissue from the Spanish conquest lives on 500 years later. Some closely followed one big favourite: “Germany wouldn’t be so bad. They score a lot of goals” according to Javier, a student at Universidad Catolica who had brought some work to do at half-time.

Unfortunately, not everyone enjoyed direct access to the football. While even some of the poorest people have makeshift televisions at home (visit any dwelling in El Alto for evidence of this), the majority don’t have access to cable TV, a luxury costing upwards of $20 a month. Exclusive deals with these companies left millions of Bolivians without a chance to watch the action from their homes. The serendipitous outcome of these social inequalities is the mass confluence of paceños at the large Samsung screens, which can attract crowds of up to 800 people. I was fortunate enough to watch the Final in a comfortable apartment in the Zona Sur of La Paz. With a pretty even split between Dutch and Spanish supporters, it was a very social affair: beer flowing, jokes flying back and forth, and everyone trying to outdo each other with knowledge about anything and everything that was remotely related to football. This just reinforced the impression I had already formed; that Bolivians follow football with a raw passion for quality and magic, thousands of miles away from the money and glamour that have tarnished the game in Europe. Official-shirt-clad or wearing abarcas, clutching a pocket-radio or a can of beer, football fanatics in this country will take any opportunity to revel in 90 minutes of sweat, glory and frustration, especially when the whole world is watching.