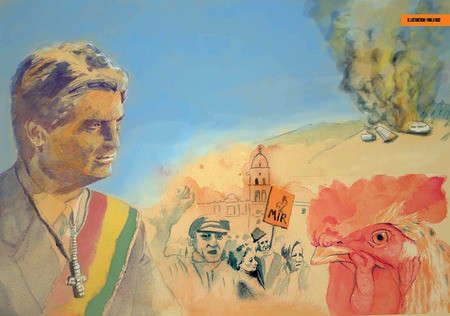 Bolivian Express talks to former President Jaime Paz Zamora to understand what the goalkeeper-turned-deacon-turned-politician got up to after retiring from public life.

Former Bolivian President Jaime Paz Zamora founded the Movimiento de la Izquierda Revolucionaria (MIR, or the Revolutionary Movement of the Left) in April 1971. Its symbol, an orange rooster, lent Paz Zamora the nickname of El Gallo. Once an important revolutionary figure who fought to put an end to dictatorships, there are credible conspiracy theories that his assassination was planned by a military regime in an infamous plane incident in 1980. The crash left him with third-degree burns and marked him forever after with a distinctive visage.

The MIR gained power when, in 1982, it formed part of the UDP (Democratic and Popular Union) coalition which won the presidential election with Hernán Siles Zuazo as President, and Paz Zamora as Vice-President. In 1989, Paz Zamora defeated former dictator Hugo Banzer in a congressional vote to become president himself. His administration is credited for important steps towards gaining a sovereign coastline for Bolivia, but tarnished by drug and corruption scandals. Most intriguing of all are the political alliances he formed with Hugo Banzer during the 80s and 90s; the very person whose brutal regime he opposed and resisted during the first years of the MIR. Politically active for over 30 years, he has been virtually absent from public life since Evo Morales’ election in 2005. BX got in contact to learn more about El Gallo, and what a former president does with his time when he’s not planning a return to power.

*Interview has been edited for clarity and length.

BX: In historical terms, what can you tell us about your administration and legacy?

JPZ: That is the problem. People think we are history but we are actuality.
When democracy started in 1982 it marked a true change of era. We have since lasted 31 years in a democracy. While this is history it is also relevant to the country’s present. Secondly, it was during this democracy, and specifically during the 1990s when large gas fields were discovered and which are now to thank for the economic bonanza the country is going through.

Democracy and gas are the absolute mainstays of change that Bolivia has experienced as a country. However, the extraction of gas must be monitored and the public frivolity and inability to reinvest must be criticised. We need a solid economy. Sánchez de Lozada, president between 2003 and 2005, aimed to ‘capitalise’ on the gas fields but instead handed them over to the multinationals. After the new Hydrocarbons Law passed in 2005—which President Carlos Mesa did not want to sign but which was passed by Congress—Vaca Díez, a MIR parliamentarian, promulgated the law which nationalised the hydrocarbons. What the current president has done, and has done well, is implementing this law. The MIR also signed the gas deal with Brazil, which is what keeps the country going. Yet at the current rate we will have gas for another 40 years before it runs out.

BX: Could you tell us about your brother, Nestor, and his influence on your life?
JPZ: My brother was more creative than me because he was an artist; he was a man that loved life. In the countryside, he called for the need to have a caring feeling around us —a changed society, a new society. Love was at the centre of the change; you cannot have a society if there is no togetherness. In 1970, he died from starvation, but he did not surrender. We need to build a caring society. He had an interesting idea that Pope Francis could use today. He said that love is the urgent need to solve the problem of others. Based on the experience of the sacrifice of my brother, we took the decision to fight for equality. This is where I started my political career.

BX: Tell us about your early career before becoming a politician
JPZ: I was educated in Leuven in Belgium. I financed my studies there by playing football, as a goalkeeper. But what defined me is that I was set to be a priest and studied philosophy and theology for seven or eight years. Today I am a deacon—it is an indelible mark. But my brother and I discovered that we had a political vocation, and that we wanted to make changes that we were not able to make from within the church.

BX: What have you been doing since you left politics in 2005?
JPZ: I did not retire from political life; there are many different ways of being involved in politics. I have been in the countryside working on land art. I have organized, and am about to finish, a large botanical park.

A government minister, Carlos Romero, asked me, half-mockingly, what I was doing these days, so this is what I told him, in the same tone, ‘I was busy making children’. I have one 9-year-old who represents Tarija as a swimmer—he is also a great goalkeeper. I have another one who is 7 years old.

BX: Why is art such an important part of your life?

JPZ: I feel like a frustrated artist who hasn’t been able to dedicate himself to art. I have this artistic vein, it is my passion, and I feel like a man that, in some ways, is tamed by art and beauty. Here I have art from the best artists in Bolivia. I also have some good pieces from artists from countries such as Ecuador. For example, Oswaldo Guayasamín, the Ecuadorian painter, and the best Latin American painter ever, in my opinion, made three portraits of me that I have here, three large oil paintings.

When I was in the presidential house in San Jorge I had a llama, a vicuña and some roosters. Realising that my personality was very confused with the image of the rooster, Guayasamín was in the process of painting a portrait and asked me to place a rooster behind me. By chance one of my best roosters was walking by. I still don’t know how, but he constructed the piece so that my face appeared to have a beak of a rooster.

BX: Where do you live?

JPZ: El Picacho is a 200-year-old house which has even witnessed the War of Independence. The property was abandoned by the last member of the Mendez family - Moto Mendez [an independence hero] used to ride his troops out of here on horseback. It was left abandoned until the 1980’s when a group of puppeteers took it over. Young people from the USA and Europe would come and do an internship here and construct puppets.

Living here for me has been a restoration challenge as well as an ecological challenge. I have a memorial here for César Vallejo, others for Pablo Neruda and Walt Whitman. I also have memorials for poets from Tarija such as Octavio Campero Echazú and Oscar Alfaro. I have trees named after them.

People tell me that El Picacho is like a monastery…and they are right in some way. It has a gentle tranquillity, it is a place for contemplation. El Picacho has many aspects, it has even become a political landmark; some presidents have spent the night here. The property was given its name because of a 10 metre-high rock beside the house which is in the shape of a beak [pico, in Spanish].

BX: What are your views of the current government?

JPZ: One must distinguish between an era of changes and a change of an era, such as the establishment of democracy. This is what Evo Morales is trying to do: he is still experiencing a change of era as part of the introduction of democracy. The government spends a great deal of money and invests a huge amount. When I got the presidency, Bolivia was a country living at subsistence level; our national income was $1.2 billion, today it stands at $16 billion. The GDP used to be $4 billion, now it stands at $30 billion. What is at stake today in Bolivia is what is going to happen with democracy. If anything characterises this moment in Bolivia, it is that the country is undergoing transition in which we don’t know where we are going. There has been a regression.

BX: What is the significance of the rooster and why did you choose it as the symbol for MIR?

JPZ: I think that the rooster is one of the great symbols of Bolivian politics. It is no longer just linked with the MIR—it is a symbol of democracy. The rooster announces a new dawn; it crows and maintains life in the hours of darkness. The rooster organizes cohesion and unifies the chicken coop. The rooster dies fighting, the real rooster, that is. The rooster does not give up; it fights. But at the same time it is noble. When its opponent is defeated, it retires. It is difficult to find a symbol that speaks to all Bolivians—from Uyuni to Puerto Suárez. This is why we chose the rooster.