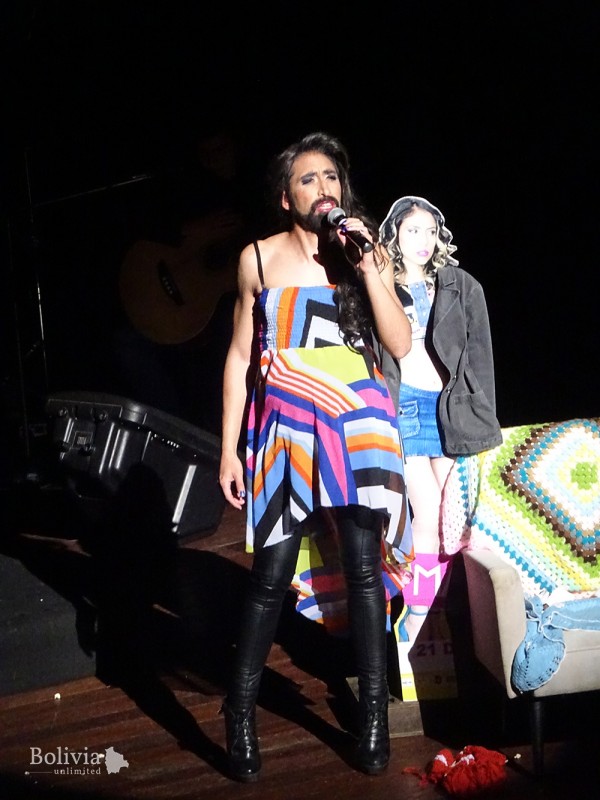 Denisse Arancibia is the mastermind behind the immensely powerful musical

The final showing on 4 July of the musical El Club de las Malcogidas brought an end to a production which took La Paz by storm for the past six weeks. The musical, whose title translates to ‘The Bad Fuck Club’, lived up to the hype of a theatrical performance encompassing boldness in every form, sharply written and directed by Denisse Arancibia and produced by Victoria Guerrero. The live performance is an adaptation of the 2017 film Las Malcogidas, also written and directed by Arancibia. Its plot centers on Carmen, played by Pamela Sotelo, who struggles through life due to her weight issues and inability to orgasm (hence the name of the production). Arancibia’s brother Bernardo plays Carmen’s trans sister, Karmen, and Marta Monzón plays the sisters’ grandmother.

An early scene sets the tone for the rest of the play. Álvaro, Carmen’s handsome neighbour (played by Kartiel Hidalgo), sits next to a plastic cutout of his girlfriend whilst eating a chocolate bar. Listening to his erotic over-enjoyment of the chocolate bar and noticing her family bashfully going about their daily chores, Carmen recognises that sex is happening all around her – and that she’s missing out on something important in her life. Her only hope is through her friend Lucho (Diego Paz), who works with Carmen at the only adult movie theatre in town. Despite the affection he shows her, she continually rejects his advances until the end, when she falls into his arms.

‘People see themselves in the mirror on a daily basis and don’t want to laugh, but it is easy to laugh at others, who are acting on stage, for the same reason.’

The production has many more underlying themes than just Lucho’s battle to win over the gorda, as Carmen is regularly called by her companions and grandmother. Sotelo explains the musical’s approach to explicit themes creates a feeling of unease amongst the audience which eventually elicits laughter, rather than the musical a comedy itself. She notes that ‘people see themselves in the mirror on a daily basis and don’t want to laugh, but it is easy to laugh at others, who are acting on stage, for the same reason.’ An important meaning of the play is revealed just before the end of one scene, in which all the characters reveal inherent characteristics of themselves that indicate they all sobran – they are all lonely and unwanted. Carmen, for example, says, ‘Fat people sobran.’ Each of the characters has a shortcoming in her life; it’s the universal condition.

Musically, production is very powerful. ‘All the songs construct the narrative of the work,’ Bernardo Arancibia says, ‘and at the same time strengthen the characters.’ One song, ‘Bailar hasta caer’ (‘Dance until you fall’), by AtellaGali, is particularly relevant for Arancibia’s character, Karmen. It was this raw humour that left the audience in a state of unease, uncertain whether to laugh awkwardly or to sit in silence. So, too, was Lady Gaga’s ‘Born This Way’ a very apt song choice, bringing to the fore the issue of sexuality and gender in Bolivia.

Musical director Miguel Vargas worked with the house band, las Mentes Ociosas, to tightly connect the music to the action on stage throughout the production. Like a Greek chorus, las Mentes Ociosas were consulted at times by Álvaro, who asks for their opinion on matters. They also play the part of Álvaro’s imaginary band, los Espermos (the Sperms) – and they face the wrath of Carmen and Karmen’s grandmother, whom Monzón plays with verve. Monzón, who played the same character in the film, says she had to adapt significantly to the demands of the play. ‘It’s a premeditated relationship between the actors, the director and the audience,’ she says.

‘All the songs construct the narrative of the work and at the same time strengthen the characters.’

El Club de las Malcogidas was a great success. The musical draws upon an array of modern issues and transforms its characters’ – and by extension the audience’s – often uncomfortable differences and flaws not just to create humour, but also to highlight that we all have our issues.

Now with a film and a musical under her belt, director Denisse Arancibia is ready to move on. ‘The film was the best project of my life,’ she says. ‘The play was the cherry on top of the cake, as a last taste to leave the Carmens behind and dedicate myself to new projects.’