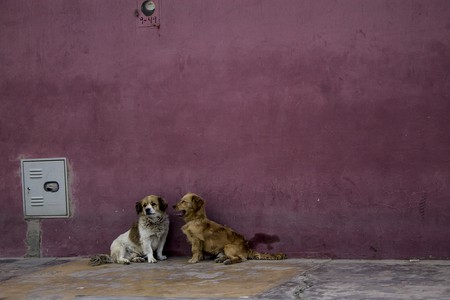 A short story by Lulu Shooter fusing Andean legends and English West Country roots. Is the grass always greener in your imagination?

‘This is exactly right, estúpido. You just add water,’

The cemetery’s bustle worried Cachorroz’s sleep like a puppy chewing on its mother’s ear. He reluctantly got up, and peered into the neighbouring crypt. The pigs were arguing about the best way to make barro pastelero. Cachorroz turned tail and pounded down the cemetery steps two-at-a-time.

Every day, Cachorroz escaped the cemetery to find his family’s fortune. Every night, before bed, his little brothers and sisters would take his empty paws and follow him down the rabbit hole of his imagination.

‘In Coroico’s cloud forest, there flows a sacred river called Quri Wayq'u,’ he began. ‘I was admiring the banks’ pink flowers when all of a sudden I heard some splashing. You’ll never guess what I saw. Some bright blue fishes were beckoning me into the deep water. I jumped in, and there, shining amongst the snakes and stones, was an ametrine gemstone . I grabbed it. It’s worth loads of bones.

‘Suddenly, more seahorses than you can imagine plunged out of the darkness and headed straight for me. We tumbled down the river in a frantic scrum, and everything around us blurred into a dark midnight sky. Praise Inti, a reed wrapped around my ankle and held me fast. The seahorses were swept away in the maelstrom. Inti came to me in the form of a vulture, and carried me back to La Paz.’

Once he’d finished his story, Cacharroz curled up on top of the pile of sleeping puppies and plunged further into his dreams.

‘Potato is the missing ingredient!’ Cachorroz watched the pig try and reassure her partner. She clamped a wooden spoon between her teeth and frantically stirred a smelly mess.

One of the puppies began chewing his tail. He whipped around.
‘Tell us a story, Cachito!’

‘You won’t believe your...’ he paused, ‘... Ears. Early this morning, I jumped on a minibus and headed for the distant Andes. I saw a pack of llamas wearing socks on their ears and hoped they’d trade me a pair for a story. I’d just taken a deep breath when suddenly a chinchilla hopped out from the belly folds of a sleeping llama. Instead of being content and warm - he was crying!

‘“Why are you crying, chinchillasito?” I asked.

‘“’Ere!” The chinchilla told me his story in a ridiculous country accent: “We was just mindin’ t’condors t’other week when some ‘orrible rats from t’city came over on one of ‘em tourist busses. We eat ‘em cactuses, right? They’re great: thirst quenchin’ ‘n’ loads of vit’s ‘n’ min’s. ‘Ere, these rats ate our ‘ole plantation! We’ve not got nothin’ to eat now! They keep takin’ our burrows ‘n’ all,”

‘Those countryside chinchillas needed a helping paw from a tough city pup like me. Back at his burrow, you’ll never guess what we saw: All the rats were sprawled on boulders clutching at their bellies and moaning. They’d eaten the whole cactus, spikes and all! We grabbed some sticks, and chased those blighters off the premises,’

Cachorroz tore his eyes away from the setting sun, and surveyed the puppies. The youngest were snoring whilst the eldest were restless still, barking at shadows. At least they share my imagination, he thought, looking around the bare crypt.

‘Tell us another one, Cachito!’

Cachorroz looked around for a bone.

‘This is the last attempt, alright?’ Came a cry from next door.

María’s experiment gave him an idea. His grandmother had once told him the legend of the kantuta flower, and now he could really impress the puppies with his own rendition.

‘Alright you lot,’ the puppies gathered round. ‘Have you ever heard of Santa Cruz? I was sunning myself with the sloths in the city’s main square when I got chatting to a toucanita. She invited me back to her nest. Lucky me, right? No. It turned out she needed help settling a dispute between two families. Well, I was too young for her anyway…

‘When we arrived, two royal toucans were embroiled in a duel. They squawked and flapped their battle cries, and darted at each other like hummingbirds. A second later, we watched their dead bodies crashing down through the trees. In the silence, I began to howl. And you’ll never guess what happened next. The branches began to absorb our tears, and suddenly the royal nests reached out and intertwined. Creepers knotted together and the bows of the trees became one. The families’ kids dubbed the formation a toucan temple to preserve the alliance. Obviously, yours truly is now the temple’s top dog,’

The last word was barely audible, as Cachorroz slipped into a deep sleep.

On the third night, Cachorroz was late back to the crypt. The puppies were waiting for him, eavesdropping and whispering.

A delicious smell drew the puppies’ noses to the pig’s crypt. A fine barro pastelero sat glistening in the sun.

‘Would you like some?’ María spied them, ‘I found a gas heater and remembered I needed to cook the cake! You need water, potato, kantuta and Inti’s breath!’

The puppies wagged their tails and edged closer, when suddenly Cachorroz exploded into the crypt knocking buckets flying and petals sailing.

‘You’ll never guess what happened in La Paz!’ He didn’t wait for an invitation to begin. ‘We thought those red orbs floating above the cemetery were dragons, but they’re actually flying minibuses! I flew across the city. A little bird drew alongside me and told me they’re called the ‘Tele-frío’. I got off the minibus and visited our aunt’s new litter in El Alto. They were clustered around a glowing book. It whirred and whined when suddenly their faces appeared within its pages. Apparently someone’s built a giant spiderweb across the world. You can climb across it and read a book about anyone. I think the spider decided to call it the ‘in-telaraña’, or something stupid. Well, this morning someone had climbed across the spiderweb and told our cousins about another flying minibus which could take you all the way from El Alto to the stars! I know the city like the back of my paw, so I set off to find it. You’ll never guess what happened next.

‘Around the corner of the Multifunctional there was a ladder with a little pod hovering above it. I jumped inside and in my haste, the ladder fell away. The pod floated towards our ancestors, and I was surrounded by a darkness dotted with magic spheres. I drifted in the direction of an emerald blue one. It was even more beautiful than the ametrine gemstone! The pod started rocketing towards it, and, I’ll admit, I got a bit scared. I closed my eyes until the door swung open and I was back in El Alto.’

Chanchitoz, who lived next door, had been listening the whole time.

‘There’s no way you jumped on the Teleférico, surfed Facebook and launched the Bolivian satellite all in one day. Only in your Wonderland, Cachito,’

‘Go out and see for yourselves!’ Cachorroz laughed. The reality was so much better than even he could have imagined.