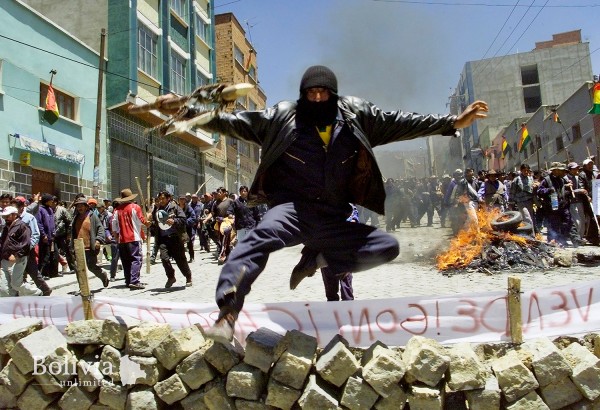 During Bolivia’s 2003 Gas War, alteños stood up to the neoliberal state, and in the process helped change history in an indigenous country long dominated by white colonisers. But the families of those killed in the conflict, and the wounded survivors, had to wait 15 years for justice.

In October of 2003, El Alto, La Paz’s sister city on the edge of the altiplano, exploded in protest in response to the announcement of then–Bolivian President Gonzalo Sánchez de Lozada’s government that it would begin exporting natural gas through Chile to the United States. When the dust settled, some 60 people would be dead and hundreds more wounded; Sánchez de Lozada would resign his presidency and flee to the United States; and the political foundation of Bolivia would undergo a profound transformation, in which indigenous cocalero leader Evo Morales would succeed to the presidency just two years later. The gas deal with the United States would die after the uprising, and a new, indigenous-led political landscape would begin to take shape. But the bereft families of 60 dead alteños, and the wounded survivors who had to begin new lives with debilitating injuries, would wait over a decade before seeing some form of justice – that is, until earlier this year, when Sánchez de Lozada and his former minister of defence, Carlos Sánchez Berzaín, were finally held accountable for the violence and deaths during those fateful days.

On 3 April 2018, a US federal jury found Sánchez de Lozada and Sánchez Berzaín to be responsible for the deaths of nine protesters during the Gas War, and they were ordered to pay US $10 million to the victims’ survivors. The case was brought about by lawyers from Harvard Law School under the US Torture Victims Protection Act, which allows for civil suits in the United States against individuals who, acting in an official capacity, commit torture or extrajudicial killings. Thomas Becker, who initiated the case in 2005 as a student at Harvard Law School and is now an attorney at Harvard’s International Human Rights Clinic, explains how he inadvertently stumbled onto the case: ‘I came [to Bolivia] in May 2005…before I started law school, just to learn more about Bolivia and practice my really bad Spanish.’ Demonstrations had erupted in El Alto to protest the presidency of Carlos Mesa, Sánchez de Lozada’s successor, and La Paz was cut off by blockades. Becker was forced to walk to La Paz’s Sopocachi neighbourhood, where he was staying. ‘The city was shut down,’ he says. ‘I had to walk from the airport with my gringo backpack, and I had to walk through tear gas and blockades. And truthfully, that's where I first learned about what happened in 2003.’

Bolivia has a history of protests. As even travellers quickly learn, blockades, in which demonstrators cut off access to cities and towns by obstructing roads with large rocks or felled trees, are a way of life here. Reasons can vary from the prosaic (though still unjust), such as landowners limiting grazing rights to tenant farmers, to the critical, such as when Santa Cruz, the country’s largest city and the seat of its industrial base, was blockaded in late 2008 for weeks due to clashes over the Media Luna’s attempt to achieve greater autonomy.

Historically, these blockades have been a response of the powerless minority to hold some sway over the political elite. Nearly 300 years ago, indigenous revolutionary Tupac Katari led an uprising against the Spanish colonial occupier. His siege, centred in El Alto, lasted six months and blockaded La Paz completely before Spanish reinforcements crushed the insurrection.

And so this spirit of protests, demonstrations, even insurrection is commonplace in the Bolivia of today, and certainly it was 15 years ago, as Sánchez de Lozada’s neoliberal reforms were confronted on the edge of the altiplano.

In 2003, Mónica Apaza was a youth leader of the Federation of Neighbourhood Councils-El Alto (FEJUVE), an alteño social-justice organisation. She’s now part of the Jach’as collective at Radio Pachamama, a radio station in the La Ceja neighbourhood of El Alto whose reporters covered the Gas War extensively. She remembers the events leading up to the conflict: ‘So Goni [Sánchez de Lozada’s nickname] wanted to export gas via Chilean ports… We decided that this shouldn’t happen. We convened all the presidents of the FEJUVE of El Alto and we organised an assembly. We discussed that declaration from Goni, and we agreed that we wouldn’t let this happen.’ The protesters started with three days of blockades, and the demonstrations soon grew to include much of El Alto.

Sánchez de Lozada and Sánchez Berzaín ordered the military to contain the protests in El Alto. According to witness testimony at their trial, in meetings they discussed mass killings to suppress protests. ‘They needed to send the military, bring in the military from the east, because the people from the altiplano wouldn't kill their own people,’ Becker says. And, as a witness said at the trial, ‘They need to kill a thousand people to send a message to the social movements.’

And thus the killings began. The military fired blindly into crowds. One of the first killed was an 8-year-old girl. David Inca, a human-rights activist who is also a  member of the Jach’as collective, was helping the injured as the military started its attack. ‘People were screaming: “There’s a fatality! There’s a fatality!”’ he said. ‘It was a [another] kid that had died… The neighbours took me to where the kid had died. The boy wasn’t there anymore, but I met his siblings and the grandma and they showed me where it had happened… There was a lot of blood. I never saw the boy, but they showed me from where he had been shot, from a bridge, Puente Bolivia. What shocked me is that it was very far away, the boy’s house was really far away from the conflict. It was strange, why did they shoot the boy?’

Casualties started to add up: A pregnant woman was gunned down in her house. Even soldiers were attacked by their fellow conscripts. Ela Trinidad Ortega was brutally beaten by the military after she witnessed a high-level officer execute a conscript who refused orders to shoot upon the unarmed crowd in the Río Seco neighbourhood. Another officer ordered her to be executed, which she only narrowly survived because a distraught, crying conscript, not wanting to kill her, begged her to play dead. Fifteen years later, she told her story in the US court as Sánchez de Lozada looked on impassively.

Eventually, the demonstrations subsided in El Alto, and the extrajudicial killings by the Bolivian military slowed and ceased. But the country was in chaos. Popular outrage over the killings eventually forced Sánchez de Lozada to resign his presidency and eventually flee the country. Carlos Mesa, his vice president, continued to have difficulty with mass protests throughout the country, led by one ascendant cocalero. Soon, Evo Morales would be elected to the chief executive position, and a new indigenous-led government would grab the reins of power.

And here we are today. The Bolivian state, despite having weathered several more fractious political confrontations, seems relatively stable, given its past. Justice, in part, has been served to Sánchez de Lozada and Sánchez Berzaín. They remain free in the United States, but they have been found culpable by a US jury in the killings of nine people during the Gas War of 2003, and they are now legally compelled to pay out US $10 million to the survivors. But, as Thomas Becker says, ‘Money isn’t justice.’ Justice would mean that that those that were killed would still be alive, and of course that cannot happen. Frankly, Goni and Sánchez Berzaín should be here, and they should be tried in front of Bolivians,’ Becker says. ‘And the Bolivian people should decide whether they are responsible or not.’ But that isn’t an option, at least for now, as the United States has refused to extradite the two despite repeated requests from the current Bolivian government. Sánchez de Lozada and Sánchez Berzaín ‘chose to go to the United States and use the United States as a refuge,’ Becker adds. ‘So the victims followed them there, which I think is a powerful message, that OK, you can run away, but we’re never going to let you rest.’