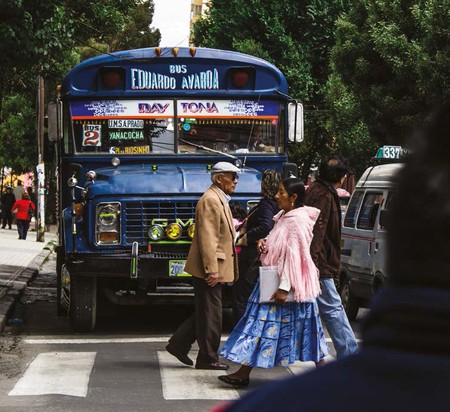 These famous blue buses began circulating around the city of La Paz in 1938, and have since become iconic. They barely need signs anymore as they are instantly recognisable from as far as the eye can see; even their grumble is distinctive.

The first buses were known as the Chaucheros, a word now used to denote the knitted purses cholitas carry around (presumably because the passengers who traveled on them were tightly crammed together). Today, with its 51 years in uninterrupted service, ‘El Inmortal’ remains the oldest of the 80-strong fleet of #2 buses, though several aged others are at least four decades old.

The bus route could just as easily serve as a tour service through the Old Town of La Paz. It is a journey which begins and ends in the same stop as it cuts through the eternal traffic jam on Buenos Aires avenue, traverses the Max Paredes district with its busy merchants, trundles along the innumerable schools on Avenida Armentia, and winds through the residential Sopocachi district. It then repeats the same cycle.

One never knows what to expect; a miner´s protest, a civic parade or the majestic Señorial Illimani morenada dancers passing by. Yet the main road the #2 bus has had to travel down has, without a doubt, been the passage of time. Military coups and numerous strikes have left their mark on their rusted bumpers and peeling blue paint. Inside the bus, faith in the Copacabana Virgin is expressed through numerous ornaments. The historical Bolivian claim to the sea also finds a voice on stickers on the enormous rearview mirror. That and more, on the Colectivo 2.

The Colectivo 2 survived the city’s trams during the ‘40s, later to endure the minibus invasion during the ‘80s and ‘90s. Today, in the times of the teleférico and Puma Kataris (refer to other articles in this issue to learn more), it will have to adapt to maintain its sustained popularity, especially when Supreme Decree 890 comes into effect in 2018. This law prohibits the movement of vehicles which are more than 12 years old. For the time being it is fair to say these ancient buses are neither coming nor going, but always somehow there. 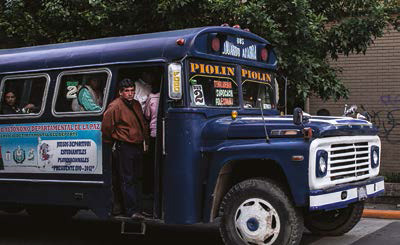