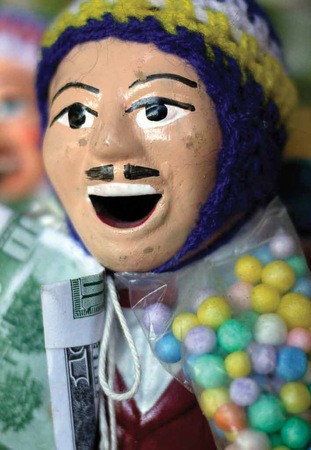 Cast a look into many Bolivian homes, and you'll likely spot a small, moustachioed ceramic figurine called an Ekeko. These jolly-looking statuettes resemble small men in Andean attire with enormous smiles, and they usually bear accessories that represent goods people want to obtain in the coming year. They represent a pre-Colombian god of fertility and abundance, and they're typically given to newlyweds and people who are moving into a new house, in order to bless them and ensure prosperity in the future.

While the provenance of the Ekeko figure is obscured in history, some scholars date it back to the Tiwanaku culture, which was dominant in southern Peru, northern Chile, and western Bolivia over a thousand years ago. The Ekeko god was revered as a phallic symbol, responsible for male fertility. Later, the Incas adopted the Ekeko, whom they called Iqiqu. He wandered the altiplano, bringing harmony and abundance wherever he roamed. Then the Spanish arrived. According to legend, they were wary of the Ekeko's power and the devotion he inspired in the people, so they captured him and cut him into many pieces, which they scattered across the land so that the Ekeko could not come back to life.

But the Ekeko didn't die. In fact, his beneficence toward all, even toward the Spanish, would provide his lasting legend. In 1781, during an indigenous insurrection led by Tupac Katari, an Aymara army surrounded La Paz and laid siege to it for six months in order to force the hated Spanish occupier out. A young soldier in Katari's army snuck across lines into the city to visit his paramour, who was a servant in a Spanish officer's household. While everyone else in the city was starving, the young soldier delivered food to her daily in secret, laying it in front of the girl's Ekeko figurine. The Spanish officer, witnessing the appearance of food every day in front of the Ekeko—and perhaps willing to cast a blind eye to it as long as he received a cut of the food—popularised the legend of the Ekeko when the siege was finally lifted, and he's now known to help provide for people in need.

While the Ekeko is now largely denuded of his religious connotations, his cultural significance abides. He's the star of the Festival of Alasita, and now some are appropriating the Ekeko's traditional macho aspect and giving it a feminist spin. Mujeres Creando, a women's collective located in La Paz's Sopocachi neighborhood, has introduced a female Ekeka to be debuted at this year's Festival of Alasita. This figure is a representation of the cholita, the indigenous female archetype that dominates the altiplano. It shows the burdens that women carry— including, in some depictions, a drunk male—in addition to the material goods they provide.

But far from being a radical reinterpretation of folklore, the Ekeka might be a rediscovery of ancient beliefs. Some researchers have recently unearthed legends that indicate there was once a female Ekeka god, one also worshiped for fertility, abundance, and prosperity. It would make sense, as Aymara belief typically emphasises duality in nature, stressing the importance of both the female and the male.

But even as the Ekeko has changed throughout the centuries, one thing remains the same: you should never purchase an Ekeko for yourself. In the true spirit of his mythological spirit of giving, the Ekeko only blesses those who receive him as a gift.