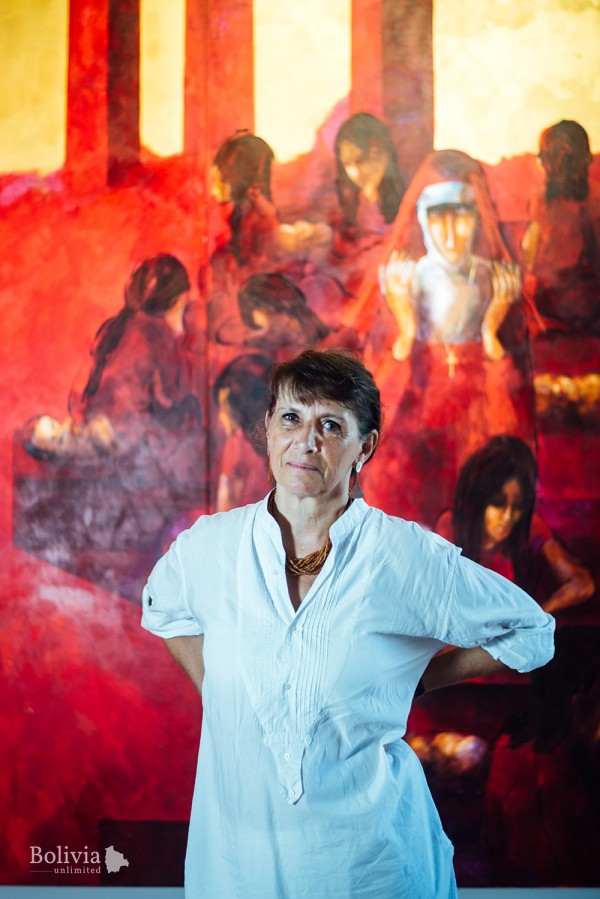 A tendentious exhibition from the cruceña artist looks at abortion

The red-tinged brick Santa Cruz Cathedral towers above the city’s central square, the Plaza Principal 24 de Septiembre. Beneath the oppressive sun, cruceños sit on park benches underneath palm-tree canopies, sipping cafés con leche as dusk slowly creeps over the city. Nearby, the sculpture garden of the Galería Manaza slowly fills with people as the hot, humid day gradually turns into night. Inside the gallery, blood-red and gold paint throbs on the studio’s walls. Sinister clergy and nuns are depicted hovering over piles of babies’ bodies. A young women gazes down at gallery goers with her face frozen in a rictus of immense sorrow. A blindfolded figure of Justice uses a long knife to slice at a bloody umbilical cord from which a newborn child swings like a pendulum. A devilish angel scoffs at a black plastic garbage bag ominously crammed full of… what? Does the viewer even want to know?

Welcome to Rojo y Oro, a new exhibition by the Slovenian-born artist, Ejti Stih. Born in communist Yugoslavia in 1957 and a resident of Santa Cruz since 1983, Stih explains how she conceived of her exhibition. A few years back, she says, ‘There was a case of a girl who was 11 years old, and she was raped by her stepfather. It was a public case, and her mother was on television, with a bag on her head [to hide her identity]. She was asking for the abortion. There were newspapers and the church and social workers and everybody was commenting on it on the television – and it was so terrible because nobody asked the girl what she thought.’ The court ruled that the girl had to carry her baby to term. A year later, the baby died. ‘It was a difficult case,’ Stih says. ‘I am also a mother, I also have a daughter, and I was deeply moved.’

In response to the media spectacle surrounding this case, Stih created Homenaje a la niña violada, a painting depicting a young girl, naked and vulnerable, surrounded by the violently abstracted figures of politicians, clergy and the public. The girl cowers at the bottom of the frame, trying to shield herself from the frothing masses. ‘This painting was hanging in our house for years,’ Stih says, ‘and these stories go on every day.’ Then, late last year, as lawmakers started to consider a new penal code that would allow abortion in a few special circumstances (which ultimately failed to pass in the Bolivian legislature), Stih decided to return to the subject.

‘Women sometimes have to [get an abortion] – there’s no other choice. And they will do it.’

‘When I was thinking about making this exhibition,’ Stih says, ‘I remember that I was with two friends at a dinner and I said that I was thinking about this abortion series, and they said, “Don’t! Don’t!”’ Stih laughs. ‘I mean, I don’t care! [Abortion is] a question of social health. Women sometimes have to do it – there’s no other choice. And they will do it.’

It’s a difficult exhibition to view, full of sorrow and the suffering of women who must deal with unwanted pregnancy or the danger of a clandestine abortion – and the indifference of the church and the state to this suffering. ‘In poor countries, poor people, poor women suffer most,’ Stih says. ‘There’s a lot of suffering in vain.’ As the exhibition’s title suggests, the paintings are primarily in a deep, thick red and a shimmering gold. ‘This gold has to do with ancient, old, religious paintings,’ Stih says. ‘Gold is a colour that doesn’t define space, because when it’s gold it might be far away or near – it represents eternity.’

Stih studied at the Academy of Fine Arts in Ljubljana, Slovenia. After graduating from the academy, she followed some Bolivian friends of Croatian descent to Bolivia, where she’s lived ever since. She’s exhibited her work throughout Europe, Central and South America, and the United States. Although she primarily focuses now on painting, she’s also created lithography and ceramic pieces. In contrast to her current exhibition, which can be gloomy, Stih is quick to laugh when speaking about herself and her artwork. She glad-hands admirers warmly; several times when speaking about her work in the gallery she is interrupted by women, some in tears, who tell her how affecting her artwork is. Stih is quick to chat them, and to offer a hug.

Steven and Kenyon Hall, two Bolivian-Americans visiting from Washington, DC, said they were moved by the exhibition. ‘If anything, it definitely makes us question ourselves and what we think, and hopefully people come in can see and think for themselves,’ Kenyon says. ‘Especially, I hate to say it, men – they come in here they see and think about how this could be their mum or sister.’ ‘When we first walked in, I think the first emotion that I felt was, I felt a little uncomfortable, and I think that’s great,’ Steven said. ‘It sparks conversation.’

‘In poor countries, poor women suffer most. There’s a lot of suffering in vain.’

But Stih’s oeuvre isn’t all ponderous and weighty. Some of her past paintings are quite light. Her Nuevas Evos series, created back in the early days of Bolivian President Evo Morales’s first term, is a lighthearted look at the politician in which he’s depicted in many different traditional costumes from around the country. But even in these whimsical-looking pieces, there’s a deeper political message. ‘When Evo started to be the president, it was very difficult,’ Stih says. ‘It was a big confrontation between this Media Luna, the eastern part of Bolivia, and the rest of the country. It was politically very unstable. So I was thinking that I came so many kilometres – thousands of kilometres – away from Europe, away from Yugoslavia. I came so far and now this situation is the same because it was the war in Yugoslavia,’ in which the country splintered, something that was being threatened by the media luna in Bolivia in 2008. ‘Everything happened because the country split. So I said, “It can’t be! It can’t happen! This can’t happen to me again!”’ She created the Nuevas Evos series to humanise the new president. ‘I found it so nice, nice to the people, a nice present,’ she says. ‘That’s why I made the series.’

The power and pain apparent in Rojo y Oro, though, don’t make for a nice present, something that Stih acknowledges. ‘Who can have this in their house? Look at this painting! It’s impossible!’ she says, laughing. ‘I always make a joke. I create [other] paintings that combine with the sofa. Paintings that combine with the sofa have to have the proper colour for the living room, and the theme shouldn’t be as tough as this [to sell].’ Stih gestures at the morose paintings on the gallery’s walls. ‘So this will stay in my depository, and the others will help me live,’ she says. ‘That’s how I survive.’