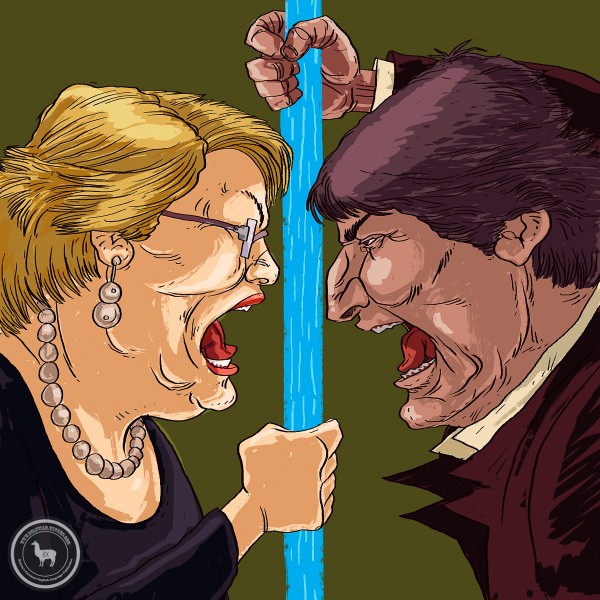 The legal battle over a riachuelo

Along the southwestern reaches of Bolivia, in a desolate section of the Departamento de Potosí, a freshwater spring seeps to the surface of a grass-covered valley known as the Silala Pass. From its source the water will crawl for the next eight kilometers: crossing from Bolivia to Chile, flowing from canals to piping, and from piping to Chilean taps, bringing water to the Atacama, the driest non-polar desert on earth. Despite its seemingly insignificant size, it is the subject of a prolific regional dispute. Being a vital resource to Chile, whose private companies use the water for industry, and a symbol of sovereignty to Bolivia, which has sought recompense for water usage by Chile since the mid-1990s, the waterway stands larger on the world stage than it does in the world.

Strained relations between Chile and Bolivia are bristling around international water policy. Bolivia's crippling loss of access to the Pacific Ocean in the latter half of the 19th century has maintained relevancy in a slew of recent conflicts. In addition to Bolivia’s claim to maritime access, Chile and Bolivia have also been struggling over the use of the Silala, a case that Chile brought to the International Court of Justice (ICJ) in June of this year. Though there are currently three transboundary waterways in contestation between the two states, the Silala will be the only one dealt with in the court, located at  The Hague. Chile’s objective is to have the waters declared an International waterway, entitling it to half of the water the spring yields. Defining the waterway and unraveling its muddled history will determine the outcome of the suit.

Diplomatic relations concerning the use of the Silala began in 1908 when the Ferrocarril de Antofagasta y Bolivia (FACB), then a British company, requested concessions to use the Silala. The request came in the shadow of the War of the Pacific and it’s resulting tratado in 1904, and offered no recompense for the scarce resource. ‘Bolivia signed the treaty with a pistol to their head,’ said Leo Robles, a Chilean journalist who covers the dispute regularly. When FACB, a company vital to Chilean development, requested concessions, ‘Bolivia knew there was nothing it could do… so it just signed it.’ The water was used for laying railroad spikes and powering the steam engine locomotives until the early 1960’s, when the locomotives were transitioned to run on diesel. ‘In Spanish we say the concession is extinguished,’ explained Andres Guzmán, a foreign policy analyst, on the change in fuel. FACB’s concession became moot as its consumption lessened, and other companies began to rely on the Silala. From the moment FACB stopped using steam engines, ‘it was illegal to use the water in Chile,’ says Guzmán.

The waterway stands larger on the world stage than it does in the world.

In 1997 Bolivia revoked the concession. Thereafter, it demanded payment for the previously gifted resource. The 2000s saw numerous failed attempts for both recompense and negotiation. In 2009, Chilean and Bolivian delegations convened to negotiate a 17-article agreement concerning each nation's right to the water. Though terms were agreed upon, the talks fell through. Regional petitions demanding that Chile pay its historical debt, which included recompense for water drawn from the Silala since 1908, totaling some 1 billion $USD, were accepted by the Bolivian government. ‘There has been no diplomatic progress since this happened,’ states Guzmán.

Since the failure of the 2009 negotiations, Bolivia has attempted to utilize the Silala in several projects. Researchers, national diplomats and regional functionaries have offered various proposals, none of which have come to fruition. ‘It is difficult for us to access,’ explains Guzmán. The remote location makes agricultural use disadvantageous. Water flow is too low for profitable yields of hydroelectricity. A small contingent of soldiers, manning a border outpost established in 2006, and stray llamas constitute the entirety of Bolivian consumption. Meanwhile, the prodigious use of the water by Chilean industry has not faltered.

The Antofagasta region of Chile maintains a difficult balance between potable water and water used for industry. Chile consumes an estimated 4.8 million cubic meters of water from the Silala annually. While the exact division of the volume is unknown, it is shared between various mines, owned by Corporación Nacional del Cobre de Chile, and the cities of Baquedano and Sierra Gordo for potable water.

Recent water shortages have impacted Chile's mining operation, which is responsible for nearly a third of the global copper production. The amount of water required for the extraction process and the aridity of the Atacama, make the proximity of the Silala vital to the industry. Chiquimata, the largest open pit copper mine in the world, is a State-owned enterprise that produces 500,000 tons of copper annually and relies on the Loa River and the Silala. The potable water drawn from the Silala is supplied to Baquedano and Sierra Gordo by private companies. ‘They are receiving the water for free, and they are selling it,’ says Guzmán.

Legality aside, the fight for the Silala has an evident political dimension.

The lawsuit will determine whether the Silala is an international waterway, but defining the water is difficult. Several factors obstruct an already complicated case. The Silala refers to ‘a subterranean aquatic system that surfaces in Bolivia and has been artificially canalized to flow into Chile,’ says Guzmán. Yet little is known of the aquifer. If it is discovered that it extends beneath Chilean soil, then Chile could claim partial drawing rights.

If the watercourse is defined as a transboundary river, it would be subject to a number of international laws that would also give Chile access to the resource. This outcome, however, would require proof that the water flowed naturally into Chile prior to its canalization in 1908. Though there is evidence that suggests this, the Silala appears to have done so only intermittently, which would exempt it from transboundary water law and reaffirm Bolivia’s claim of ownership. The battle, then, would be over the murky history of eight kilometers of water.

Legality aside, the fight for the Silala has an evident political dimension. For Bolivia, it is a matter of national sovereignty, a question of standing up to a historically dominant Chile. ‘We are tired of hearing that Chile is using our water,’ concluded Guzman. For Chile, the Silala stands for private industry, and a manner of correcting a pestering Bolivian behavior. ‘It is a matter of justice,’ insists Robles, an admitted Bolivian sympathist. ‘The river itself is insignificant.’