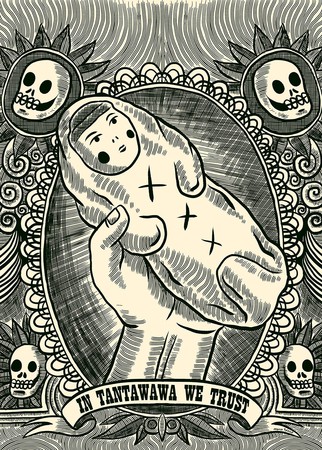 In November 2012 we published an issue titled ‘Passing’; a monochrome collection of articles and images on the more solemn aspects of Todos Santos, the day in which the living remember and pay tribute to the dead. Yet it didn’t take long for us to realise that death and its associated rites are not necessarily as sombre as we then made out. Or at least that we had only told part of the story.
On the 2nd of November the General Cemetery is filled with thousands of mourners, but also musicians, flowers and laughter.
After midday the families take their mesas to Chamoco Chico, where the atmosphere becomes more celebratory, amid the sound of pinquillos, the taste of beer and the treacherous nectar of Caimán alcohol.
Last year we also witnessed—and OK, partook in—the demonisation of Halloween (which we then facetiously referred to as ‘Jailonween’), a tradition still widely seen as alien to Bolivian traditions; a symptom of the growing invasion of American decadence and consumerism. But we noticed the green shoots of some important changes this year. From cholita zombies in haunted houses across the city, to the incorporation of local legends in the production of horror films, there has been a partial appropriation, or nationalisation, of foreign traditions. Some have even called it ‘Ajayuween’, and have proposed that children be given t’antawawas and fruit instead sweets when they go trick-or-treating.
In choosing ‘spirits’ as the theme of this issue, we have tried to bring out the explosions of colour, and even intoxication, that often take place in the realm that opens up between the living and the dead during this time of the year. And of course, to talk of ‘spirits’ also gives us an excuse to take an alcoholic tour through some of the best (and worst) traditional local drinks. But beyond the fiesta, have also wanted to pay tribute to the revolutionary spirit of the Bolivian people on occasion of the 10 year anniversary of Octubre Negro, an event which gave way to historic social uprisings which went on to define the country’s present and will continue to mark its future for generations to come.
This is our first-ever fully-illustrated issue in recognition of the fact that spirits, of all things, can’t really be photographed.