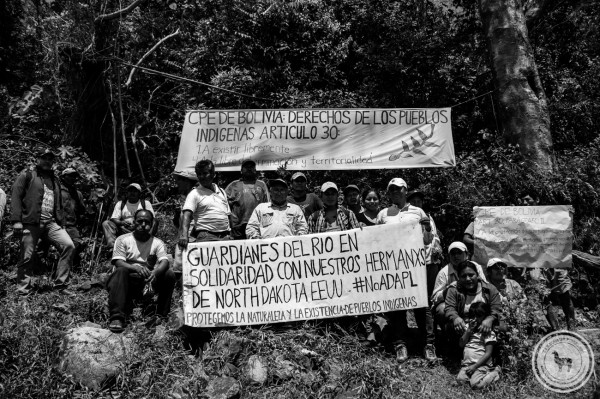 The struggle over the dams in the Beni River

On a humid and sunny day I traveled back from Madidi National Park on a wooden boat to the town of Rurrenabaque. The muddy Beni River streamed calmly towards the park’s gateway to the Amazon, occasionally interrupted by various rapids. Halfway through the trip, the boat driver slows down, gazing into the distance. I see barbed wire strung across the width of the river coming closer. To my right, the riverbank is teeming with people, holding up banners with bold slogans such as: ‘¡No a las represas, si a la vida!’ (No to the dams, yes to life!)

Through the month of November, the El Bala Strait, located in the Madidi National Park, was host to several indigenous communities protesting against the plan to construct massive hydroelectric dams in their rivers.

Miriam Pariamo, vice president of the Center for Indigenous Women of North La Paz, explains the nature of la vigilia. ‘The government thinks it can just interfere in our territory, but we do not accept this,’ she says. Pariamo’s legal claims are based on Article 30 of the 2009 Bolivian Constitution, which recognizes right to autonomy and self-determination of indigenous nations as equal of that of the State’s justice system. The government, however, has yet to consult local communities on its plans to construct the dams. ‘We have been living here for centuries and the rivers belong to our territory,’ she says.

Many opponents of the dam believe the project will have devastating human and environmental consequences. According to the Fundación Solón, an organization that analyzes environmental issues, 1,931 square kilometers will be flooded, equaling five times the surface of La Paz. It will transform the the surrounding environment, destroying one of the most biodiverse places on Earth. The foundation estimates that as a result, 4,000 people will be displaced from their homes along with the species that live and grow in the area.

Pablo Solón, director of the foundation and an environmental specialist, says: ‘The idea for this dam already has been on the table since 1958, but until today it has never been realized.’ Last year, however, the National Electricity Company of Bolivia (ENDE) commissioned Geodata, an Italian engineering company, to conduct a study on the construction of hydroelectric dams in the Amazonian-based Beni River. In August of this year, the Geodata team finished its study and proposed a design that includes the construction of two dams, one at El Bala and the other at El Chepete. ‘It is the largest energy-related project in Bolivian history, but, surprisingly, the plans have never been officially released for the public,’ says Solón.

In an interview with Abya Yala, a Bolivian television station, engineer Eduardo Paz, who is the executive president of ENDE, elaborated on the government's plans. ‘Bolivia needs electricity like any other country in the world,’ says Paz. ‘The dams will produce 3,700 megawatts per year, which is more than we use in Bolivia. They will not only serve the Bolivian people, but will also be beneficial to our economy.’ The project is destined for exporting electricity to Brazil through a pipeline that will run across the country, from Rurrenabaque to the Brazilian town of Cujabá, 1,500 kilometers away.

In the interview, Paz says that the dams will only affect the area minimally. ‘It will only have an impact on 1.9% of the protected area and not the previously proposed 16%. We don’t want to harm the people there. We have taken them into account in our studies,’ he says. Moreover, the government calculates that the dams will create 60,000 direct and indirect jobs.

Solón questions the data and information released by the government, and claims the cost of the pipeline is not included in the budget proposed by Geodata. ‘6.3 billion dollars are estimated for the construction of El Bala and El Chepete alone,’ he says. ‘The investment for this project is incredibly large. It exceeds the country's total external debt.’ According to Solón, in a country like Bolivia, it is neither profitable nor viable to undertake the risk of such a large investment. ‘It is important that we as Bolivians participate in the discussion. The project doesn’t only mean a catastrophe for the Amazon. In the end, we are the ones who are paying for it,’ he says.

The government plans to begin constructing the dams in 2017 and to complete them by 2024. Nonetheless, they will have to deal with Pariamo and her fellow protesters to execute the project. So far, the protesters have managed to expel the Geodata engineers from the area and to hold the strait of El Bala for several weeks. Pariamo pledges to ‘keep on fighting until the government puts its plans aside’.

‘We will keep on fighting until the government puts its plans aside.’ - Miriam Pariamo, Center for Indigenous Women of North La Paz.

The economic costs of energy are high, but with the construction of the dams the people at the Madidi National Park will also pay a price. The flora and fauna of the Amazon will be lost, people's ways of life will disappear, and a portion of “the lungs of the world” will be destroyed. To prevent this, it seems the people at El Bala will raise their voices and defend their rights to protect Pachamama to the bitter end.