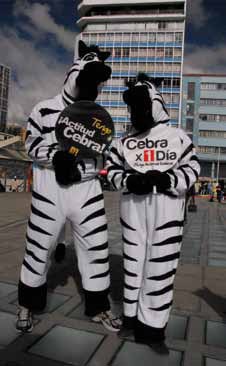 I never expected animal crossings in downtown La Paz. But a walk past San Francisco church between 8 and 10 am would make anyone take a second look. In the heart of the city, young adults dressed as zebras direct traffic. They prance around in the middle of the street as motorists whiz by them. I was half-expecting Robin Williams to swing in on a tree vine with the rest of the animal kingdom in pursuit like something straight out of Jumanji.

No, this is not Bolivia's version of an African safari, but it is still probably best to keep your hands and feet inside the vehicle at all times. Traffic in Bolivia is chaotic to say the least, so the municipal government decided to do something about it. The idea of having young adults (typically aged 16–22) dress up in zebra costumes and direct traffic was conceived in 2001. The goal was to educate drivers and pedestrians alike about the importance of the use of the crosswalk in a playful and artistic manner. In 2005, the Department of Civil Culture was created and extended the mission of the zebras to include urban hygiene, risk prevention, protection of green areas, prevention of violence, and alcohol abuse, as well educating citizens about traffic laws. In 2007, the Department of Civil Culture gained more power, making it possible to increase the number of zebras in the streets. The zebras have been around for more than 10 years now, and are still very active. Their current campaign is called, "Zebra for a day" in which individuals can dress up like zebras and direct traffic for a day.

I decided that I wanted to get in on the zebra action, so I contacted the Office of Civil Culture across from the San Francisco church and asked to be a zebra for a day. They were happy to oblige my request. At 8am on a Wednesday morning, I met a group of grassland animals at their usual watering hole. I was given one of their prized zebra costumes, the tallest one they had. Have you ever seen a six-foot zebra?

After I was kitted out with my black and white stripes, I joined the group of experienced zebras and we began to stretch. Stretch? Yes, stretching is an important part of being a zebra because no one wants to see a zebra grabbing a hamstring after dancing in the street.

As I was doing my calisthenics, I was briefed on the "dos" and "don'ts" of "zebra-ing" by the director of the program, Kathia Salazar. I learned that a zebra can ask a citizen to stop when the light is red, but they cannot physically hold anyone back. They can only ask people to follow the rules; they cannot force them to obey. I was also repeatedly reminded to say everything in a friendly manner, because the zebra's conduct is paramount to the success of the program. When asked what it means to be a zebra for a day, Kathia Salazar explained that being a "zebra for a day" means "to live the experience of helping people to improve their civic behaviours." Finally, she added that, "Each zebra walks differently. You need to find your individual step."

Now I was ready to step out into the dangerous streets of La Paz, and find my zebra walk. The light changed to red and the herd pranced out onto the crosswalk to entertain the stopped motorists and assist pedestrians across the street safely. Over the next two hours, I helped several people across the street safely and was even able to walk a little girl to her mother on the next block over. I covered my ears in dismay as drivers honked unnecessarily, and I danced in the middle of the street. But most importantly, I found my zebra step.