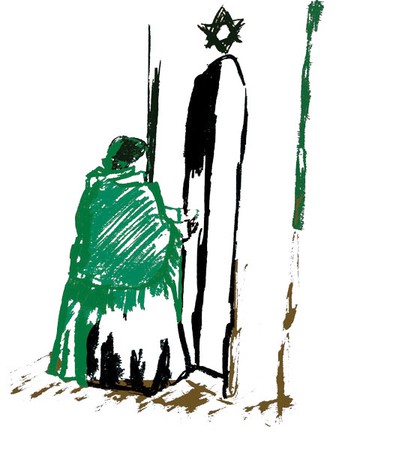 The number of Jews settled in Bolivia is declining, yet thousands of young Israelis continue to visit the country every year.
In a tribal sense, I have always felt rather anonymous. I don’t belong to any particular clubs, and my family aren’t religious, nor do we have any distinguishing traditions or customs. And yet, upon the passing of my grandfather in March this year, I realised that my previous perception of our lack of identity was a rather ignorant assumption. When my grandfather’s funeral was held in a Jewish cemetery, I had my first contact with a rabbi and I came to realise that, despite the fact that we are not practicing Jews, we are connected to something.

At first glance, it seemed that here in Bolivia the tribal element of the Jewish community is rather absent, partially because the Jewish population is so minute, so modest. With only an estimated 350-700 Jews in the country, it is unsurprising that many Bolivians continue to hold misconceived perceptions about the Jewish people’s lack of integration here. ‘It is a mistake’, states Ricardo Udler, the president of Círculo Israelita, the main Jewish organization in Bolivia. Udler is eager to explain that his community is not so esoteric as perhaps it is envisioned to be. ‘I am a Bolivian man’, he says. ‘I am also a Jew. The stereotype is that Jews only make money. That Jews live in ghettos only for Jews. This is what society thinks, but this is not true. Many Jews living here are in the professions, not only in commerce. We have doctors, lawyers, engineers. I myself am a gynaecologist. We work for the country, not for ourselves.’ Of course, Bolivian Jews hold close relations with one another as well: every Friday evening, many families congregate together for Shabbat, lighting candles and reciting blessing. Udler also believes that the size and dwindling nature of the Jewish population has made his community more religious, intent on holding together their tradition and beliefs. ‘Most Jewish families used to only go to the synagogue on a Friday night and a Saturday morning’, he says with pride. ‘Now, it is every Monday and Tuesday night as well.’

There are many different explanations for why the Bolivian Jewish population could be made to feel uneasy in the country. Most centre around Bolivia’s increasingly close ties with Iran, and stem from President Evo Morales’s relations with former Iranian President Mahmoud Ahmadinejad, who has made intemperate comments regarding Jews and Israel. These diplomatic ties are compounded rumors that Iran has provided funds for the new regional defence school of the Bolivarian Alliance of the Americas. There’s even speculation that trainers from Iran’s greatly feared Revolutionary Guard are consulting with the Bolivian Government. Closer diplomatic relations have also strengthened trade agreements, with both countries forming a partnership to exploit Bolivia’s vast lithium fields. These increasingly close ties, and Ahmadinejad’s anti-Israel rhetoric—not to mention his infamous questioning of both the existence and scope of the Holocaust—has worried Jews in Bolivia. (The new Iranian president, Hasan Rowhani, is more moderate, although some news sources claim that he was involved in the planning of the 1994 bombing of a Jewish community center in Buenos Aires that killed eighty-five people.)

However, Udler has a balanced view on this situation. ‘I respect relations between two countries’, he says. ‘There is no harm in Bolivia and Iran making deals for economical benefits, for example in transport and television channels. But Iranian penetration in Bolivia and in all of Latin America is a very, very dangerous thing. It is so sudden. Why now?’ Udler claims that Bolivian Catholics are being recruited for conversion to Islam, and that Islamic terrorism could make inroads into Bolivia, through Hezbollah. Despite these fears, Udler says that ‘politically, I have no Plan B. I was born in Bolivia, and I will die in Bolivia. My religion is Jewish, but I am a Bolivian citizen’.

Such political tensions haven’t yet deterred approximately 8,000 young Israeli men and women a year from making Bolivia their travelling destination of choice following their two years of compulsory military service—and unsurprisingly so, as they are well catered to. A synagogue located by the Witches’ Market in La Paz, near Plaza San Francisco, provides kosher food for travellers, while the nearby Hotel El Lobo has Post-it Notes on the walls that welcome visitors in Hebrew (although my monolingual ignorance meant that I could understand very little).

Sharon Malka, a young Israeli woman, describes her trip to Bolivia to me as a ‘right of passage’. Malka’s plans were to stay in La Paz before heading out to the ultimate Israeli tourist destination—Rurrenabaque, a tropical Amazon town that is the gateway for those wishing to visit Bolivia’s jungle region. Rurrenabaque was catapulted to Israeli fame in the ‘90s following the publication of Yossi Ghinsberg’s book Back From Tuichi. The book tells a dramatic tale in which two of Ghinsberg’s friends lost their lives in the jungle and, undefended, he encountered perils in the form of anacondas and jaguars. As a result, Ghinsberg is now a cult-like figure to young Israelis who come to Rurrenabaque specifically to follow his tracks.

There is a slow, inexorable diminishment of the number of Jews in Bolivia: Jews leaving for political reasons; Jews leaving for better opportunities in more developed countries; Jews leaving for a more secure religious base and a greater availability of families to marry into. This grim reality can be summarised by the words of an American Jew, Jonas Jacobs, who said that ‘there are more Jews in the cemetery here than in the streets’. But with an uncertain future for the permanent Jewish occupancy in Bolivia, it is somewhat comforting that some Jewish presence and tradition will continue to live on in Bolivia in the form of fresh and excited young Israeli travellers, eager to experience all that this fascinating and stunningly beautiful country has to offer.