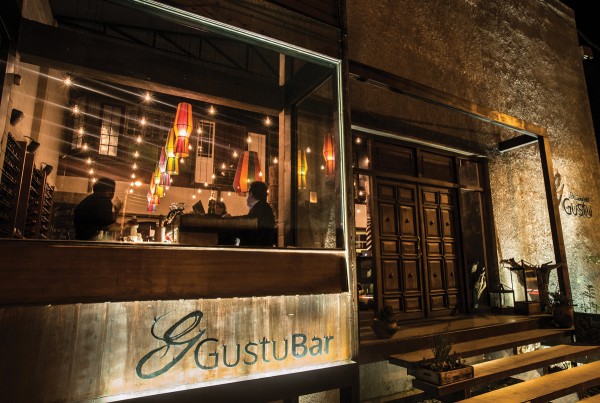 His sideburns are almost long enough to dip into the Bolivian beer every time his lips touch the edge of the glass. A light tip of the glass calmly flushes some of the golden liquid down his throat, extending his thick ponytail for a brief moment as he reaches his head back. ‘He’ being one of the two guys sitting at the bar with a blue light under the table top, which gives his  khaki trousers an interesting new colour.

The dedication to Bolivian ingredients in the Gustu bar, in the Calacoto neighbourhood of La Paz, means that the Danish founders haven’t sneaked in snaps – a strong Scandinavian liquor. Instead, the bar is full to the brim with bottles of just four different spirits of purely Bolivian provenance: singani, vodka, wine and gin. Yes, the bar does run with the same concept and philosophy as its food-making equivalent downstairs, founded by Claus Meyer (co-founder of Copenhagen-based two-Michelin-star restaurant Noma, awarded ‘best restaurant in the world’ a few years running). Apart from the Bolivian ingredients, local bartenders serve homemade creations straight out of the Gustu lab in the basement. The lab gives way for creations to blossom, and bar manager Alejandro Villanueva proudly talks about the bitters, sours, quinoa milk and new liqueurs being invented and tested.

‘We want to use only Bolivian ingredients and encourage Bolivian producers. That’s why I don’t see a future with whisky, for example. I know that in Bolivia we drink a lot of whisky – I do too. But we can make other things. We can create new kinds of liquors,’ says Villanueva.

This surely is the imaginative bartender’s playground. Saturday through Thursday is a build-up to the weekly contests where each of the mixologists present a newly invented drink to the rest of the staff every Friday. If the winning one is good enough, the drink wins a space in the menu. If not – work continues.

The contests, the experiments and the creativity make it a place for good friendship and teamwork, Villanueva explains. ‘It’s an encouraging environment. They surprise me every week when they decide to make something with tomato or achiote – a natural colourant used to make salteñas.’

So everything is made with new and – let’s face it – slightly strange ingredients. Still, isn’t it limited? Apparently not so much, according to Villanueva. ‘You can play and work with just three kinds of spirits and make a lot of things. We use herbs to put in the vodka, make an infusion and develop another kind of bitter. We make syrups with everything: lemongrass, cinnamon, pepper, locoto – it’s really nice.’

With all the inventing and creativity you may be led to believe that a visit to Gustu Bar could leave your bank account bleeding. But a crucial fact for your wallet is that enjoying the new liquids of Bolivia will do no such thing.

The average price for a drink lies at a sympathetic 40 bolivianos (just under US$6). The reasoning behind this is to encourage locals to come and imbibe; currently, tourists account for 60 percent of business. ‘We try to get more Bolivians, and that’s why we don’t want to be an expensive bar,’ Villanueva says. ‘We work with the quality and keep prices average.’

Yet it’s not just about reducing prices and concocting new creations. The masterminds behind Gustu have their work cut out for them – they are seeking to change Bolivian drinking culture.

‘I don’t think there is a drinks culture here in Bolivia,’ says Villanueva. ‘We have good products, very good bartenders and a lot of ideas. We can make a new kind of Bolivian cocktailery. Here in Bolivia they drink what they know. The Singani Sour, Chuflay, San Mateo, etc.’

According to Villanueva, Bolivian cuisine has been overlooked in the culinary world. ‘For a long time we didn’t feel proud of our local ingredients,’ he says. ‘With Gustu, we are making people proud of the things we have.’

The Gustu bar – like its older brother below – can’t escape its Scandinavian, minimalist surroundings. Wooden recycled doors and windows are put up to shield the bar from the restaurant. The once creamy-white paint on the old wood is peeling from the façade, bringing in a new Nordic retro feel.

But fret not. The whole bar scenario is spiced up with red-green-and-yellow Andean-style cushions, belying the notion that you are on a brief trip to Northern Europe and warmly reminding you that your feet are still firmly planted in Bolivia. At the same time, it may be a mistake to let the minimalism put you off. Villanueva, sprawled comfortably on a wooden sofa overflowing with soft cushions, points to the other tables in the bar. ‘It’s Bolivian wood,’ he says. ‘The chairs, the tables, the sofas – everything is Bolivian.’

On the chair (made in Bolivia) at the bar (carved from Bolivian wood), the man with the ponytail knocks back the last of the golden Bolivian drops left in the sleek glass. One sleeve at a time, he rolls up his checked shirt and slides off the chair, removing his legs from the blue light. With his trousers transformed back to the regular khaki colour, he slings his jacket over his shoulder, nudging his ponytail to one side. The man and his friend wave and nod to the bartenders before strolling out – full to the brim with Bolivia. 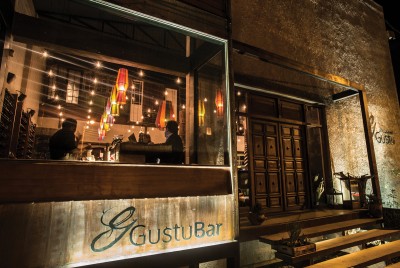