Drifting through the White City 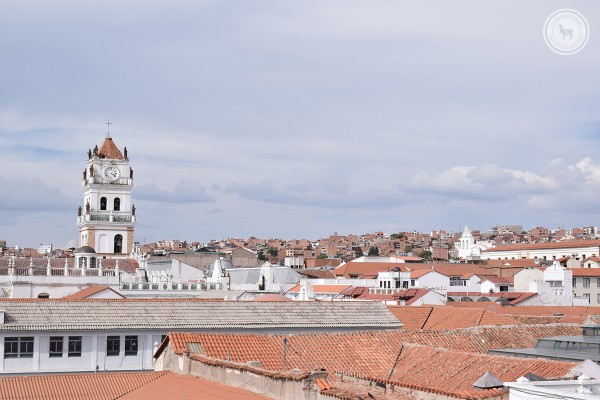 The stories that lie behind the walls of Sucre

The city is known by many names: Charcas, La Plata, Sucre. The uniform whiteness of its walls covers up its seismic historical shifts and complex identity. But the nooks and crannies of each building and street belie the city’s pallor and reveals the colourful personality of Bolivia’s White City.

It’s 9 am in Bolivia’s most beautiful and iconic square, Plaza 25 de Mayo. The city centre is slowly waking up. Sucrenses sit peacefully, reading newspapers among palm trees, flowers, and the towering statue of the city’s eponymous hero, Antonio José de Sucre. The morning sun shines upon the stunning white façades that frame the square. Tranquillity and fierce Bolivian pride fill the air in equal measure at the heart of the constitutional capital of Bolivia.

It was here that the first cries of freedom where proclaimed on the 25th of May, 1809. To my right is the monument of that proclamation, the most historically significant building in Bolivia, the House of Freedom. Walking through the door, I immediately find myself in an open courtyard. To my left, I’m greeted by the recently erected statue of Apiaguaiki Tumpa, the legendary Guaraní cacique who fought for his people’s liberty in the late 19th century.

In each room, a pivotal period of Bolivian history reveals itself. The highlight is undoubtedly the Hall of Independence: a huge open space, filled with silence, ornate decoration, momentous artefacts and portraits of Bolivia’s national heroes, that feels almost sacred. The feeling is, in part, due to the fact that the hall was constructed as a chapel by the Jesuits in 1621. Although the Jesuits were exiled from the country in the 18th century, the fine Mudéjar coffered ceiling and the stunning gold-leaf altar are a welcome reminder of their lasting imprint.

The room’s air of sanctity owes more, however, to the crucial events that took place here. It was here that the Act of Independence from Alto Peru was signed on the 6th August, 1825. The historical document remains the centrepiece of the hall, framed, mounted, and overlooked by a portrait of Simón Bolivar. In this room, Bolívar drafted the first constitution of Bolivia, awarded the presidency of the Republic to Antonio José de Sucre, and declared the newly named city the constitutional capital of the country.

Leaving the House of Freedom, the imperious Baroque façade of the Chuquisaca Governorship Palace and the domineering bell-tower of the Renaissance cathedral stand side by side as monuments from two distinct periods of Sucre’s history. With the motto “La Unidad es Fuerza” (Unity is Strength) embossed beneath its central arch, the former Presidential Palace proudly amplifies the republican spirit of the House of Freedom. The Cathedral’s bell tower reaches high into Sucre’s ever-blue sky and looks out at the thirty-five churches scattered around the white cityscape, an indelible landmark that points to a pre-Republican past.

In this city, white churches have sprouted everywhere. The first of these, the Iglesia de San Francisco, is just one block from the main square. An in-depth tour takes me through the delicate history of the building, which served as the primary living quarters of Villa de la Plata after its foundation in 1538. On the rooftop stands the Liberty Bell, which tolled to signal the first cries of freedom in 1809. Every 25th of May, the President of Bolivia returns to this church to ring the bell in commemoration of the nation’s independence.

It is 1 pm: lunchtime. Next to San Francisco, rather conveniently, is the Central Market. Wading my way through a sea of fruit stalls, I eventually arrive in the maze of the market’s main building. After stumbling around for longer than I care to admit, I discover ‘7 Lunares’, which I’m told prepares the best the chorizos in the world. Not a choripan, they tell me, but a chorizo chuquisaqueño. A double-chorizo sandwich sets me back 13 bolivianos. Was it the best in the world? Maybe.

Appetite satisfied, I make my way back to the main square via the Museum of National Ethnography and Folklore (MUSEF), housed in an impressive colonial building that used to be the National Bank of Bolivia. With no entry fee, it’s a great place to learn about the history and customs of Bolivia’s ethnic groups. Among its permanent exhibitions is the visually stunning mask museum on the first floor, showcasing the extravagant and colourful masks used in festivities by various indigenous groups.

The two most famous chocolate shops in Sucre are a short walk from the museum. Since Sucre is the chocolate capital of Bolivia, any chocolate lover needs to visit at least one of the two. Some will vouch for ‘Chocolates Para Ti’’ and some for ‘Taboada’. Both can be found on the corner of Plaza 25 de Mayo where Arenales and Arce meet. In order to join the debate, I’ll say that my hot chocolate from ‘Chocolates Para Ti’ was fabulous, an ideal mid-afternoon treat to keep me going through the day.

Pausing to look back at the white walls and terracotta roofs of the busy centre, I climb my way up to La Recoleta, zig-zagging from Calle Calvo to the charming and still streets of Grau and Dalence. As I approach the mirador, the streets become more narrow and quiet, and their names get weirder: ‘Black Cat Street’, ‘Grey Cat Street’, ‘White Cat Street’. Untouched by the hints of modernity that brush the edges of central Sucre, this is a strange and eerie area to walk through, filled with history and superstition. During the Chaco War, part of the local population was widowed, which lead to a boom in the numbers of our small feline friends. It is said that a dark and seductive widow roams these streets at night, calling drunkards in by name and making them disappear mysteriously.

The Cathedral’s bell-tower reaches high into Sucre’s ever-blue sky and looks out at the thirty-five churches scattered around the white cityscape.

It is 5 o’clock when I arrive at Plaza Anzures, and it becomes clear why the Franciscan order chose to build a monastery there as a retirement home for elderly monks. The church sits peacefully in the folds of Cerro Churuquella, looking upon the open ochre space of the plaza, where school children gather in the late afternoon. I take a seat at Cafe Mirador, barely tucked beneath the arches of the lookout, and sip on a glass of red wine as the sun slowly sets on a sea of white and terracotta.