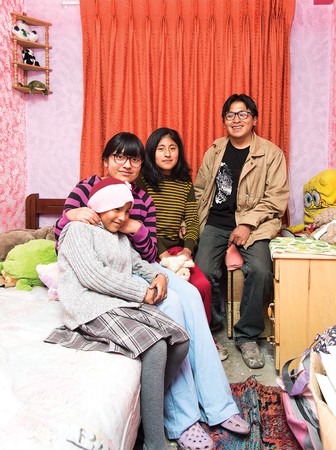 One man’s life and the dreams of his daughters

“I know it sounds funny, but I want to be a clown!” says Rina, laughing, wearing a half-guilty, half-thrilled grin. Then there is a pause. Rina considers another option: “I would also like to stay in La Paz and go to university.” She is fourteen, she is ambitious, and she faces a common childhood dilemma. Should she pursue an instinctive passion or chase a more realistic and secure desire? Nearly every child is caught between the two--no matter where they are from. Whether you’re from the small, countryside village of Stoke-Row in England (like myself) or from the urban sprawl that is La Paz, there is little difference in sentiment towards childhood experiences, dreams and ambitions.

Rina’s father, Wilmer Machada, has two other daughters: Maya,13,and Suyana,7,all of whom inherited Wilmer's engaging smile. He grew up in a town on the edge of La Paz called “Vino Tinto” or “Red Wine,” which ironically had no drinking water readily available. As a child, Wilmer had to fetch the water from the public well. His childhood recollections are of the 1980´s and 90´s, when he was living in a tight knit community without TV and where children were left to play on their own in the street and amuse themselves. "You could say that my parents were irresponsible for leaving me out on the street,” he says, “but also there was simply more trust in others back then."

Things have certainly changed for Wilmer. He lived most his life in Vino Tinto, but now calls Plaza Murillo home. In the city, Wilmer only knows a handful of his neighbours and has noticed that, unlike in his hometown, people simply go about living their own lives. For his children there is less street play and more structure. All three enjoy going to school, learning English and spending time together at home. They are more familiar with technology than Wilmer was. Rina has Facebook, Maya enjoys watching TV and Suyana plays games on the computer. Despite these differences across generations, however, Wilmer’s childhood dreams were not far from those of his daughters.

Today, Wilmer is a logistics coordinator and writer with Bolivian Express, but years ago his dreams used to take him far away from La Paz. "As a result of the era I was born in,” he says, “I think I wanted to be an astronaut--there was a lot of Star Wars at the time." His daughters laugh when he says this, either at the thought of Wilmer in a spacesuit or at the image of him charging about with a lightsaber--or both. Even though his family didn't have much money, Wilmer still dreamt of journeys into space or of taking to the field as a Bolivian football star.

Since Wilmer grew up in an impoverished rural town, I assumed he would have been forced to take on grown-up responsibilities and face circumstances that would limit his childhood wishes. This, of course, was not true. In fact, the nature of Wilmer’s childhood dreams differ very little from mine - dreams I had while living a comfortable life in rural England. I too had fantasious ideas, such as sailing the seas as an eye-patched pirate, win the world-wrestling championship with my very own signature move and perform a guitar solo in front of a live audience. All of which seem unlikely now.

k. There is a more realistic edge to their intentions. “I want to study architecture somewhere in the city,” Maya says, laying out her plans for the future. Like her older sister Rina, Maya wants to stay in La Paz and go to university. That sort of dream was not available to their father. As a child, Wilmer never thought of higher education, even though he has been studying sociology at university for six years now after he “began to want to know more things, learn and explore.”

Both Maya and Rina see their father as an idol. They are grateful for his hard work and seem to acknowledge that they’ve had a better start in life that he did. Even the youngest daughter, Suyana, when asked who her idol is looks over to Wilmer. There is a strong bond within the family as all three daughters also cite their grandmother as an idol. “Our grandmother is hardworking,” Maya explains, “she taught us to cook and she raised us.” In an age of K-Pop celebrities and second-rate movie stars, Maya’s answer was refreshing. For Wilmer, the silky feet of Diego Maradona and the superhuman strength of “He-Man” were the things he looked up to.

Wilmer is very clear about his daughters’ dreams and ambitions. He recognises that his children have more opportunities than he did and that they should make the most of them. But Wilmer would still like his children to pursue the lives that they want and not feel pressured towards one particular direction. “Many people in Bolivia are born into certains conditions, with their future already decided for them,” he says, “ but gradually this can be changed, even though the change will not be quick. It might take one or two generations, but the moment will arrive.”