DO NOT PASS GO - Do not collect two hundred bolivianos 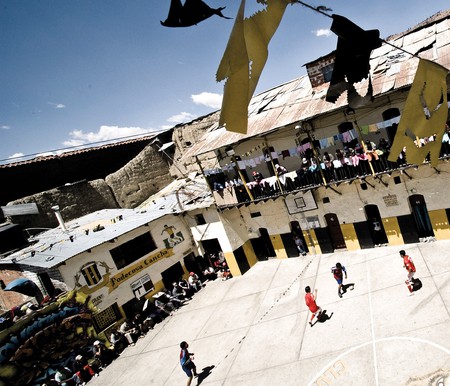 Describing all this now makes it sound like a game of Monopoly. And for people who had money, it almost was. . . . But in reality it wasn't a game; this was real money, and real people's lives at stake.

On the southern side of the tranquil Plaza San Pedro, a couple of blocks from La Paz’s central artery, and a stone's throw from the Sopocachi district, lies a huge concrete construction awash with uneven off-white paint. Sitting in this sunny square, I look around and see kiosks and market stalls, cholitas selling nuts and chocolates as children and adults lounge around in the sun; if it were not for a small red brick watchtower on the corner of the building and a scrum of police officers, the building would simply blend into the background of the square. But if you venture inside this brick fortress, you will find high-profile disgraced politicians, alleged terrorists, murderers, and minor thieves. This is the notorious San Pedro prison, made internationally famous by Rusty Young’s book, Marching Powder, about prison tour guide and drug trafficker Thomas McFadden’s time as an inmate. Inside, wives and children live with their convicted husbands and fathers. Behind the hype and the horror stories lie tight-knit communities and strong friendships in which a real-life game of Monopoly is part of the inmates’ everyday lives.

Getting into San Pedro as a tourist and a journalist is not an easy process. The days of guide-led tours for travellers looking for a cheap fix inside the prison are long gone. I sit on a small wooden bench clutching my permission slip and passport, watching the long line of visitors, mainly colourful smiling cholitas and young wives with babies strapped on their fronts, being searched. They carry bags of fruit, pasta and even planks of wood. All visitors are searched as soon as they walk through one of the doors past the front entrance; women through the left and men through the right. The entrance hall is intimidating. Men clutch the bars and shout, ‘¿A quien llamo?’, ‘¿Qué nombre es?’ These are the taxistas who make a living from calling for, and finding the inmate a particular visitor is looking for. As I enter with Amaru, the director of Bolivian Express, voices surge up and animated faces turn towards me. A man holds up a wooden board on which small wire motorbike sculptures are fashioned to decorate lighters—he has more sculptures than he does teeth. Around the courtyard are men selling cakes, chocolates, and beautifully sculpted wooden boats and friendship bracelets.

We ask one of the taxis to call for Castillo in Sección Pinos. Two minutes later, the man we are looking for, Luis Castillo, arrives. Dressed in a light blue Club Bolívar football shirt, tracksuit bottoms and trainers, Castillo doesn’t stand out from the group that crowds the entrance hall. His smile reaches all the way to his eyes and he doesn’t seem surprised to see us, despite the fact that we haven’t yet met nor made prior contact. Castillo leads us across the courtyard and through to the Pinos section of the prison. The prison is made up of eight sectors, of which Pinos is one of the more expensive and selective areas. It is clean and nicely decorated, with several cafés and salteña vendors. As we walk up the stairs and into the Pinos delegate’s office, I’m immediately put at ease by the green-and-white linoleum flooring, the Coca-Cola-emblemed chairs, the TV showing a Jason Statham film, a half-eaten tub of ice cream, and two pictures of the Virgin Mary on either side of the room.


YOU HAVE ROLLED THREE DOUBLES; GO DIRECTLY TO JAIL

As a pastime, many of the prisoners in San Pedro play games of chance such as loba and cacho. The stakes are small and rarely surpass five bolivianos a bet. The delegado of sección Pinos, Jorge, describes the afternoons spent playing cards as a form of therapy, of social interaction as opposed to a penchant for gambling. The social and therapeutic dynamics of the game playing, whether it be card, billiards or football, is of the highest importance. Jorge crosses his arms over his US-highschool-style sports jacket, looks me straight in the eyes and explains how it is the director of each section’s job to keep his community entertained and occupied; this is the way conflict and unrest are avoided. He says that the people here are not bad, they simply need entertainment and ways of amusing themselves. The line between prisoner and free citizen blurs inside my head as the amicable men continue to chat and answer questions, and I think how similar the needs of the prisoners here are to the needs of every human being. Simply depriving someone of their freedom does not remove their humanity.

Football is taken very seriously inside the prison. There are four tournaments held each year, and each section has three teams: an ‘honours’ team with the finest players, a ‘special’ team composed of regular players, and a veteran team (mutuales) for those who are older than 38. ‘The aim is for everyone to be able to play’, explains Castillo, who is now a member of the Pinos veteran team.

In his book Man’s Search for Meaning, Viktor Frankyl consulted psychiatrists in prisoner-of-war camps, who said that ‘only those who were oriented toward the future, toward a goal in the future, toward a meaning to fulfil in the future, were likely to survive’. The idea of sport and game-playing as a form of therapy is visible everywhere you look in San Pedro prison. It is an important part of these men’s lives, and the responsibility and organisation that is left up to them allows them thrive and have a more fulfilling existence in the prison.

It’s a controlled state of anarchy in the prison. From the pitch rental for football practice (five to seven bolivianos an hour) to the purchase uniforms for the first team, social activity breeds companionship and personal improvement. Castillo recounts how he has seen many good players leave the prison with more passion and skill about their game than when they entered. Star players are even transferred between teams, although this means that an inmate has to sell his cell (everything, including housing, is for sale in San Pedro) and move to another section.

GET OUT OF JAIL FREE CARD
The games of San Pedro are not without their own bargains and deals. Certificates that state that two days of work or study have been undertaken reduce an inmate's sentence by one day. These get out of jail cards are not so much free or organised by the penitentiary system; they are signed and sent off for approval by the delegates of each section. Jorge explains how the close-knit nature of each community breeds personal responsibility and its own form of justice. ‘Everyone knows everyone else and their families. We are all friends here.’ He says that the delegates’ and the public's opinion of an inmate can be as important as the ruling of a judge with regards to early releases.

With the property cards that are given to an inmate once he purchases a cell —which can be mortgaged when an inmate falls upon hard times— this game of Monopoly is little different from the board game, or the game of life that we are all playing where money is power. The phrase ‘money is everything’ keeps emerging from everyone’s lips, from the Italian anthropologist Francesca Cerbini, who authored a study of San Pedro prison called La Casa de Jabón, to the prison psychologist, Magali Quispe Yujia, and even the delegate of the Pinos section, Jorge.

Money is needed for everything: to advance your trial, to buy equipment to further your profession, as well as to pay for your living expenses, from accommodation to food. To me, the prison seems like a collection of small societies. Jorge’s explanation of the internal rules, maintenance and management appears to be a working example of anarchism. The prison does not need a centralised control system because the prisoners fulfil that role themselves.

As we leave, we hug Luis and Jorge, promising to visit them soon and to hopefully watch a football match in action. On the way out, Amaru comments on Luis’s Club Bolívar T-shirt. Luis shrugs and admits that he’s actually a fan of The Strongest, La Paz’s other big league team. ‘I’m only wearing it because someone gave it to me’, he explains. We pass a child dressed in school uniform on the stairs and another toddler playing around on a toy bike as we return to the entrance hall. All my initial fear has vanished. In fact, I’ve felt more endangered in some nightclubs in London. The unease and fear comes from us, the people from the outside. The vast majority of the prisoners in San Pedro are simply trying to play at living, just like the rest of us.