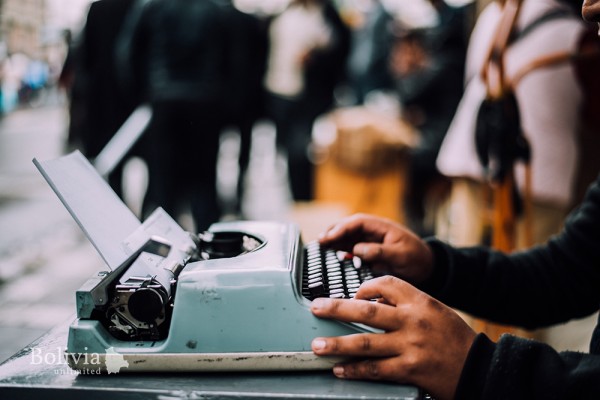 In Bolivia, where bureaucracy is almost as prevalent as it is in the preceding paragraph, such a process has begun. But such is the endemic and anachronistic nature of Bolivian bureaucracy, that there appears to be the possibility of genuine and significant change.

The arduous and lengthy task of modernising the Bolivian state is being undertaken by AGETIC (Agencia de Gobierno Electrónico y Tecnologías de Información y Comunicación) – a government department created in September 2015 for the specific purpose of debureaucratization. Nicolás Laguna Quiroga, the director of the agency, is clear and frank about the reality of Bolivia’s superfluity and inefficiency, as well as the aims of AGETIC.

‘It’s true the state is stuck in practices from 20, 40, sometimes a 100 years ago,’ he explains. ‘From now on it is a process of penetration, change and transformation…We are trying to transform the technological reality and logic of the state.’

Since its inception, an open data system, a centre for security, and over 20 new information systems for various institutions to work with have been developed, to replace the considerably smaller 15-staff ADSIB (Agencia para el Desarrollo de la Sociedad de la Información), setting the foundations for what the agency terms: ‘El Gobierno Electrónico Soberano.’

As Laguna points out, AGETIC, being a part of the Ministerio de la Presidencia, now has the institutional and financial support for significant change; a type of change, argues Laguna, that comes from the people of Bolivia.

Although still a nascent organisation, there has been enough progress with AGETIC  to vindicate Laguna’s optimism. Since it became operative in January 2016, a platform for paying online has been developed along with an identification system for people to have the same ID and password for all state-related issues – tools intended to facilitate easier interaction between the people and public services.

‘[AGETIC] comes from the necessity of the state to adapt to the changes in society…67% of Bolivians are internauts. People want results,’ Laguna explains.

However, although methods of communication and social interaction have fundamentally changed for many Bolivians in recent years it remains to be seen whether this will translate into an overhaul of economic and political practices. According to government figures, though 83% of Bolivian internauts use the Internet to connect with friends and family, only 4% of them shop online.

This disparity in the uses of the internet certainly poses challenges to AGETIC’s aims for 2025, coinciding with the bicentenary of Bolivia, which even Laguna admits are ‘ambitious.’

‘Everything will be online,’ he says. ‘70% of Bolivians will interact with the government online and the proportion of Bolivians using online payments will rise from 10 to 70%. There too will be a significant rise in electronic commerce which will help economic growth.’

These targets are made yet harder by the existence of several bureaucratic obstacles – embedded in tradition and routine of the public service – that remain stubborn and rigid, particularly regarding public organs independent of the executive, such as the judiciary. Thus, although various software and technological instruments have been developed, their implementation has in some cases stalled.

‘The public authorities are very closed, they only think about themselves,’ Laguna continues. ‘They manage their own administration, their own procedures and they don't care about the citizen.’

This sentiment encapsulates the outlook of AGETIC. Not only is the deconstruction of bureaucracy necessary in the increasingly globalised and tech-orientated world in which we live, but it is also a process rooted in the tumult of Bolivia’s history.

As Laguna explains, ‘[bureaucracy in Bolivia] is a legacy from colonial times, a bureaucratic apparatus that the republic inherited, a nucleus of Spaniards and criollos that ignored the indigenous world.’ But for him, ‘the priority is the citizen.’

This too is reflected in the approach of AGETIC. ‘Everything we create is turned into free software with the purpose of public use,’ Laguna says. ‘For us this is more than just a project. What we want is to serve the people…We want to learn and do it ourselves.’

Thus, the process of debureaucratization in Bolivia, although long and inevitably attritional, is underway. Whether AGETIC can retain its focus and coherence of approach in the face of both tradition and systematic stubbornness remains to be seen. Laguna, however, is positive that the change will come: ‘The future is here.’

Amid the bustle and busy bureaucracy of La Paz’s administrative centre, tucked away among small market stalls and purposeless tourists, the typeadores sit at their antiquated typewriters, typing up impuestos and other official documentation. Their clients are pedestrians, their offices are the streets.

Showcasing his new typewriter, engraved ‘Made in the Democratic Republic of Germany’, Benancio Maica, 60, explained the role of the typeadores:

‘What we mostly do is fill forms, tax forms, everything related to taxes.’

Despite the mundanity of their work, the typeadores, who have been working in the streets of La Paz since 1986, certainly add a quirkiness to Bolivian bureaucracy, working all year through ‘the cold, the wind and the rain.’

When asked if he believed the typeadores were under threat from technological advancement Maica was both confident and resolute:

‘Typewriters are easier and more practical than computers – we can take them anywhere. Our clients know us…The typewriters will live on.’