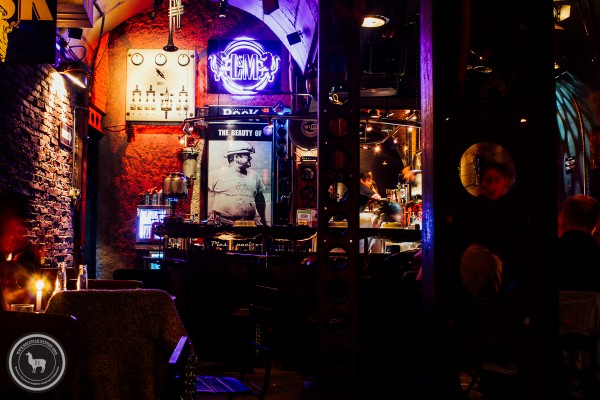 Going Out and Reviews

More Than Just a Space of Waste

Upon approaching the late-night bar Diesel Nacional, located in the centre of La Paz’s Sopocachi neighbourhood, you would be forgiven for thinking you’d mistaken a popular twilight retreat for the entrance to a dystopian abandoned factory. The sharp spikes of the gate thrust imposingly into the barbed night air, whilst disused machinery parts lie strewn across the gravel, either side of the ruptured train tracks that pave the way towards revolving boxcar doors. Once inside, customers are ensconced in a windowless metallic semi-cylinder, illuminated by amber coals burning invitingly in the cauldron-turned-woodburner.

Through his use of predominantly recycled materials, owner and designer Rodrigo Quiroga reservices the term ‘industrial chic’, simultaneously creating a popular social space, a work of art and an emblem of sustainable interior design. Diesel’s inky steel walls give the illusion of having descended from Avenida 20 de Octubre into the kernel of an industrial bunker, an impression augmented by the internal combustion engine of a 1948 Curtiss aeroplane hanging as a sculpture near the entrance, accompanied by a rusty canister of glue and 19th-century ice-cutting machine.

Utility meets a harsh beauty in Diesel’s aesthetic, offering a dining and drinking experience like none other in La Paz. Take a seat at the bar and you’ll find yourself perched on what were once the seats of tractors, with engine cogs composing the stool’s root. Glance up and you’ll see fragmented chains, trenchant meat hooks and idle trumpets dangling from the ceiling.

The incandescent buzz generated by the murmur of fellow drinkers and a synthesis of American soul, Latin American gems and mellow rock music provide a prime environment to taste Diesel’s excellent pub food and dare to try its explosive cocktail menu and notable wine list. The bar is not only host to innovative architecture but also to the best mojito in town (democratically elected by the Bolivian Express team, after extensive field research), whilst the menu dubiously includes a cocktail with a description represented by the English-language phrase, ‘Bolivian politician Son of a Bitch’s typical corrupt dirty business’: a fusion of whisky, bitters and cloves (cost: 40 bolivianos) – it’s smoother than it sounds.

The food menu at Diesel is surprisingly diverse and piquant considering that the establishment's allure sparks from its drinks and design. Here, food prices range from 25 bolivianos for gently cooked papas to 50-70 bolivianos for seafood dishes, and an Argentine-style barbecue platter for 100 bolivianos.

Although Diesel approaches the pricier corners of La Paz’s nighttime haunts, it’s certainly worth a little extra to spend an evening immersed in its intriguing metallic charm. Amongst the solid steel columns there flows an atmosphere not of decay and discomfort but of progression and motion. The ruptured train track outside the front entrance continues along the ceiling of the back rooms whilst stainless steel from commercial aeroplanes adorns the toilets. These abandoned vehicle parts are recycled and repurposed, symbolising a forward movement in interior design.