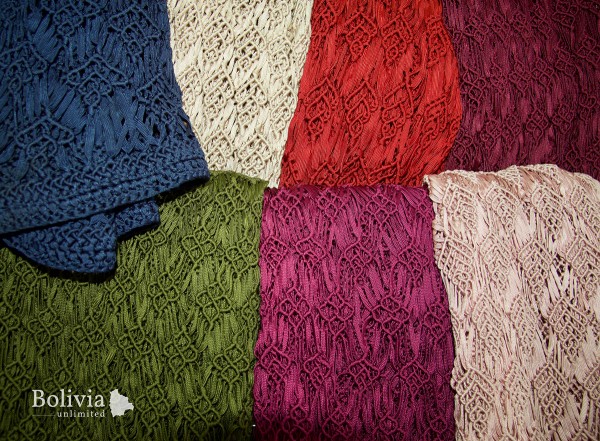 Stitching the challenging road toward the rights of transgender Bolivians

In the hustle and bustle of the market in La Paz that leads to the city’s cemetery, it’s hard to miss Diana Málaga’s storefront. Bursting at the seams with vibrant designs inspired by the traditional chola dress, it’s difficult not to be drawn in by the staggering array of meticulously-sewn outfits on display.

Eager customers who step into the store, excited to get their hands on one of Málaga’s playful and creative spins on the traditional Bolivian dress, will find the store owner adorning sequins and beads to handmade garments ready to cater to the indigenous community of La Paz. Málaga is not only a successful designer and businesswoman with a degree in Social Communication, she is also the first transgender woman to identify as a chola.

Fashion has been more than a means for Málaga to express her passion for creative design. First and foremost, it was a means of survival, a way to pay the bills. Málaga turned to a career in fashion due to the intense gender discrimination in the workplace in Bolivia, which made it almost impossible for her to secure a well-paid job in the country ‘I have been unemployed,’ Málaga explained, highlighting the vicious circle of poverty that the transgender community faces in Bolivia due to a lack of education.

Málaga’s love for design has opened doors for her to speak to the press about her desire to eradicate public ignorance towards sexuality. As a university student at UMSA in 2001, she was forced to repeat a year of her studies after she legally changed her name. What should have been a simple administrative change, ‘took a year to be legally accepted,’ she says. ‘My fight has been hard, but, yes, I have won.’

Throughout her transition, Málaga has been unjustly criticised by onlookers who, blinded by ignorance about sexuality, undermine her claim: ‘I am a woman, I am going to have children.’ ‘Being a woman is not about having a vagina,’ Málaga explains. ‘Gender comes from your own self-awareness, your own brain.’ Bombarded with negative comments from relatives and strangers alike, Málaga never gave up the fight to be her real self, Diana María Málaga, ‘A transgender woman first and a chola second.’

Málaga drew public attention during her transformation as ‘the first transexual to identify as a chola.’ A chola (also known as a ‘cholita’) is usually associated with a traditional dress and a unique silhouette. The outfit typically consists of a small bowler hat, long plaits with tassled cords tied in a knot at the ends, a shawl and a large, ankle-length skirt that maximises the size of the hips and creates the desired silhouette. Being a chola, is more than just dressing the part. It is an integral part of a woman’s identity. It is away of life. As Málaga says, ‘A folklore dancer is not a chola.’ For these dancers, the traditional dress is part of a persona they recreate to give life to Bolivian cultural heritage.

A woman usually identifies as a chola by heritage. It is an identity that is passed down through the maternal bloodline. Málaga’s mother did not wear traditional dress like the women in the family who had come before her, but when her grandmother, a chola, invited Málaga to a party where she was to wear traditional dress, Málaga became inspired by this indigenous Bolivian look.

The decision to be a chola was a fashion choice, but ‘it started as a costume,’ Málaga points out. As a 1.78m tall transgender woman, she quickly became aware that it would be a real challenge to find a cholita ensemble for a woman of her stature. Before long, she found herself behind a sewing machine manufacturing her first pollera, a sombrero, a shawl and a complete cholita outfit. This was the start of Málaga’s journey of transformation as a chola. What started as a fashion choice quickly evolved into a core part of her identity as a Bolivian woman.

So what does it mean to be a cholita today in Bolivia? Following decades of racial discrimination, the word ‘chola’ has taken on pejorative connotations that echo Bolivia’s history of oppression towards indigenous communities. As a result, the term ‘cholita’ emerged, using the suffix ‘-ita’ in Spanish as a diminutive. Although ‘cholita’ is often considered a term of endearment for indigenous women, Málaga doesn’t see it this way. ‘I am not a cholita because it is a diminutive term, on a small scale,’ she says. Even though, the word ‘chola’ is largely considered a discriminatory term, Málaga has ‘worked hard to shape this word.’ Like her tireless efforts to protect the rights of the transgender community, she has also struggled for a future without prejudice towards indigenous people in Bolivia.

‘I want to make sure that nothing is impossible for transgender women.’

Today, Málaga has a home and a husband to whom she has been married for seven years. She hosts a radio programme, has been interviewed on TV and hosts a television show on the channel ‘11 Red Uno de Bolivia.’ She uses her status within the LGBT community to provoke crucial discussions about prominent social issues in Bolivia, including domestic violence and human rights. She is a true icon in the LGBT community of La Paz, with a website that attracts visitors who eager to learn more about her journey as well as opponents to her cause.

So what’s next for Diana Málaga? As a woman with aspirations of securing greater rights for the transgender community in Bolivia, a move towards the world of politics could be in the cards. She hopes to effect change for the rest of her community by working tirelessly for gender rights in Bolivia and by fighting for greater public acceptance of all genders rather than settling for widespread gender tolerance. One of her main objectives for the future is to help redefine gender, not as a set of physical characteristics, but as an emotional and mental awareness of who you really are.

‘Gender comes from your own self-awareness, your own brain.’