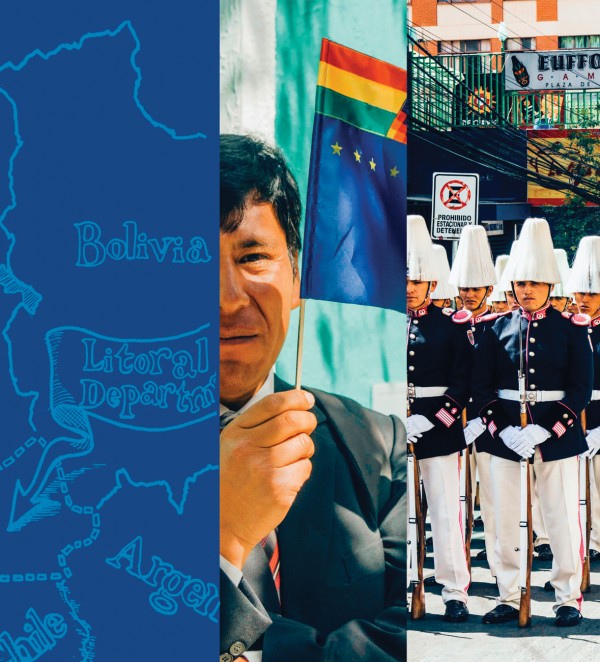 In the days leading up to Día del Mar, Plaza Abaroa is a tranquil place. All that can be heard are the sounds of gardeners peacefully watering the surrounding grass. One man sweeps the stone pathways that transect the plaza, while others in swanky suits quietly eat lunch on nearby benches. Yet, the bitter smell of fresh black paint stands out in the plaza, and forces Sopocachi residents to stop in their tracks. The paint outlines where Bolivian dignitaries and members of the National Congress will stand in a few days, during the March 23rd commemoration.

The War of the Pacific, fought between Chile, Peru and Bolivia, began as a border dispute when Bolivia imposed a 10-cent tax on the potassium nitrate produced by Chile in the Litoral province. In the first battle, fought in Calama in 1879, 500 Chilean soldiers faced 100 Bolivian men, including Plaza Abaroa’s namesake, Eduardo Avaroa, who owned property in the area. According to folklore, when Chilean soldiers asked Avaroa to surrender, in a moment of pure valour, the doughty landowner yelled back, ‘¿Rendirme yo? ¡Que se rinda su abuela!’ (Surrender me? Your grandmother should surrender!) Since his death, he lives on as a national hero in major plazas across Bolivia and in the Reserva Nacional de Fauna Andina Eduardo Avaroa. Even so, Plaza Abaroa’s official name continues to be misspelled due to the linguistic similarity between ‘B’s’ and ‘V’s’ in spoken Spanish.

The War of the Pacific ended in 1883, but Eduardo Avaroa’s name still symbolises hope in modern day Bolivia. The country officially lost its Litoral province to Chile at the end of the war, but to this day it insists on regaining its sovereign access to the sea. Under Evo Morales’ leadership, Bolivia has taken actions to modify the 1904 Treaty of Peace & Friendship. In 2013, it filed an official plea to sue Chile at the International Court of Justice in The Hague. If the court sides with Bolivia, the landlocked country could gain back a portion of the 400 km coastline it lost 112 years ago.

On Día del Mar, the plaza could not differ more from the serene days leading up to it. In the morning, jets dart above the now-barricaded plaza. The crowds of paceños that fill the sidewalks can still see the bronze statue of Avaroa in the centre of the plaza. Floral offerings in the country’s vibrant yellow, green and red, surround Eduardo Avaroa. The many blue flowers encompassing the statue remind onlookers of the true purpose of today’s festivities. Local school marching bands, politicians, the Ministry of Defence, the army, and of course, Bolivia’s navy, occupy the streets themselves. The navy’s plain white suits greatly contrast the more whimsical and colourful costumes of the processions. Bolivia maintains a navy to surveil Lago Titicaca and the country’s rivers, as well as in the hope of one day regaining its coastline.

Evo Morales’ stern voice rumbles over the loudspeakers as he shares his hopes of ‘frank and sincere dialogue with Chile.’ His sentiments are emotional but optimistic, which reflect the country’s belief that one battle has already been won. In September 2015, the International Court of Justice rejected Chile’s claim that the court had no jurisdiction in the case. Chile now has until July 25th to respond to Bolivia’s case, while Bolivia has spent the past week analysing and preparing for different arguments Chile may make.

After a midday siesta, the streets in front of Plaza Abaroa are filled once more with parades. The marching drums seem to vibrate local buildings even more than the morning’s jets. Chants and songs, in combination with the drums, fill the air and drown out the Western music of Alexander Coffee across the street, from where local barista Mirea Sandoval Rivera has watched Día del Mar each year behind the counter. ‘In the heart of all Bolivians,’ she says, when asked if Bolivia will ever gain access to the sea, ‘we will always defend the story of Avaroa.’

The end of the day’s commemoration is eerie. After hours of music, the drums come to an unnerving halt. No soldier or onlooker chants or even mumbles a word. There is a chilling atmosphere and no one seems to know what is going to happen next, like in the uncertain months to come for Bolivia in the Hague. Amidst a few more shouts, the soldiers precede onward, carrying the flag flown in 1879 away from Plaza Abaroa. All that can be heard is the dismantling of stages, while the paceños are left wondering if their country will always remain landlocked.