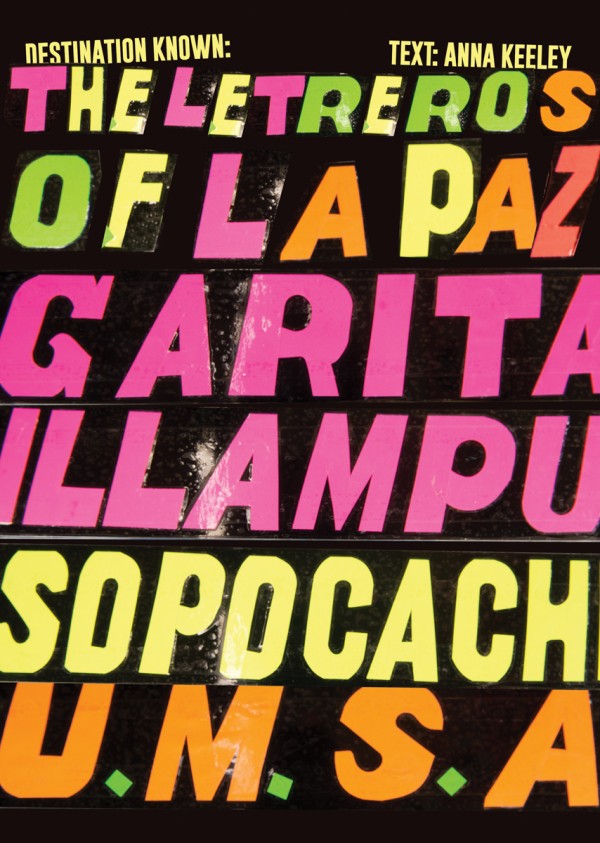 In the windscreen of every minibus and trufi in La Paz sits a handful of letreros indicating geographical locations; simply catch sight of your destination, walk out into the road and climb aboard. These colourful letters mounted on strips of black cards are some of La Paz’s most striking visual images. Amidst the sprawl of congested avenues at rush hour, blurs of pink, green and orange represent the energy and disorder of the city’s public transit system.

As these handmade signs are universal across hundreds of vehicles in La Paz, surely it would be easy to find the craftsmen behind such labels? Wrong.

After travelling all over the city with inconclusive leads from taxistas, bus drivers and even a transport union leader, it became clear that the letristas of La Paz were few and far between. However, internet cafes, stationary shops and street vendors alike advertise with the same visual aids. Despite the high demand for letreros in La Paz, their production is managed by a small number of individuals, an imbalance that didn’t make sense.

Among a line of kiosks on Avenida Perú in the Zona Pura Pura, I eventually found Raul Valero Angles, nestled behind a display of his colourful letreros. He was cutting letters out of paper at breakneck speed while assuring a cholita that her order of labels advertising pie de manzana were spelt correctly – a Spanish reading could be ‘apple feet’ as opposed to the desired ‘apple pie.’

Raul explained the scarcity of letristas in La Paz: ‘Here in Bolivia people are used to buying and selling, not producing. We produce right from the start – buying, painting and cutting material. That’s why people don’t want to get involved.’ He added lightheartedly, ‘We have to have a great deal of patience. It’s not easy making a letrero.’

Another factor making the letristas a rare sight may be the growing trend amongst businesses for la gigantografía, digitally designed signs that favour kitsch typefaces over the artisanal work of Raul and other letristas. Raul said, ‘The problem with las gigantografías is that they don’t stand out. That’s why customers come to us, because we use phosphorescent colours that people remember.’

Marcos Huanca is one of the city’s older letristas, his workshop located in the northern suburb of Villa Fátima. He began producing letreros 30 years ago, after growing up with a father who painted basketball courts. Looking out onto the Plaza del Maestro from a kiosk with just enough space for himself and a variety of coloured cards, Marcos has witnessed the evolution of La Paz’s transport system.

He remarked, ‘There are more buses than before; anyone can buy a van, sign up to a union and suddenly they’re a bus driver.’ Like Raul, his main source of business is making letreros for new drivers.

Marcos admitted that he no longer enjoys his business. In four years’ time, he hopes to move to the altiplano to grow rice and coca, for as he says, ‘Life is more peaceful there.’ For Raul, however, changing career paths is not an option. ‘You feel a special satisfaction when you spot one of your letreros, most of all when you see it on television,’ he said. ‘To see your own work of art, something that you have created – it’s a joy.’

If La Paz eventually moves away from collective minibuses, following in the steps of the Puma Katari bus and the teleférico, it will satisfy most paceños’ wish for a better transport system. At present, however, a La Paz without letreros and their distinctive colours is almost impossible to imagine. 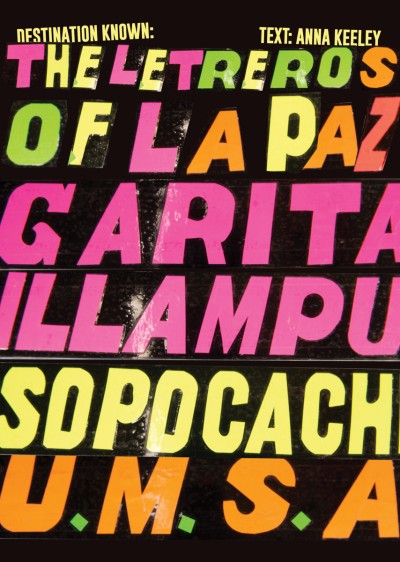