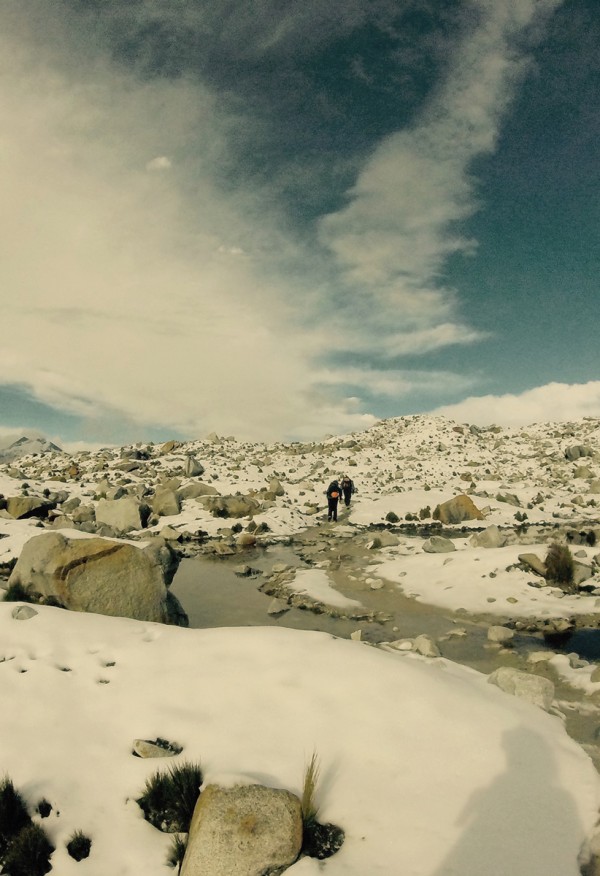 From the lights of El Alto city at night—a starry sky that, to a London-born city girl, looks like a theatre backdrop—to the sun rising above the clouds, the views climbing Huayna Potosí can only be described as surreal. You’d be forgiven for forgetting that you are only a 45-minute drive away from La Paz. Although civilisation is a mere stone’s throw away, here, at over 6,000 metres above sea level, you are cut off from the world.

As we ascended from 5,000 metres to the summit in the middle of the night, the only sound heard for miles was the crunching of snow underfoot and the rhythmic breathing of our small group of mountaineers. However, no matter how peaceful and serene it may have seemed at the time, what I realised more than anything on this expedition is just how vulnerable you are in the mountains.

We were halfway up climbing the steep final ascent when I began to feel the snow slide away from underneath me, and every step I took felt less and less secure. The sun had started to rise and the snow had started to melt, sending small snowballs tumbling down the steep cliff face. About 80 metres from the summit, we decided as a group to turn around and not attempt the summit, as the avalanche risk was too high.

As we began our descent, Eduardo, our guide, explained the dangers of mountaineering. He once ran from the base camp, at 4,700 metres, to the summit, at 6,088 metres, in an hour and a half, to rescue his colleague and a fellow climber who were trapped in an avalanche—a journey that would take the average person about six hours. It was on that same slope that we made the decision to turn around. Avalanches occur often there, given its steep, smooth surface and the buildup of layers of old and new snow.

When he told me this story, I realised two things: just how much experience and local knowledge is needed to be a mountain guide, and how isolated and dangerous the mountains can be, especially here in Bolivia. The route is inaccessible by car and, unlike Europe, there are no emergency services, except rescuers on foot. This makes one realise that, as Eduardo explained, ‘No one is safe in the mountains’.