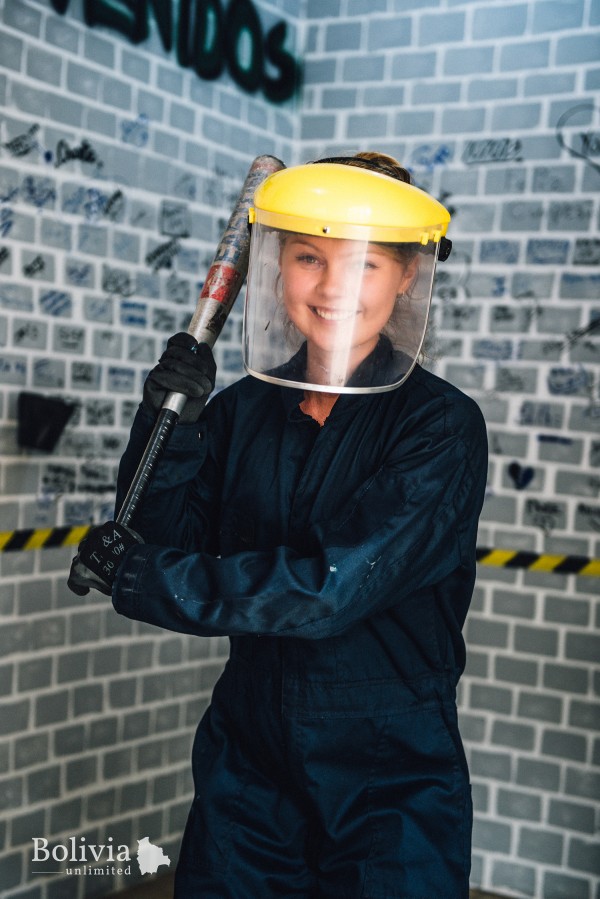 Your heart beats faster and faster in your chest, your palms become clammy, your head starts to pound. Stress is an illness that affects all of us at one time or another, especially here in La Paz, ‘the most stressed-out city in Bolivia’ according to Jaime Fernández Hervas. Be it the result of a demanding workplace environment or an overwhelming personal life, stress can be extremely damaging if it is not dealt with effectively. That’s why Carla Calvimontes Sánchez and Jaime Fernández Hervas decided to open their crash therapy centre in La Paz, called ‘Desmadre’, meaning ‘chaos’ in Spanish. Having experienced the pressure of working in both the public and private sectors, they found the most effective method of stress-relief was through this unusual form of therapy.

Their alternative method for de-stressing is a new and increasingly popular technique that involves releasing negative emotion through the destruction of objects. You can scream, shout, graffiti walls and even smash glass bottles in this safe space, equipped with safety uniforms and health and safety precautions. Exploring your anger and anxiety in a healthy way is encouraged. ‘In your home, you can’t smash objects, you can’t scream,’ Sánchez notes. At Desmadre, however, this extreme display of emotion is not off limits.

Clients may be driven to explore crash therapy for a variety of reasons, including partners who hope to resolve a dispute, office workers who want to release pent-up frustration or even children with too much energy. ‘A mother phoned me crying,’ Sánchez recalls, ‘because her daughter was experiencing terrible bullying at school and had to leave school half way through the year because she couldn’t sleep, she couldn’t eat.’ After a session of crash therapy, she slept well for the first time in weeks.

According to Sánchez, psychological studies conducted in Spain support these results as ‘a way of easing hypertension, depression and stress’ he says. ‘De-stressing is the same as having fun’ and with crash therapy, destressing couldn’t be more exhilarating. You can even choose from ‘rock or electronic music’ to set the ambience for your ten minute stress-relief session.

At present, the only objects you can destroy at Desmadre are glass bottles, but this wasn’t always the case. According to Hervas, it’s the visual impact of smashing a glass bottle that makes this object superior in this form of stress relief . ‘We used to have glasses, glass bottles and plates,’ he says, ‘but now we only use glass bottles. All the objects destroyed during the therapy end up in a recycling centre where they are sustainably disposed of.’

In this bustling Bolivian city, ‘road blockades, marches and protests are almost a daily occurrence,’ Hervas explained. These are symptoms of a ‘stressed-out city’ in need of an effective cure. According to an article by Página Siete, ‘70 percent of Bolivians suffer from work stress.’ After its success in Spain and the United States, Hervas believes crash therapy could be the answer La Paz has been looking for.

For this reason Desmadre hopes to move to a new location in the centre of La Paz and provide therapy to city workers. Hervas believes his future clients will be able ‘to leave the office and in ten minutes be at their crash therapy session’ at the end of a stressful day at work. Although it is important not to confuse crash therapy as a replacement for traditional psychological help from a trained professional, it can definitely be a stress-relieving addition to complement psychological treatment.

The rules: you can’t bring any form of weapon into the therapy room; you can’t be under the influence of alcohol or drugs; you must wear closed toes shoes and sport their safety uniform, which includes a jumpsuit, gloves and safety visor. Apart from that, let loose!

Scrawled across the white brick wall of the reception are hundreds of signatures from clients who have already benefited from this therapeutic experience, that opened only a few months ago. One message read: ‘We are deconstructing ourselves in order to reconstruct ourselves again.’ At Desmadre, you can too begin to break down your negativity in order to construct a new stress-free life.