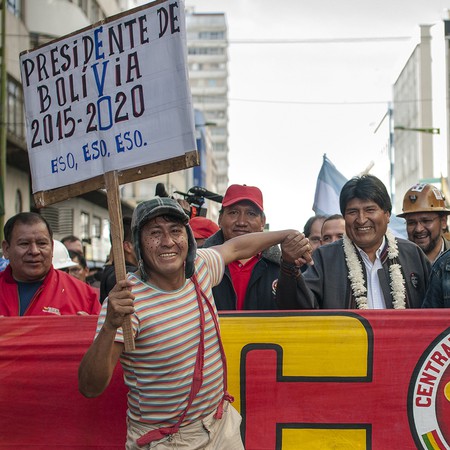 Morales goes for his third electoral campaign but is it legitimate?

How do you go about defining democracy? If you’re about to host a dinner party, look away now. Some might say it’s government by the people, a free electoral system, equality of rights, or a mish-mash of all of these things. Sitting amid the passing cries of the voceadores, who hang out the side of the minibuses here in La Paz advertising destinations, I wonder what relevance this word has in Bolivia today and whether Morales’s run for a third term in office undermines democracy in the country.

‘It’s legal but it’s not legitimate, in the sense that Morales promised he wasn’t going to do this..It’s dangerous. El caudillismo will grow even more and the problems that have already started to appear with this government will grow deeper.’ (Fernando Molina, Bolivian journalist and writer)

‘Constitutionally, this will be his first re-election, that is to say only his second mandate. When the constitution allows a President to run for election he doesn’t become President automatically. The only thing the tribunal has made possible is that the people get to decide again. Nothing more.’ (Manuel Canelas, politician for MAS, Morales’s party)

Ah, there it is, we found it. Democracy gives us the ability to discuss, debate, and dissect even one of the most controversial topics in current Bolivian politics: Morales’s desire to stay in power.

For some (or indeed many) of you, finding out that Morales is running for President again might not be alarming. Perhaps you don’t know that the Bolivian Constitution allows only one re-election per President, for a total of two consecutive terms in office. Would this be Morales’s second or third term as President? Was his first term technically a full one? These are the questions that drive the ongoing debate about democracy in Bolivia in the context of the upcoming Presidential elections.

The Plurinational Constitutional Tribunal, which adjudicates government power here in Bolivia, was the body that approved Morales’s right to run in the October elections. As long as we don’t believe that the tribunal lives in the government’s pocket--and Canelas assures that the last two judgments haven’t gone in the government’s favour--the system of checks and balances seems to have deliberated on the matter. Sure, Morales’s candidacy was not sanctioned in a national referendum (as the opposition had called for).

‘There would have been a legitimate way to run for a third term, a referendum, but he went via another route.’ (Molina)

‘A referendum is only obligatory when you are reforming the constitution. In this case a referendum was not obligatory.’ (Canelas)

Is Morales creating the atmosphere for a repeat of the “Manuel Zelaya incident”? Zelaya was a Honduran President who was deposed by a military coup after he tried to end presidential term limits so he could run again in an election.

Without getting into a ‘shoulda, woulda, coulda’ situation and end up making a political cover of Beverley Knight’s successful single, let’s discuss what Morales’s probable third term actually means to the people. After all, 8/10 Bolivians today, according to a non-governmental survey, approve of the way the country is being run and Morales is leading heavily in the polls. Do Bolivians really think that Morales running for a third mandate is a bad thing?

I spend the afternoon in Plaza San Francisco, where the mini bus lines create a La Paz/ El Alto melting pot, asking people what they think.

‘He seems to be just another corrupt politician.’ (Fernando, who preferred not to give his surname)

‘In my opinion, it’s fine for Morales to run again. If the people want him as President, why prevent him?’ (Young man who wished to remain anonymous)

Even if you concur with this sentiment in principle, surely you would agree that democracy shouldn’t be an infinitely flexible system, especially since Bolivia only returned to a democracy some thirty-two years ago. One of the ladies I spoke to in Plaza Francisco voiced this concern:

‘It’s a problem. Morales wrote the constitution with one hand and rubbed it out with his elbow at the same time.’

Moreover, according to Molina, the consequences of Morales’s third term in office could be serious:

‘It’s exactly what happened when democracy was first introduced: It can be manipulated until it loses its essence and the capacity for government to ever change.’

But what if Morales had not been allowed to run again?

‘If the President hadn’t been allowed to run again I think a lot of people would have been annoyed. We would have found ourselves in an unstable political climate.’(Canelas)

There is an element of Bolivian pragmatism in this whole debate. As you may remember, in the last issue of this magazine, we discussed what the new child labour law in the country would mean for Bolivian society. Initially, we screamed “no”, almost by instinct, against the lowering of the legal working age. But by the end of our reporting, our news team was torn between the ideals we cherish and the pragmatic concerns of average Bolivians.

Something similar is going on here. Instinctively, it would seem that Morales is bending the rules to his favour. Then again, one could ask if there is any harm in what he’s doing. Are there no alternative candidates within Morales’s party? What about outside of it?

‘Without Evo Morales MAS wouldn’t exist; the government wouldn’t exist. It would be a disaster. Everything depends on him and this is grave because it makes democracy and the whole country reliant on him.’ (Molina)

‘I don’t think there is anyone viable from another party and this is bad news for the country because it’s necessary to have opposition..It’s very difficult because of this current, exceptional political period to think that there can be other leaders of the same standard. The ideal would be to produce an alternative (candidate) from within MAS, or at least a form of collective leadership.’ (Canelas)

No matter which side of the Morales-shaped fence you stand on, there seems to be a unanimous opinion that he is not politically replaceable at this point in time. As a foreigner, I am left worrying not about the legitimacy of Morales’s likely third term in office, but about who will be on the voting card when it’s time for his fourth. Really, anything could happen.