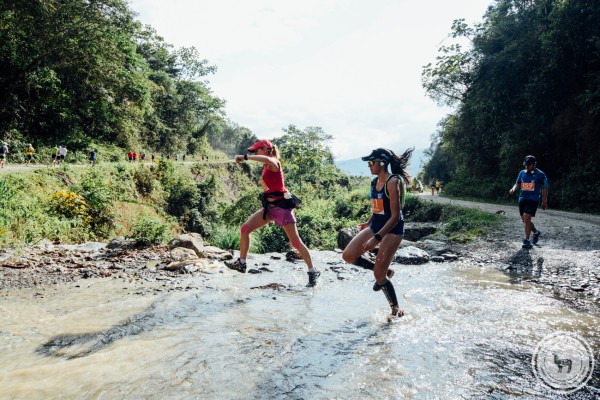 It’s not the finish line that decides the winner of this race – it’s the mountains. Every year, a pack of leading runners climbs into the sky and every year they are dragged apart by the green slopes of the Bolivian wilderness. It is less a competition and more a conquest, a battle against exhaustion, altitude and pain. ‘Your legs just can’t do it anymore,’ says Marco Chura. ‘Then you have to run with your head and your heart, because there is no strength left anymore.’ This is the Skyrace, on Bolivia’s infamous ‘Death Road’.

Marco, 22, has won the Skyrace three times, setting a new men’s record this past August. Slight and quiet, Marco’s appearance belies his accomplishments. He ran in the very first Skyrace, back in 2012, when i3 Impacto Social, a social enterprise for low-income communities, chose a uniquely challenging venue for a new race: the ‘Death Road’ in Nor Yungas. A largely single lane track, it has few guard rails as it winds around cliffs of up to 600 metres high. Over the years it has claimed thousands of lives, although the danger lies more in late-night bus journeys than in a gradual two-footed ascent. Instead, the excruciating difficulty of the Skyrace comes from the sheer height and distance demanded by this event: 28 kilometers of dirt and jungle over a climb of 1,800 meters.

The race starts in the tropical humidity of Yolosa; at 1,230m, the route ascends for 15 kilometers up the Yungas to La Etapa. Many of the runners choose to quit here, but for Marco this is the halfway point. The hardest part lies ahead, with a steep climb into the forested heights of Chuspipata. When runners collapse over the finish line, they stand a whole 3,030m above sea level.

‘You have to run with your head and your heart, because there is no strength left anymore.’

When Marco first competed in the Skyrace, he wasn’t even an adult. Remarkably, he won, and had cemented a deep love for one of the most punishing races in Bolivia. The race attracts competitors from all over the country, from La Paz to Santa Cruz. La Paz resident and active runner Fabiola Ibarnegaray said, ‘I love the trail, love the scenery, love the challenge. The Skyrace has a special place in my heart.’

Like many emerging sports, the Skyrace is caught between increasing athletic professionalism and frustrating limitations in funding. Sponsorships remain few and far between – and not just for the runners. Beatriz García, the founder and managing director of i3 Impacto Social, admits that finding committed sponsors is a challenge, although organisations like Gatorade and the Red Cross are now involved.

Ultimately though, the Skyrace exists not just for its runners but for the causes it supports. Unlike many long-distance races around La Paz, it comes with a entrance fee (420 bolivianos), in part to pay for the numerous transport and safety costs (the winners receive no remuneration). This year’s race raised funds for Metro Parada Juvenil, which provides youth centres in El Alto, and the Senda Verde Animal Refuge, which protects illegally trafficked animals.

‘The Skyrace has a special place in my heart.’

However, neither money nor social enterprise truly explain why, year after year, runners return to face down the ‘Death Road’. For Marco, it’s the struggle. The Skyrace is so difficult in his eyes that ‘everyone who reaches the finish line is a winner and a champion.’ In those awful and lonely final kilometres, he says that ‘everything comes to mind – your training, your friends and family. Even though you may be alone, you feel like someone is accompanying you and pushing you to keep going.’