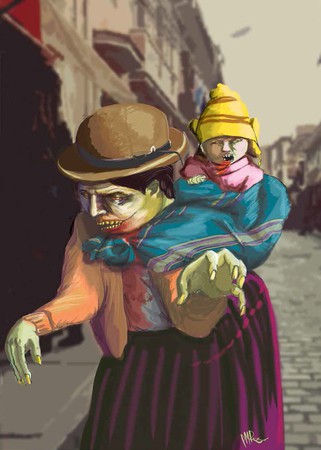 Asia Hart-Eason locks the door, grabs a blanket, and takes a tour through some of Bolivia’s best -and worst- horror films.

I'm sitting on a couch watching a woman take a hearty bite out of a man's neck. There is a splatter of blood on the floor by my feet. Luckily, there's no cause for alarm, as I am on the set of Olalla, a horror film by director-producer-actor team Jac Avila and Amy Hesketh. Avila and Hesketh, of Pachamama Films, met at a film festival in 2005 and have been collaborating ever since, producing controversial works like Barbazul and Maleficarum. In their Miraflores studio, I feel the energy, their determination to get a scene shot while the light is still ideal. This is the face of Bolivian horror.

Just to make it clear, Olalla is a vampire movie. I am told it is only the second feature length film of its genre ever to be made in Bolivia. The first one, Dead but Dreaming, was also created by the pair and released in July 2013. It is a time-hopping drama that contemplates femininity, religion, purity, sexuality, violence, and, of course, death. It also features dramatic, prominently Bolivian landscapes; areas in Potosí and around Lake Titicaca.

Interestingly enough, its soundtrack has a decidedly Old West American vibe to it, as do the scenery and costumes. This is quite baffling, considering its story jumps from 57 BC to 1800s La Paz. ‘It’s intentional’, Avila tells me, explaining he meant for it to be reminiscent of a spaghetti western.
Avila recounts his first movie experience as a child, seeing Bambi at the movies. Although this animated film intended for children may seem to be the opposite of what he produces now, he points out that on a deeper level, Bambi is terrifying—what with the guns, dead mother, and general violence.
But why do people watch horror movies at all? I ask. ‘Fear’, Jac replies blankly. While viewers are intrigued by the unknown, they still like to see what's scaring them. I then ask what attracts a Bolivian audience to horror. ‘Bolivian audience?’ The pair laugh while considering the very idea. An audience for Bolivian horror films is apparently close to nonexistent.

I couldn’t help but notice nudity features prominently in their films, almost as much as blood and guts. I ask them about any related local taboos, which I assume would exist in a predominantly Catholic country like Bolivia. Surprisingly, the duo has received more complaints about violence, particularly toward women, than the somewhat overly-generous helpings of nudity throughout their films. Avila even mentions a woman who walked out of his movie at a festival, stating that it was incredible, but too intense.

The rest of the Bolivian horror industry is dominated by short films, usually produced by university students. I watch a few, each one lasting between one and twenty minutes. Apart from one involving zombies, most use lighting, color, soundtrack, limited dialogue, and camera viewpoint to produce a unique sense of psychological fear—quite different from the gore and physical violence of Dead but Dreaming. Almost all in black and white, they evoke a common sense of isolation—the excruciatingly universal fear of being alone.

Ningún Lado by Alberto Guerra speaks directly to fear of the unknown. The plot: a man hears a couple arguing. It seems simple enough, but when he searches for them, they are nowhere to be found. Their voices escalate, and the protagonist becomes overwhelmed. The pulsating beat of the soundtrack only contributes to the feelings of stress and urgency that, by this point, the man and his audience share. There is no peace and no escape—fear is achieved.

Closer to Avila's style is young producer Mirko Alvarez’s zombie short, Requiem para una noche de farra. Yet, even this one comes armed with a darkly humorous social statement, drawing comparisons between the undead and those who are inebriated. There is quite a bit of spurting blood involved, some of which ends up on the camera lens. My favorite part is the scene in which the main character dramatically smacks a zombie attacker with a guitar, then falls over and gets bitten anyway. Sound effects play an important part in this one—the blend of screaming, moaning, and heavy metal overpowers watchers, ultimately the goal of any successful terror flick.

I ask Alvarez what he thinks of the industry. He shares Avila and Hesketh’s opinion—the horror genre is simply not popular among both Bolivian consumers and producers. He also bemoans the lack of governmental support pointing to the absence of laws that favour filmmakers as well as the corresponding financial incentives. Considering the question of why people watch frightening films, Alvarez asserts that movie viewers are always eager to explore ‘topics that go beyond the comprehension, logic, and normal behavior of the human being’. This brings us back to the widespread fascination with the unknown.

It is precisely ‘the unknown’ that dominates El silencio maldito, the new film I go to see at the lovely Cinemateca Boliviana. Teenage moviegoers are trapped in a parallel universe filled with zombie-like villains who can't die. Although it is clearly low budget and the acting leaves something to be desired, there is something undeniably frightening about being locked in a completely dark room, unable to see one's assailant. The scariest character is a murderous little girl (children in horror movies never fail to be creepy). Overall, it manages to make viewers vaguely afraid to be in a cinema. Especially when you're one of only two people in the room, like I was.

It seems strange to me, after seeing these movies and talking to the producers, that there isn't a bigger market for horror in Bolivia. There is an incredible amount of potential. So many local legends are floating around, just waiting to be converted into movie scripts. This is precisely what happens in the United States, where urban myths are adapted into moderately successful horror films like Candyman, The Exorcist, Sleepy Hollow, The Mothman Prophecies, and so on. For example, why couldn't there be a blockbuster film about the Kari Kari, the sinister figure who wanders rural Bolivia taking body fat from unsuspecting victims? Perhaps these urban myths are still too real and present to reach the local audience as entertainment. So in the meantime all we must do is wait, under the blankets, with the door locked, until the next chapter in Bolivian horror film comes a’knocking.