Dawn Till Dusk At Mercado Rodriguez

A world away from the tourist haven of Sagarnaga lies Mecardo Rodriquez, the bi- ggest food market in La Paz. The streets are filled with the exuberance of local life, saturated with colours and textures and alive with characters from every corner of the city. This world awakens at four in the morning, coming into being in bitter darkness and accompanying the sun as it comes into life. Dogs and children litter the roads, creating a playground out of the mess of the market floor. Mundane characters and their lives engulf you from all directions as suspicious eyes follow your progression through the stalls, unused to foreign presence and suspicious of the camera’s lens. There is a murky beauty to the market; the abundance of colourful fruit and vegetables is set against the grime of urban life at its most chaotic.The harshness of outdoor work in the sun and rain is revealed in the appearances of the vendors as the years carve lines into their faces and their heavy produce bends their bodies. During an 18-hour work day it is no surprise that you occasionally have to rouse the sellers as busy movement and lethargy intermingle. The women sitting behind their products have become part of the market itself, becoming one with their surroundings and part of the urban landscape. As the market fades into the night the colour slowly drains. People disperse, leaving a trail of rubbish as a reminder of the past bustle. By nine in the evening it is only the dogs that remain, roaming the streets to discover forgotten treasures.

5:00. The vendors emerge and the stalls heavy with produce are uncovered after being kept under plastic over night, the possibility of theft apparently non-existent 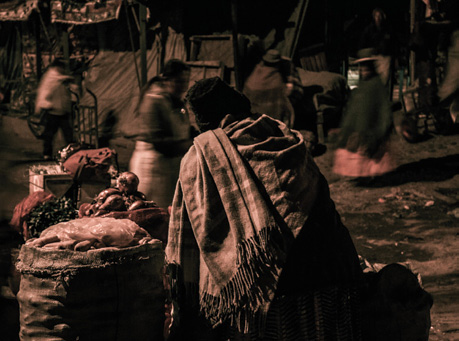 6:30. The sellers settle themselves for a long working day, finding a position that they could maintain for up to 18 hours 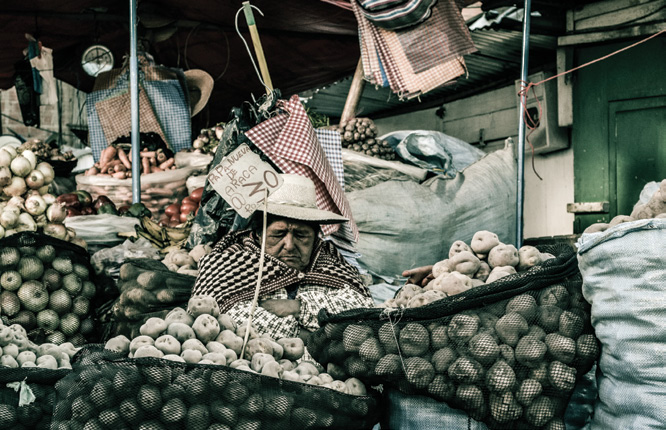 16.00. The women sitting behind their products have become part of the market itself, becoming one with their surroundings and part of the urban landscape 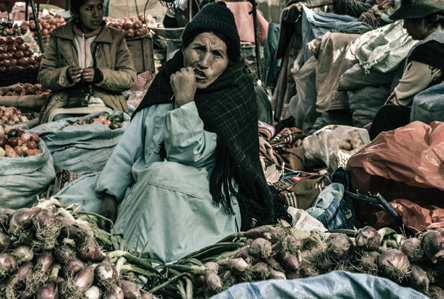 17:00. A rare opportunity to capture an expression from the merchants, most shying away from the camera’s intruding lens 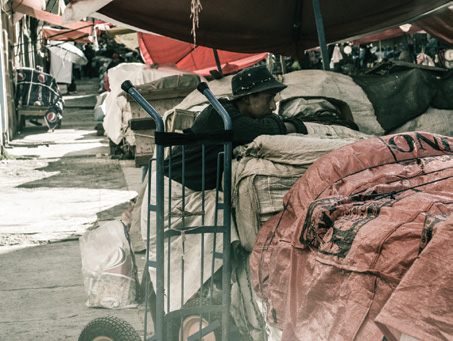 17:30. These men transport the produce through the market, selling their services to various vendors 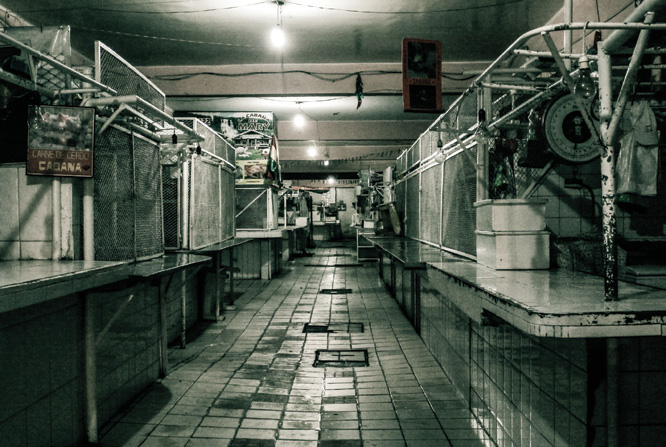 21.00. Part of the market is contained indoors, typically inhabited by the older, more seasoned cholitas. By nine o’clock, the building is eerily empty, echoing as we slip under the shutters before the men lower them fully