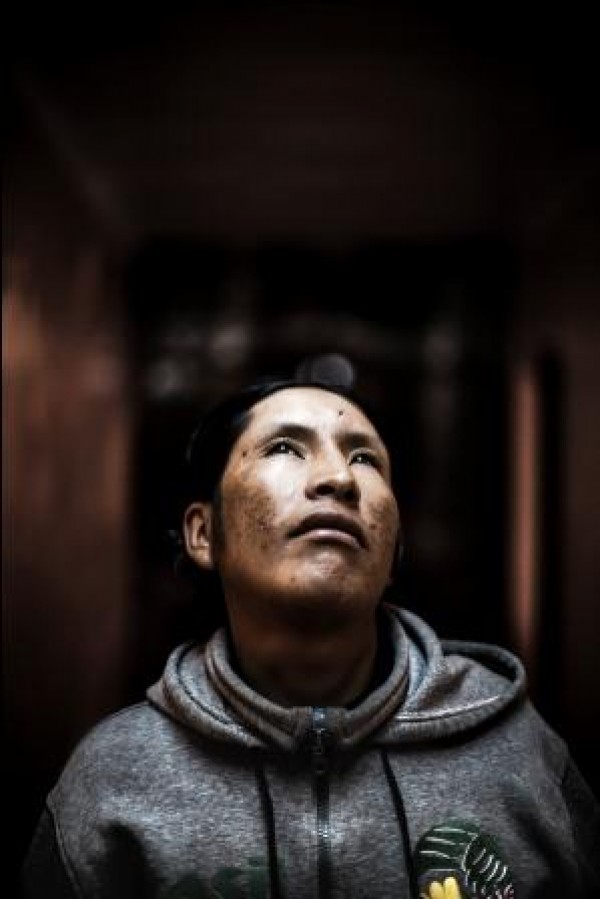 Huanuni is a small town in the altiplano, an hour’s drive from Oruro through the sparse, high-altitude countryside. Its main square is bright and colourful, with families eating ice-cream around a huge miner’s helmet statue in the center. Beyond the square, the entrance to the Huanuni Mine, the largest tin mine in Bolivia, can be seen at the top of the hill. And it is in this seemingly sunny orureño town that Kiro Russo’s new film, Viejo Calavera, is set. Yet in the film, we see no sun, nor colourful plazas. Russo’s modern and artistic film takes place in dark alleyways rife with drug and alcohol abuse, in the dark, cold nights of Huanuni’s rural surroundings and in the mine itself.

‘I feel very proud,’ says Julio César Ticona, who plays the protagonist in the film, looking down at the floor of the radio station in Huanuni. César plays the young and antisocial Elder Mamani, a young man who is forced to leave behind a life of hedonism, drugs, and alcohol to replace his recently deceased father in the mine at the age of 16. ‘I work in construction, and I’d never been so deep into the mine until we made Viejo Calavera,’ he admits. ‘I learned a lot about the miners and their work.’ But it is precisely this nuanced portrayal of Bolivian society and mining communities that has split public opinion over Russo’s new film so much.

‘There was a lot of criticism about why the film shows alcoholism and drug addiction, why not show the lives of miners, how hard they work, how they sacrifice themselves for the work they do,’ explains Narciso Choquecallata, who plays Francisco, Elder’s godfather. ‘The first time I saw it, I didn’t really understand it much. But after the second and third time, I began to understand what it was about, what it meant. It is about us, the miners from Huanuni; it shows some of the realities of living here in Huanuni – alcoholism, drug addiction. The reality is that inside of the mine, there are young people like that. So for me there is an important message in the film, especially for young people.’

‘I know myself that the film isn’t particularly conventional, but it was all in the search of trying to find something Bolivian in cinema,’ says the film’s director, Kiro Russo, who won the best Latin American Film for Viejo Calavera at the Rio de Janeiro International Film Festival. In a country that some say doesn’t have a recognisable national cinematic identity, unlike other South American countries such as Argentina or Brazil, this can certainly be seen as an ambitious project.

But it wasn’t the miners that drew Russo to Huanuni, but rather the darkness of the mine. ‘I wanted to film in darkness. And it’s from that point that I began to understand that I had to film something about miners, no matter what,’ he says. ‘In every country, there are national icons, and one of the most important icons in Bolivia are the miners.’ However, perverting this iconic image of the miner and instead portraying grittier, rawer, and human characters, the film has certainly split public opinion here. ‘Bolivia has a lot of folklore, it could even be the country that has the most folklore in all South America, but folklore isn’t culture, and this is what people here fail to recognise,’ says Russo.

The inhabitants of Huanuni themselves, seeing their own town and an uncomfortable depiction of their lives represented on screen, also had problems accepting this very contemporary, expositional and dark film. ‘Many people didn’t understand why I was showing drunk people, why wasn’t I showing people dancing, the main square. And I think it’s because here people are used to understanding culture as folklore, and when you don’t give them folklore, people think it's odd,’ expands Russo.

Understandably, creating such an avant-garde and consciously artistic project whilst living together with its subjects presents its own obstacles. ‘Apart from making the film itself, living alongside these people was incredible, it was the best,’ Russo says, who started conceiving the idea of the film and making regular trips to Huanuni in 2009. Many people in the town distrusted the cameras, permits to grant filming in the mine took over a year to obtain, and good friends made over the years visiting Huanuni had to be cut from the film due to a lack of theatrical talent. Yet, the effort of using amateur actors and legitimate miners from the town gives the film an authenticity that may not have been achieved otherwise.

‘It was the first time I’d ever acted, so at first it was difficult,’ explains César. ‘Getting comfortable in front of the cameras in those first scenes wasn’t easy, but gradually I got used to it.’ 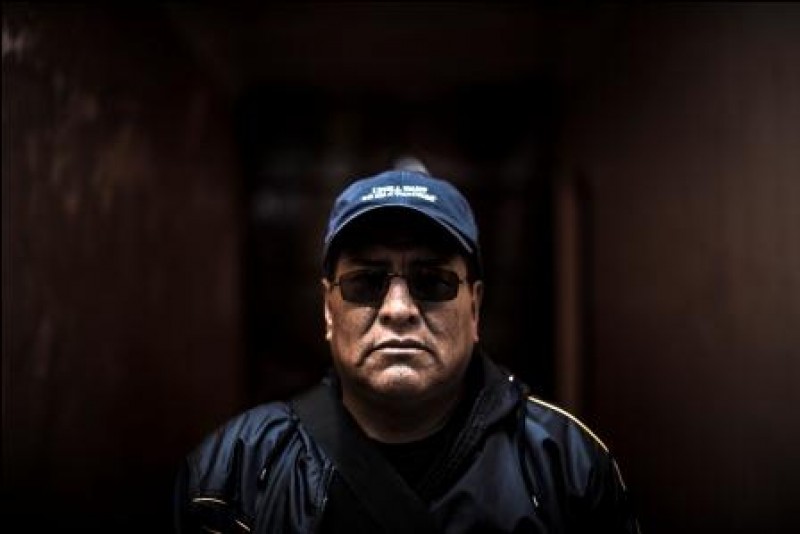 Sometimes in the street people shout “Hey calavera!”But I’ll carry on just being me.’

Another huge risk was the set itself, a Bolivian tin mine where accidents and death coexist with the quotidian. Tragedy is so commonplace, in fact, that the title itself – Spanish for  ‘Dark Skull’ – refers to death; interestingly, calavera also translates to a hedonist, a clear parallel to the film’s main character and its principal themes. Death and injury feature in the film, the catalyst of the narrative being the death of Elder’s father and Elder himself almost falling victim to a mining accident later on in the film. César explains, ‘The most difficult part was when I have an accident in the mine, I fall and I’m shouting, “Help! Help! Godfather!”’ He also recalls the generally difficult shooting conditions. ‘It was really loud,’ he explains. ‘There was dynamite and machinery, and we had to wear earplugs sometimes. There was a lot of dust, too.’

With such a flagship Bolivian film casting a spotlight on the humble town of Huanuni, it's impossible not to wonder what the impact of such a project might be on its participants. Choquecallata says with a smile, ‘It hasn’t changed my life at all. I’m still the same person, maybe except from the fact that I’m slightly more popular around here. Sometimes in the street people shout, “Hey calavera!” to me, which obviously didn’t happen before. But no, I am who I was and I’ll carry on just being me.’