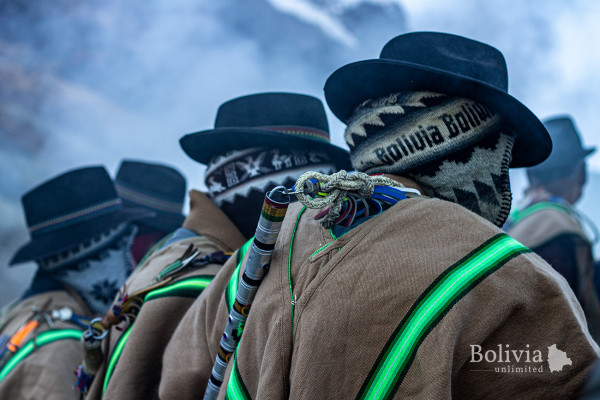 Subtitle: WHEN UKRAINIAN MODEL AND BARBIE DOPPELGÄNGER VALERIA LUKYANOVA PROCLAIMED HERSELF TO BE A REINCARNATION OF THE TIWANAKAN GOD WIRACOCHA, LITTLE DID SHE KNOW THAT SHE WAS ADDING TO BOLIVIA’S LONG, DARK AND MYSTERIOUS RELIGIOUS HISTORY. IN THIS ARTICLE, ALEX WALKER PRESENTS THREE SNAPSHOTS OF THE DARK SIDE OF BOLIVIAN FAITH, FROM THE RITUAL SACRIFICES OF THE TIWANAKU TO THE DEVIL-WORSHIPPING DECADENCE AT THE HAUNTED CURVA DEL DIABLO.

Although the Tiwanacotas—the great civilization of the altiplano around 1,000 years ago—had a number of figures they worshipped, Wiracocha was arguably the most significant. A supreme god and destroyer who ‘in the beginning created the dark’, he presents an ironic contrast to the Christian creation story in which God struck light out of darkness. Wiracocha is said to regularly visit the earth disguised as a beggar to check up on humanity and the resultant fear of upsetting or disappointing the gods is a thread that can be traced throughout Bolivian religious history. There is also something of the Romantic hero, reminiscent of Milton’s Satan in Paradise Lost, about Wiracocha. Indeed, the veneration of a sublime, omnipotent deity in Bolivia is no less strong today with the upcoming Fiesta del Gran Poder.

Similarly, it is not unheard of during the Alasitas fair for Catholic priests to be seen blessing another Tiwanakan figure: Ekeko, the god of abundance and prosperity. These kind of contradictions seem to be inherent in Bolivian faith—for example, in the paceña church La Merced, people hang ribbons on the arm of San Francisco de Paula who is now covered with scrawled curses against their enemies. These contradictions are a byproduct, perhaps, of merging pre-conquest beliefs with the Catholicism imported by Spanish conquistadors. Marcos Loayza, film-director of the 2008 Bolivian classic ‘Cuestión de fe’, tells me that ‘our whole continent is marked by a particular syncretism’, an amalgamation of different religions. This conflation of religions is nowhere more striking than in the modern-day town of Tiahuanaco where, standing guard at the entrance to the Christian church, the statues of St. Peter and St. Paul are, in fact, looted effigies from the Tiwanaku ruins.

The dependence that the Tiwanacota people had on a good harvest and obliging weather spawned a desperation to please their environmental gods. Anthropologist Carlos Candora explains that ‘the harsher the conditions, the more intense the rituals.’ Indeed, archaeologists have discovered evidence that ritual human sacrifices—including disembowelment—formed an integral part of religious practice in Tiwanaku. Even more shocking, though, was the discovery of headless mummies, indicating that decapitation also became part of their rituals.

To this day, the Aymara, descendents of the Tiwanaku and current inhabitants of the altiplano, hold ritual llama sacrifices at the end of each winter, offering their blood up to the stones in order to ‘reinvigorate the soil and give it back its agricultural potential’, according to Candora. After the tribe’s extinction, the great city of Tiwanaku was looted and torn apart by Christian conquistadors, leaving the bare, desolate ruins of today. Ironically, then, perhaps the ‘darkest’ thing to happen to this ancient society was inflicted by the insensitivity of another, invading faith.

When studying Tiwanaku religion, it is essential, according to archaeologist Dr. Jago Cooper of the British Museum, to try and detach ourselves from our own cultural lense, explaining that ‘any discussion of ritual or sacrifice has to be seen within a cultural context.’ It would be easy—perhaps even natural—to dismiss these Tiwanaku customs as barbaric due to our instinctive way of looking at the past through the cultural paradigm of the present day. However, a number of today’s topics—take capital punishment, bullfighting and alcohol consumption, for example—may well be viewed with this same contempt by the year 2050. To make the mistake of immediately denouncing Tiwanaku customs, then, would render us as guilty of cultural insensitivity as the Spanish conquistadors destroying the heart of this great, ancient civilization.

If we fast-forward 1,000 years, we find perhaps the darkest figure of worship in Bolivia today: El Tío. Miners believe that when the devil fell from heaven, he entered the earth at Potosí. It must be noted, though, that where the Western devil is synonymous solely with evil, vice and sin, El Tío represents both a malignant and a benign figure. Loayza explains that ‘our devil is not the rest of the world’s devil; he doesn’t represent evil as such. . . . He is the male figure to Mother Earth.’ In fact, many miners lead an innocently literal double life, worshipping the Catholic God above ground and El Tío down below.

It is considered essential for miners to ask El Tío for safety and prosperity in their work, as they believe that their average life expectancy—47 years—is a result of El Tío’s wrath rather than their dreadful working conditions. Juan Bacilio Apaza, 33, who has worked in the mines at Potosí since he was 10 years old, explains this dependence: ‘One must always look after El Tío—give him coca, alcohol and tobacco. This is so that he keeps us safe . . . . it is he who looks after us.’ This is strikingly portrayed in the documentary The Devil’s Miner, directed by Kief Davidson and Richard Ladkani, when Basilio—a 14-year-old working in the mine at La Cumbre—says the following words: ‘Never stop believing in El Tío. He eats the miner. He kills him then eats his soul. Only if he is generous, the devil will give us a good vein of silver and let us leave the mine alive.’ Father Sebastian Obermaier, once a miner himself, considers this fear as ‘a rejection of God . . . a failure of faith: the devil does not give life, only God can do this.’ Worship of El Tío, he believes, represents ‘a moral choice.’ The Catholic Church, of which Obermaier is a representative, is certainly not blameless for the rise of El Tío. Indeed, as The Devil’s Miner argues, the conquistadors may well have inculcated a fear of the devil to keep their horrifically exploited and mutinous workers in line.

The fear that ‘if El Tío is not fed, he will punish the miners’ is such that sacrificial offerings have become an integral part of mining culture; most notably, the ritual slaughter of llamas. More disturbing, though, is the idea that human foetuses have come to play a part in the sacrificial rituals. This, alarmingly, is not a ritual limited to the mines. Indeed, it seems it is not uncommon for human foetuses to be buried under new buildings to ensure safety and prosperity. For important and grand buildings, though, a human foetus is often considered insufficient and—in a horror story reminiscent of Edgar Allan Poe—witch doctors will prey upon alcoholics and lowlifes, taking them in and plying them with excessive amounts of food and drink until they pass out, at which point the unsuspecting street wanderer is entombed—alive but unconscious—beneath the concrete foundations.

As we make the journey down the side of the highway from our makeshift stopping point, I am decidedly sceptical. We passed the shrine on our way up, a flash of colour from the melted wax candles offered to El Tío in exchange for good fortune. It didn’t seem like a great altar for the congregation that converge here each Tuesday and Friday night. Today is Saturday, 9am: the morning after. Standing here is like sitting in an empty cinema, surrounded by torn-up tickets and empty popcorn bags, staring at a blank screen. There is evidence of life, of activity, but now there’s just a silence broken only by the rushing wind of passing vehicles. It is an eerie, haunting setting. I am also acutely aware of the nine road accidents that took place here in the first half of last year—ironic, given that people pray here to Lucifer for safety, then, that this has become something of a hotspot for traffic collisions.

With each step, we pass other strange objects: black bin bags we don’t dare disturb; solid drips of candle wax suspended on the rock face; lines of burnt-out cigarettes arranged as a decadent offering. But to whom? Legend has it that, around 20 years ago, a snake appeared from the rock face, causing a truck to crash. Then the devil’s face appeared on the rocks. But there is no face here now. When we talk to three ABC Highways Agency workers posted next to La Curva del Diablo for the last three months, they explain that the police, who usually turn a blind eye to illegalities here, tore down the devil’s face after a young man was found at the curve with his throat slit. It was believed to be an act of human sacrifice.

A local emerges from a building on the site they are repairing. He tells us that murderers and drug dealers worship at the curve; that a friend of his went drinking there and appeared the next day with an inexplicable broken nose; that the decadence begins at 8pm and only draws to a close at 5 in the morning; that chickens are the most common sacrifice—white representing benign requests and black symbolising a conveniently ambiguous ‘change of fortune’. The only chicken we could find, though, was incinerated, a mass of charcoal and ash. This, however, seems a merciful death given that live animals are often trapped and left to starve in this hellish place. As we descend towards La Curva del Diablo for a final inspection, we spy a group of morbid-looking worshippers round the corner, dissolving into the mountain. The final cholita—a vision in black—brushes past us out of nowhere, hurriedly pursuing the rest of her flock, the shredded ends of her black dress struggling to keep pace, the faceless devil awaiting open-armed.