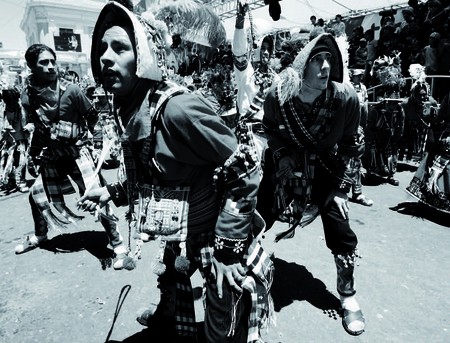 "Live this joyful moment - and share it with friends"

The Oruro Carnival is Bolivia’s biggest cultural event of the year, but what’s it like to be a foreigner dancing in the opening parade of this hugely significant festival?

Margaux Dupont, 26 and Pierre Ligonie, 24, came to La Paz several months ago to work and have been learning to dance the Tinku, a traditional Andean dance, with one of the Carnaval fraternities here in La Paz.

One Thursday evening I went down to watch a lively and enthusiastic rehearsal in which sixty or so dancers had gathered under street lamps in Plaza Bolivia, while others came off the street to join in an impromptu workshop. After allowing them to catch their breath, I sat down with Margaux and Pierre to find out more about their experiences.

BX: Why did you decide to dance the Tinku?

Margaux: I had seen the Carnival before and it was one of the dances that I liked. So it was partly because of this and partly by coincidence, because I had friends - also from outside Bolivia - who had previously danced Tinku in the Gran Poder with this fraternity. One of them wanted to dance again, so we joined in as well. Because when you want to dance in Carnival, it’s not that easy to know where and how etc. It’s much easier when you know someone. I think the Tinku has more character because of its history. Other dances like La Morenada and Caporales, for example, for me are more repetitive, whereas the Tinku has so much variety within the dance. Also I love everything that it represents, and the combat aspect of it too. This dance has so much meaning. I wouldn’t want to dance in a miniskirt either!
P: Why the Tinku? Because I wanted to flirt with Margaux! I wanted to dance a Bolivian folk dance and also to dance in the opening of the Carnaval. I met Margaux and her friends and she introduced me to the dance group. I really liked the dance, and it’s also a good way to meet people, other Bolivians, and learn about their customs in an interesting way.

BX: How many hours have you been rehearsing each week?

P: That depends on us! And on the rain!
M: There are lots of rehearsals but we don’t go to them all. Now, in the last weeks leading up to Carnival, it’s every day for an hour and a half, so we go on the days that we can. There are other fraternities that dance whatever the weather, but ours is more relaxed. Written on our shirts is the word ‘jaira’ which I think means lazybones in Quechua or Aymara! Because we are really lazy so they’ve made special shirts for us!

BX: What do you think it’s going to be like dancing in the Oruro Carnival? What are your expectations?

P: First of all, to live it from within. The atmosphere with all the spectators makes the opening an incredible experience. The connection with the public is so upbeat, and to see people dancing along feels great and gives you so much energy. And I think Oruro has the most impressive entrada. Oh, and also to see the other dances and costumes. It will be really interesting to live this joyful moment - and share it with friends.
M: Yes, for me it’s pretty much the same; the Oruro Carnival is the main event of Bolivian cultural life. I remember the first day I arrived in Bolivia, it was ages until Carnaval, but people were already talking about it. The first time I experienced Carnaval I loved it, and now for me it’s a way of completing a cycle - I danced first in the Entrada Universitaria, then in the fiesta de Gran Poder in La Paz, and now finally I’m dancing in the Carnaval de Oruro. So it’s about having this experience, enjoying ourselves and sharing it with the group
P: The physical effort is unbelievable, you feel as though you’re climbing a mountain or running a marathon.

BX: How does it feel to be a foreigner dancing in the Carnaval? Do you feel part of the group?

P: Good question! Within the group there are people who include us, and those who don’t so much. I don’t know whether it’s because we’re foreigners, or whether they just don’t get along with anyone! At the beginning I felt really foreign, like ‘who is this gringo who wants to join in...’ but in the end, they see that you are sticking with it - I think that you have to prove yourself to them a bit too. But many people are happy that foreigners want to participate. Overall there are good friendly relationships, and with the leaders of the group too. In the entradas, the public seem excited to see gringos, and when you pass they cheer you on... I feel super popular to be a gringo dancing and to have this contact with people here.
M: Generally, I think that many people are happy that foreigners are interested in their culture to the point that they want to join the dancing. It’s difficult to know, but I do think that from their perspective it can’t be easy because the gringos are always coming and going, whereas the Bolivians are always still part of it. Even if we want to live the experience, and we are willing to make the same effort, perhaps for us there is not the same compromise involved. I admit that we don’t go to all the rehearsals.

BX: The Bolivians dance in devotion to the Virgen del Socavón, so it’s their motivation and not yours...

M: We are becoming part of it but I’m kind of afraid as our style is different. Even if we manage to get the steps, something is missing. I look up to the other girls, who do the steps really well, as role models.
P: The difference perhaps is that for them it’s something really important and serious, whereas we only stay for a short while, and it’s out of curiosity and just for the experience.

“Quienes somos? Lisos somos!” (Tricky to translate but basically means “Who are we? We’re the cheekiest!”)

A few days after Carnval, I sat down with Margaux to find out how it all went and whether it lived up to her expectations!

“It was wonderful,” she said, “a really great experience but also so tiring. Physically it was very hard.” She told me that on the second day, there was only half the group still dancing because, one by one, people had dropped out due to exhaustion, headaches or because they d rank too much! “ It was a challenge to continue dancing until the end, so we were really happy that we completed it,” she added.

I asked Margaux what the funniest or most memorable moment was for her: “Well the most shameful for me was when we were dancing in the main square where all the TV cameras were, I totally messed up and was doing completely the wrong thing right in front of the camera! That was funny. I also really liked dancing during the night on the first day, with all the fireworks and lights and everything.”

I told Margaux that for me watching, the atmosphere was great: there was so much energy, not only amongst the dancers, but the crowd too. “Yes, it really was fantastic” she replied, “There was a real communication between the dancers and the public. The crowds were so lively and really encouraged you.”

“It was an incredible experience for us both. We loved it.”