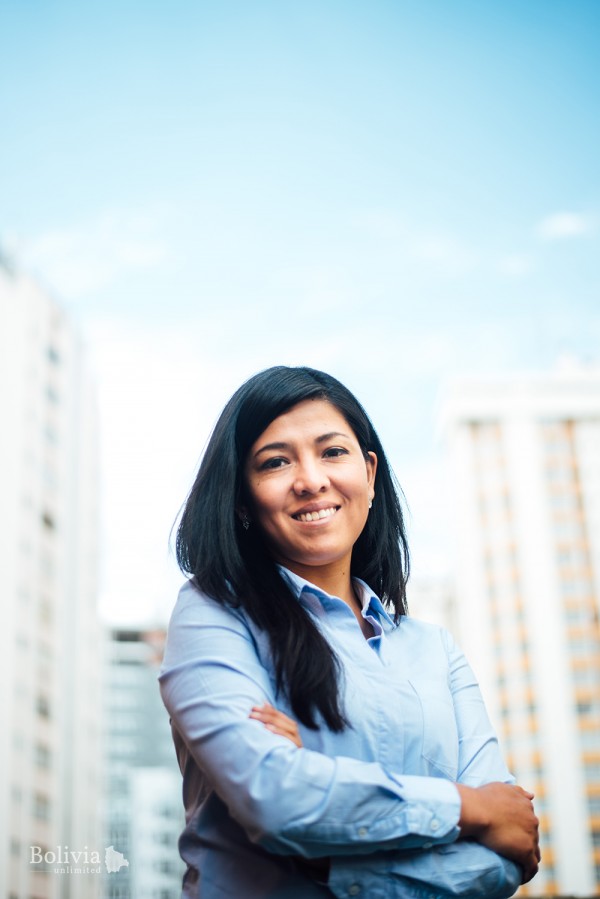 How can you make a car go from point A to point B using only the power of the wind? This is one of the technological quandaries that children and teenagers aged 7 to 18 are trying to solve in the Elemental technological school, founded in 2016 by Daniella García Moreno, that teaches programming and robotics and prepares students for the jobs of the future.

A systems engineer, entrepreneur and educator, García was featured in MIT Technology Review’s 2016 ‘Innovators Under 35’ list for Paraguay and Bolivia for her work with Elemental, a recognition she received only six months after opening the school. She also received a grant to be one of the selected fellows in the US State Department’s Young Leaders of the Americas Initiative.

Born in Oruro, García studied in Cochabamba at the University of San Simón, where she graduated with a degree in systems engineering. She developed software for eight years before moving to La Paz and founding her school. García’s impetus in creating the Elemental school was to address a problem she had frequently encountered while she was working. ‘There was alway a high demand for technological talent, and they were always looking to hire, but there were never enough qualified professionals,’ García says. ‘I wondered, “What was the problem?” The work environment is good, schedules are good, and we live in a country with high unemployment. So it didn’t make sense.’

‘Generation Z are digital natives. They use the technology like natives, even better than their parents. How is it that education hasn’t adjusted to these needs?’

The answer, she found out, was deeply rooted in education and in how technology is not appropriately taught to new generations: ‘Children are not incentivised or exposed to technological areas,’ García explains. ‘We don’t see programming in schools; they [only] use Word, Excel, Powerpoint, and this is very basic,’ García says. ‘Especially since Generation Z, those who are between 7 and 21 years old, are digital natives. They use the technology like natives, even better than their parents. How is it that education hasn’t adjusted to these needs?’

García sees a real potential in the new generation. Her flagship programme, Criados Digitales, bets on that. Through it, teens participate in the Bolivian Olympiad of Informatics. ‘It started as an experiment; [last year] in the departmental competition, we won 80% of the medals, and eight medals on the national level,’ García says. ‘Sixteen children were selected; they were good at maths but had never seen programming before. And we took them from not knowing anything about programming to winning medals in seven months.’

Which is why, García says, it’s essential to stimulate and give children technological tools from an early age. Initially, the school started with programming classes and robotics. The children learn how to create electronic circuits and install sensors and other robotic devices. Now the programmes are expanding to 3D design, drone assembly, mobile-app creation and even video production for YouTube.

García’s vision encompasses more than just technology, though; Elemental’s motto is ‘To Prepare Our Children for the Jobs of the Future.’ And this involves instilling creativity, leadership skills and resilience. Using the car experiment mentioned above as an example, the students develop critical thinking: ‘They start building the car, we give them the materials, and we give them a balloon,’ García says. ‘So they blow the balloon but it’s not stable, or it doesn’t go as far as they want. Only with trial and error can they solve the problem.’

Launching this month on 9 April is one of Elemental’s new programmes: STEAM, which stands for Sciences, Technology, Engineering, Arts and Mathematics. It’s an inclusive, months-long multidisciplinary course that dabbles in all these areas, in addition to entrepreneurship and financial education. Children start with programming, then 3D design. They start mapping different car parts before 3D printing them. They then build electronic circuits to make that car move. Then comes the applied-sciences innovation module, in which the students are confronted with a problem that they have to solve. As García puts it: ‘It’s a learning process that teaches them that they won’t get it right the first time. They develop resilience. They learn to not get frustrated and to learn how to fail.’

With this project, García is empowering a new generation to better equip themselves for the future so they can become actors of social change. ‘Most of these social problems can be solved with technology,’ García believes. ‘And the solution can come from the citizens.’ Her social responsibility initiative ‘Digital Heroes’ is a technological contest that Elemental organises in partnership with the municipalities of La Paz and El Alto, in which children and teens are asked to identify a problem in their communities and solve it by creating mobile applications. This also involves developing a business model to generate money for the apps to be sustainable.

‘Most social problems can be solved with technology. And the solution can come from the citizens.’

Elemental and García’s successes are an encouragement to move forward and reach more people. Soon, a new Elemental location will open in Santa Cruz and, if García has her way, in other Latin American countries. The school is also targeting adults by offering courses on how to use Facebook for marketing and how to sell products online. Technology and sciences are not and should not be restricted to a small (geeky) fringe of the population; it’s a part of our everyday lives and deserving of more consideration and investment. But there’s also more work to do inside the school: García laments that only 10% of the 120 students enrolled in Elemental are girls, but she is working on changing that, setting an example for a new generation.