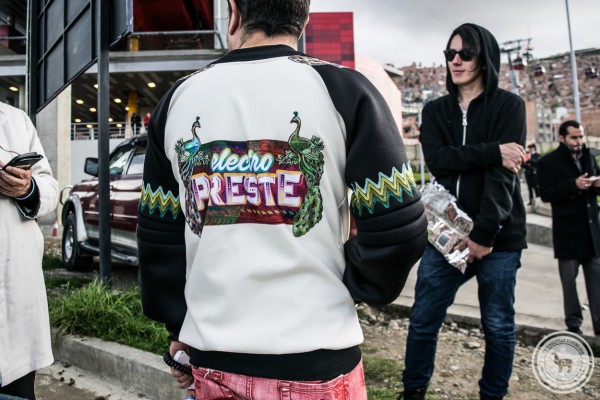 In the ever more international and multicultural Bolivia, one of the best portraits of the country, at least from a cultural point of view, might be the Electro Preste. A predominantly electronic music festival, the Electro Preste also showcases Andean music, cumbia, and hip-hop. Fans from all over Latin America, the United States, and even Europe attend the festival in the Bolivian autumn, according to José Antonio Bedregal, one of the event’s organisers.

On Friday 31 March, this year’s festival took place in the salon Mega Zafiro, in La Paz’s Garita de Lima neighbourhood, accessible by the red teleférico station near the Cementerio General.

Electro Preste is a mixture of traditional and folkloric Bolivian culture and modernity. As proof of this, just look at the name: it’s a fusion of electro, the popular musical genre, and preste, once a tradition in which a saint provided protection to a person, now a type of sponsored party. Metaphorically, this is what happens during the party, as DJs take turns at the console to entertain people and make them dance.

Before the party, near the teleférico stop, it was impossible to miss the cholitas luchadoras, wrestling their way to greet attendees as they arrived. These female Bolivian wrestlers, aged 15 to 55, competed with each other in – and out of – a ring in which anything goes. In Bolivia, this kind of lucha libre was born around the 1950s and soon became popular thanks to El Santo, a Mexican fighter who travelled around South America teaching the art (or artifice) of grappling. At first, only men fought, but now women have also begun to participate in the sport – and they’re taking up much of the spotlight.

After enjoying the wrestling, a long procession of attendees wound from the ring to the Electro Preste’s location, a massive cholet, a building constructed in the contemporary Andean style. This architectural movement was dreamt up by Freddy Mamani Silvestre, a Bolivian architect who combines imagery from the Andes – particularly the ancient ruins of Tiwanaku – with new design and architectural techniques. So far, there are more than 160 such buildings in Bolivia – astonishing when you consider that this movement is only 10 years old. It’s already a symbol of Bolivian identity, particularly among the Aymara nouveau riche populating parts of El Alto.

At this Electro Preste, the crowd was treated to a performance by Nick Warren, the famous English DJ and electro-house music legend, who was enjoying his first time in Bolivia. Last year’s event was held in a similar space in El Alto, with more than 1,500 people attending. This year, it was moved to La Paz to accommodate a larger crowd and to draw more people from the city’s southern region.

José Bedregal and his crew, including Marco Cuba and Anibal Aguilar, have created an international event that remains faithful to its Bolivian essence, something thoroughly enjoyed and not forgotten by its attendees, many of whom partied until dawn. If you like electronic music and local traditions, be sure not to miss the next Electro Preste in 2018.