Dance of the Devils 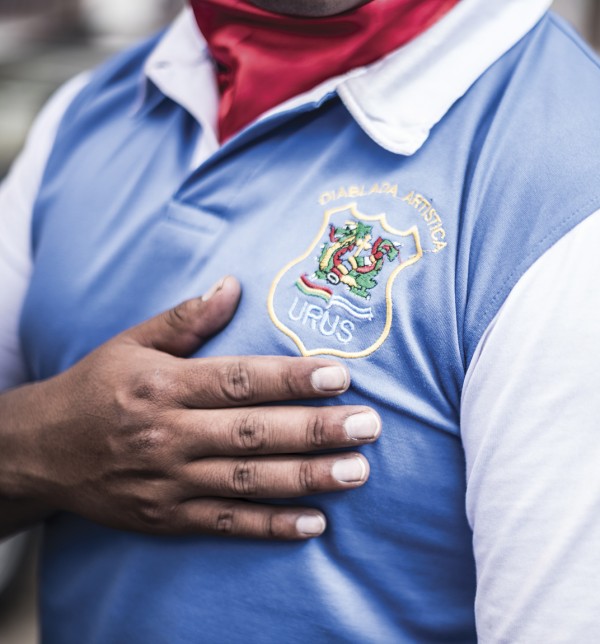 The changing traditions of the Diablada

The bells on the spurs of each man’s left shoe sound in time with the boisterous music of the band. The Urus, a comparatively young Diablada dance troupe founded in 1960, rehearse by marching up and down the street in groups, twirling colourful handkerchiefs. Famed for their exquisite costumes, they dance the Diablada at the Carnival celebrations in Oruro every year. Their dance is a struggle of good versus evil: a fight between legions of devils and angels. It culminates in Saint Michael’s victory over Lucifer and his triumph over each of the seven deadly sins.

At the rehearsal on Oruro’s Avenida Teniente Villa there are dancers of all ages and abilities. There are small children dancing alongside adults old enough to be their grandparents. ‘My dad is the oldest dancer and now he is the president of the Urus. There is a feeling that we practice as a family,’ says Alicia Navier Mier, a dancer who performs as a Ñuapa China in the Diablada. ‘Those who have grown up dancing Diablada feel something special in their hearts. We live with the music, we hear it anywhere and we dance. It’s indescribable,’ She says with a smile.

Although there are other dances performed during Carnival, such as the Morenada, the Diablada is a favourite for many. With its diverse characters, costumes, and the astonishing athleticism of its steps, this is hardly surprising. Martin Riveros, who is a member of the fraternidad, dances alongside others with costumes inspired by lizards, snakes, ants and other creatures. ‘Our block is called the Four Plagues because those are the plagues that have invaded our city,’ he explains. ‘Our costumes try to show that. We have been innovating without distorting anything.’

On 18 May 2001, the ‘Carnaval de Oruro’ was recognised as one of the Masterpieces of the Oral and Intangible Heritage of Humanity by UNESCO. Alicia and many others believe the Diablada is the principal contributor to this success. ‘Without the Diablada there would be no Carnival,’ she says. The Urus, however, believe that without faith there would be no Diablada. Their uniforms represent the blue and white colours of the sky and their most important values are faith, passion, and devotion to the Virgin of Socavón, the patron of the mines and miners. ‘I dance out of devotion for the Virgin,’ Martin says, ‘not for people to see me, because we all wear masks.’

Although the origin of the Diablada is disputed, some believe it originated as a celebration for the Virgin after miracles such as the legend of Chiru-Chiru, who is said to have been a notorious bandit that stole from the rich and gave to the poor. It is said that Chiru-Chiru became mortally wounded during an attempted robbery and retreated to the mine, where the Virgin appeared to him as he lay dying and repenting his sins. According to the legend, after his death the image of the Virgin was found on the wall above his body.

This is one of many legends that shroud the origins of the Diablada. Another tale is that of a miner who fell asleep in the mine after a ch’alla, or blessing, and woke up to the devil dancing in front of him. He followed the devil’s dance out of the mine and gave life to the Diablada. 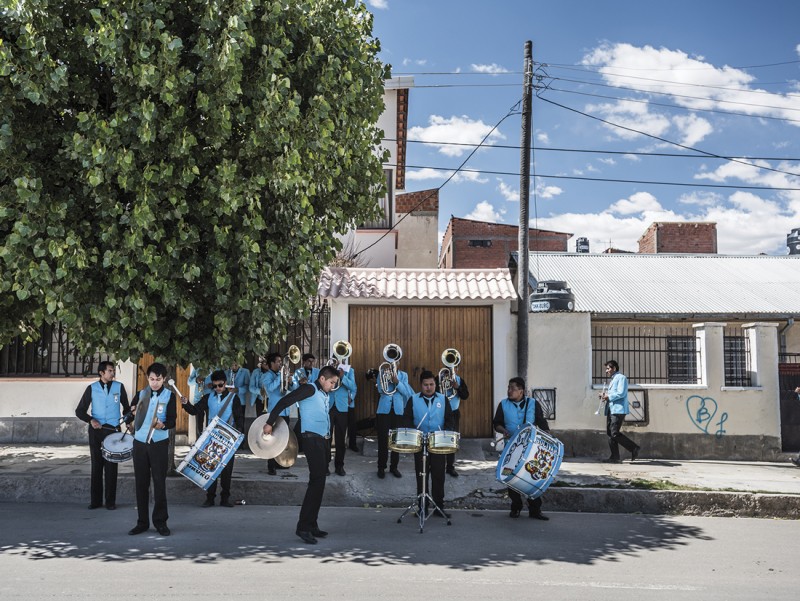 Despite the various legends, the Diablada has evolved beyond its origin and has become hugely popular throughout Bolivia. With the passage of time, there have been significant changes to the characters in the dance. Some have disappeared and others have been added. In the past, for example, women were not allowed to dance the Diablada. Instead, men would perform the female roles such as the China Supay. Over time, women began performing as the Chinas Supay in addition to other characters like the Ñuapa Chinas, Ñuapa Diablos, and female Angels. The development of new characters ‘has opened spaces for social actors to form a part of the Diablada,’ Morales explains. ‘In some cases, there are young women who have to dance, or older women (the Ñuapa Chinas) who can’t dance at the same rhythm as the rest of the group, but are important to denote their seniority.’

Women have been given space through the character of the Diablesa, which was created 18 to 20 years ago as the female counterpart to the Diablos, or ‘devils’. According to Mildred San Martín Argandoña, a Diablesa performer, ‘it is very different from the China Supay because they are more flirtatious, but we represent the feminine part of the Diablos better.’ The costumes of the Diablos and the Diablesas are very similar, with Diablesas wearing skirts instead of trousers. ‘The dress has changed and evolved, but always in order to improve’ Mildred says.

Originally, the Ñuapa China was the leading female devil figure, wearing a long skirt. As the Chinas Supay developed, the Diablada began to feature female costumes with short skirts. ‘Chinas Supay are the sexiest’ Alicia says, giggling. But this was not always the case. During the 1910s and 1920s their masks ‘had to be terrifying to frighten people. In some cases they had a broken nose, which is a symbol of their relationship with the devil. . . as well as a split tongue. It wasn’t such a feminine form, but now that has totally changed,’ Morales says. Alicia believes that the Chinas Supay appeared ‘because everything is evolving. There are new blocks of characters that give space to the girls who want to dance as Chinas and therefore the Ñaupa Chinas are now older people.’

The Urus themselves have also evolved with time. ‘When I joined the URUS we were 70 and now we have around 600 members,’ Martin says. The dance troupe has instituted a number of new technologies in their Diablada, including a small flamethrower attached to the top of some Diablos masks. They also use electric lights on head pieces, and large sparklers. These pyrotechnic elements are one of the reasons the public enjoys the Diablada. It is a spectacle to behold. Despite the influence of these new technologies, Martin tells me that ‘the Urus want to preserve the traditions and the culture of the Diablada.’ The culture of the Diablada is truly important to the Urus, many of them tell me that it represents Oruro, that it represents Bolivia.

According to the dancers, due to its cultural significance the Diablada as it is today will never disappear. ‘Orureños are born with a spirit of dancing,’ Alicia says. ‘Listening to the music of Diablada is part of our being.’