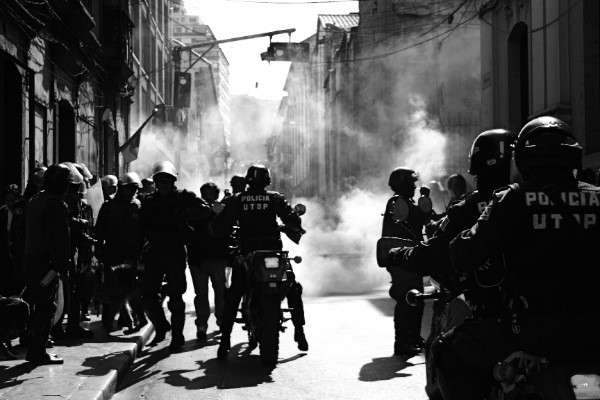 It’s not often that a president who returns with 64% of the popular vote (nearly 40% more than their nearest rival) faces stern political opposition eight months into their presidency, but then, Evo Morales is not your typical president. Always a controversial figure, the country’s first Aymara President is once again causing a stir among his people, but, worryingly for his government, the traditional lines of division are shifting.

As a champion for an oppressed majority, it hardly needs saying that not all sections of Bolivian society have been fans of Evo. Business leaders and the middle classes have been suspicious (or outright hostile) towards his socialist motivations, and the financial centre of Santa Cruz has been demanding greater autonomy. However, increasingly his regime is subject to protests closer to home, as recent protests over the new customs law attest. On these marches, which are happening two or three times a week, protestations come from both Aymara and Quechua communities, and from regions as diverse as La Paz, Potosi and Morales’ home region of Oruro. During Independence Day celebrations in the traditionally supportive urban expanse of El Alto, a man drukenly heckles the town’s president, proclaiming Morales a “bastardo” before he is dealt with, subtly yet effectively, when his seating is removed.

Why has this change come about? One complaint we hear during a relatively peaceful march is that the enforcement of taxes on cheap imports is tantamount to communism. One wonders what else to expect from a movimiento al socialismo. Of course, not everyone on the march voted for Morales, or at least is ready to admit that they did. But those who do are noticeably embarrassed by their admission. He is branded a “traidor”, and it is ostensibly easy to see why. The enforcement of taxes on cheap imports will raise the cost of living disproportionately for the poor who buy the goods, and also the lower-middle class vendors who sell them. However, there is a definite sense of paradox surrounding the protests, and one gets the sense that, predictably, the people are willing to support socialism only so long as they can benefit from it. As soon it becomes clear that in practice, socialism means higher taxes for all, suddenly it is not so appealing. Viewed as a champion of the lower classes, Morales’ actions can seem treacherous, but as a champion of socialism, his treachery is far less obvious – indeed, to embrace free trade would be far more ideologically inconsistent.

Regardless of such technicalities, if the working classes feel that Morales has abandoned them, opposition will mount and his government could be in trouble. However, it is time to challenge the lazy assumption that the middle classes are necessarily against Morales. His dominant victory in the presidential election reflects a growing support for his leadership in more bourgeois circles. The Bolivian economy fared relatively well during the global financial crisis, growth has been steady, and one section of society that should benefit from enforced trade tariffs are the Bolivian producers and owners of industry. While such tariffs do distort the market, their global presence, from the Common Agricultural Policy in Europe to protectionism of sugar in the USA, reflects the political bonus that governments can gain from interest groups in their electorate.

However, at the moment this political bonus seems dwarfed by the alert consumers of Bolivia, who are most concerned about the costs to their own pockets. What it may boil down to is necessity: whether Morales needs the support of the protesters more than they need the country’s first indigenous president. For the paradox of the crowds suggests that, while they may protest against Evo’s current actions, you wouldn’t bet against them abashedly voting for his party again.