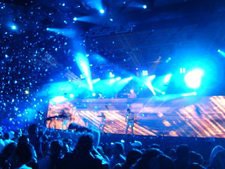 Reviews, Lifestyle, Going Out and Festivals

All four of us are still dog tagged in our wrists – we’re all blue (VIP) members of Crossfest 2011 even though we had left Santa Cruz four days ago, and will still continue to be for months to come until the blue non-biodegradable tag disintegrates by itself, in its own right and time to come.
It sure is slaggish to wear sunglasses at night (re: Corey Hart’s song comes to mind) but in this case it was more a matter of necessity than an accessory. The laser-lights and deluge of fluorescent vomit of rainbows colors from above the DJ stand made it nearly impossible to appreciate neither Christopher Lawrence nor the milky skins of the scantily clad dancers. Even the cages by the perimeters of the stage in which dancers are (impressively pole-dancing to house music, nonetheless) were shielded off from our eyes by much too bright lights.

The opening act consisted of DJs from La Paz (strangely no Santa Cruzian deejays were on the lineup), namely Gonzalo, Marco and Anibal. It was warm-up for the main acts Seb Fontain, Second Sun and the aforementioned Christopher Lawrence.
One Champagne de Andres Rose and Smirnoff later, we were on the dancefloor and away from the VIP area which was smothered with TV presenters and showgirls (one of whom was conducting interviews with a hand-muppet of a llama donning shades). Robbie got to make acquaintances with Lawrence thanks to Ivan’s press pass, but he reckons he looks too much like his father to be actually homies with him. Maeva and I were busy thrashing about. The local trio-act joined us shortly after with a swagger only a Smirnoff bottle can impart. The music was phenomenal to our ears. We didn’t stop to rest, but then again we did not feel tired either. We took swigs, we tripped, we swayed and we did tangos. We also stared at the dancers – they were a sight to behold, not unlike the magnificent peacock wandering about Los Tajibos (the hotel).

Seven hours passed. Did it really? We felt exhausted only after knowing the time, though. Downing just one last (not really) shot at the bar, we followed the last men standing out of the Sonarium (the stadium hosting Crossfest). Into the cab and off we went… to an afterparty at someone’s house (we weren’t sure). Marco handed us beers but we were really just keen on one tall, mesmerizing wooden giraffe ornament. We got out at 9AM, groggily humming and with Seb’s tunes still ringing in our ears.