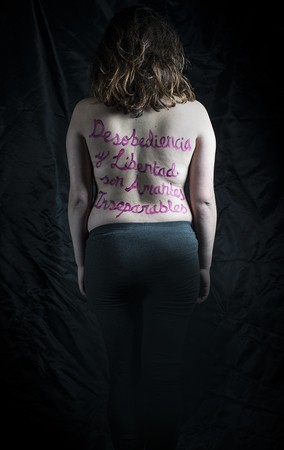 It is almost impossible to spend time in La Paz without encountering the work of Mujeres Creando. Even if you don’t go out of your way to visit their headquarters in La Virgen de los Deseos or if you miss the daily broadcasts of Radio Deseo, you will be confronted by their graffiti on the streets. It is easily distinguishable from the usual political slogans in both content and style.

So, who are Mujeres Creando? What kind of anarcha-feminist society do they strive to create? Why is their existence necessary in Bolivia today? In the context of our Wonderland issue, I set out to ask Julieta Ojeda, who is one of the main activists in the organization, what an ideal society would look like for her.

‘We want to create a society without military violence,” she continues, “with freedom for our bodies, with sexual freedom. As a grassroots organization, we are forming cooperative groups against the hegemony of capitalism.”

Despite the group’s idealism, for Mujeres Creando theory is less important than action. In fact, direct political action is an inextricable part of anarcha-feminist philosophy. The Organization rejects all forms of mainstream politics as well as the structures of representative liberal democracy. For this reason, they see no choice but to be active and to find alternative ways to organize individuals.

According to feminist Writer Anavel Simotas: ‘Anarcha-feminism teaches that the individual has the power to affect their own life, and that women can take direct action on a micro and macro level to transform lives around the world’. This is a view that drives Mujeres Creando’s programme of direct action.

‘We are a movement without the desire to build a political party, without dependency on the state. We are creating our kind of politics… We entirely reject this upcoming election, which ignores grassroots groups like our own’, Julieta Ojeda told me.

If anything emerges from our conversation, it is that Mujeres Creando is primarily focused as an organization on responding to the needs of individual women in Bolivia. ‘We are active in providing day care and legal advisory services’, Julieta explained, ‘We work with housekeepers and prostitutes’.

Why do they do it? I ask her. What sort of discrimination do women face in Bolivia today? According to Julieta, the issues that give purpose to the movement are the continued criminalization of abortion; structural homophobia; the incidences of violence against women; and the political power of the Catholic Church, which extends far beyond ecclesiastical activities.

Not every women’s organization in Bolivia would agree with Mujeres Creando. Although there are many prominent issues which remain to be discussed within the country, such as the gender pay gap and the devaluation of women’ labour (problems which, obviously, are not unique to Bolivia), some groups believe that much progress has been made for their cause under Morales’ leadership. The government, for example, recently passed a law against femicide that carries a 30 year penalty for the perpetrator. This is a move that many groups welcome, because it signals for them that the government is making a serious effort to curb violence against women.

Julieta, however, is quick to dismiss this landmark event as tokenism: ‘The law against femicide exists to defend women,’ she concedes, ‘but it has a lot of contradictions with other laws. It’s there but it doesn't work in practice’.

That said, Bolivia is one of the few countries in the world that can boast gender parity in its government’s cabinet. Womens’ issues here often exist in contradiction. While women currently cannot choose to have an abortion, there have been recent improvements in local laws that improve the lives of women who need one. Doctors are now allowed to determine the need for an abortion in cases of rape or life-threatening circumstances. Before these changes to the law, only a civil judge could legally grant this right, forcing many Bolivian women to turn to illegal- and often highly dangerous- abortions.

Is this really what progress looks like? Julieta asks, alongside the members of Mujeres Creando. Is the end-goal of women's’ liberation to force a change in legislation?

Without a boss or a traditional hierarchy in the organization, Mujeres Creando strives to reach beyond the channels of a representative democracy. Its members watch over a programme of consciousness-raising campaigns and direct action from their own Palace of Government at La Virgen de los Deseos. Their aim is to struggle for the voices of women and homosexuals and non-binary individuals. And the streets of La Paz are their chosen arena. These women reclaim public spaces through protest, performance and, most crucially, graffiti.

They are activists, though, not only artists, Julieta explains. Graffiti is ‘a creative intervention, a different kind of struggle’. It is the way in which marginalized women can place themselves loudly, visibly, at the centre of Bolivian society.

As I leave La Virgen de los Deseos, an unconventional Wonderland, a cholita comes to pick up her child from the day-care centre that operates in the building. The walls are decorated with a mural in celebration of working mothers, entitled Mi Mamá Trabaja. The scene, which would be mundane in any other scenario, is in this case subversive, even radical. This is precisely how Mujeres Creando aims to undermine the Bolivian state: by creating cooperative organizations that serve the daily needs of marginalized women.

‘We are NOT interested in being part of the government’, Julieta says. ‘Governments, laws and societies always make the same mistakes. We prioritize the needs of women’.