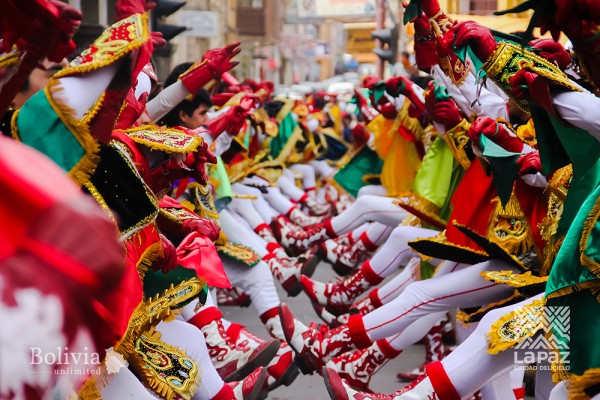 With each year’s approach of Lent, an eruption of vibrant colours, noises and spirits (both divine and alcoholic) detonates in the otherwise dormant mining town of Oruro. Extravagantly clad dancers, beautifully crafted costumes and soul-stirring music pack the streets for hours upon hours, signalling the arrival of the town’s world renowned Carnaval. Attracting hundreds of thousands of spectators each year, the Carnaval de Oruro is the must-see tourist attraction in Bolivia, offering an experience for both local and tourist unlike any other. As a high-spirited gringa travelling in South America with the desire to add as many ‘once-in-a-lifetime’ experiences to my gap year repertoire, the opportunity to experience Carnaval as an official member of la prensa seemed too good to miss. 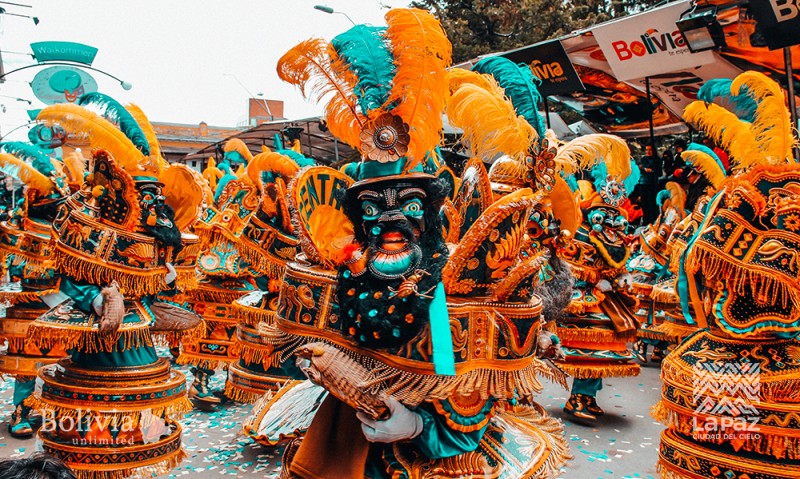 What is Carnaval? Where did it come from? And why is it such a big deal? Much to my surprise, I came to learn that despite such a positioning in the calendar that would suggest it being a Christian festival, in reality the festivities of the Carnaval de Oruro are deeply rooted in the indigenous culture of the Bolivian people. Several centuries ago, before Spanish colonisation, the Andean town of Uru Uru was a city of particular religious significance as people from Aymara and Quechua communities near and far would flock to pray to their deities for protection and to give thanks to Pachamama. When the Spanish conquistadors arrived in the 17th century, the city of Oruro was founded and locals were forced to work in the mines from which the Spanish were to extract vast quantities of precious minerals. In addition to stealing their land and forcing the locals to work it for their benefit, the Spanish also sought to impose Catholicism upon Oruro and its people. Although Andean traditions and rituals were prohibited by Catholic priests, the locals continued to practise their customs under the pretence that they were performing Catholic rituals. Over the following 200 years, these indigenous customs evolved into Catholic liturgy and gave way to the celebration we know today as the Carnaval de Oruro. Therefore, despite my mistaking Carnaval in Bolivia as a solely Catholic festival, it is in fact also a celebration of indigenous culture, customs and rituals. 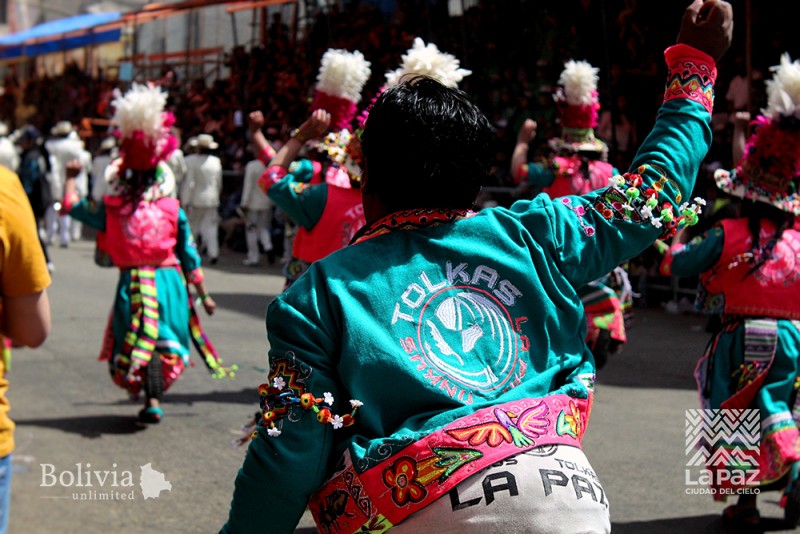 After our lengthy early-morning journey across the altiplano from La Paz to Oruro, a quick lunch and a good hour spent trying to get our hands onto some tickets, we made our way down to the central street of Oruro to watch the parade. Finally managing to locate our block of seats, we were unwittingly confronted with the information that in order to get to them we would have to climb a four-metre makeshift ladder. And so with nerves as high as the ladder itself, one by one we made our ascent to be greeted by the sight of rows upon rows of spectators bordering both sides of the street, and a vibrant procession of multicoloured dancers parading through its centre. 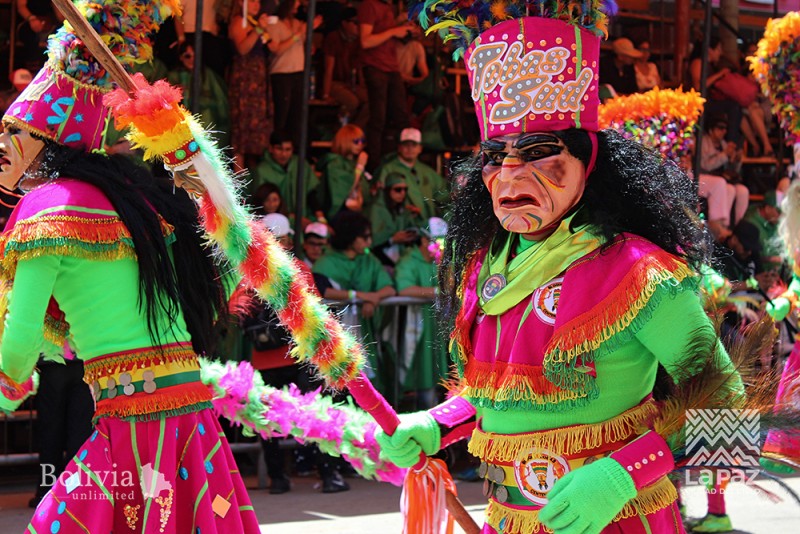 Equipped with my Bolivian Express press badge and camera, I waded down through the crowds, hopped the barrier in what was probably a much less graceful fashion than I had intended and headed straight for the approaching troupe of performers. Fanfare from the parade’s brass bands could be heard both fading into the distance ahead and approaching from the other direction as various musical groups passed through. Through the mediums of dance, costume and music, the processions and performances of Carnaval are intended to tell a culturally enriched tale of good versus evil. As well as signalling the approach of Lent, within the Oruro community Carnaval is an opportunity to make offerings and give thanks to the town’s Virgen de la Candelaria, patron of the local mines and their workers. In this spirit, cars covered in silver platters and topped with ornately decorated effigies would frequently pass through the procession, heading for the Santuario del Socavón, where they would be presented as gifts to the Virgin. 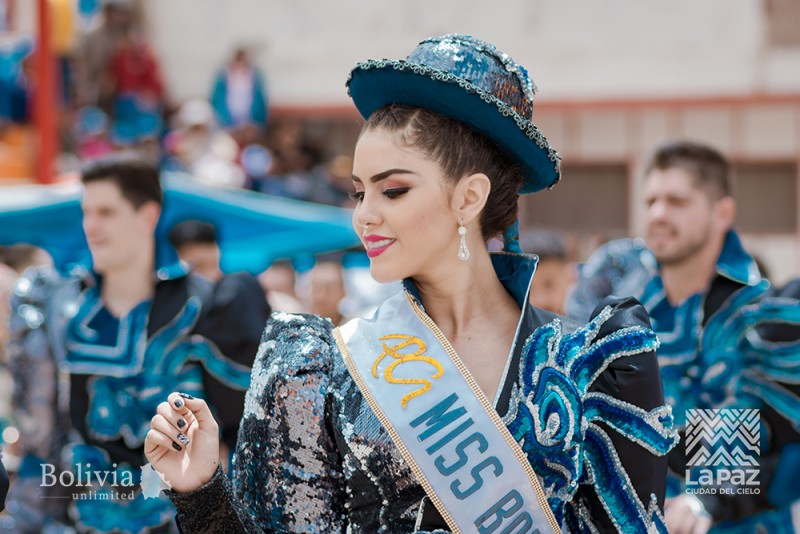 In addition to all the adoration of the Virgin, a surprising amount of devil worshipping goes on during Carnaval. The malevolent El Tío, the god of the mountains and the true owner of the mines and their resources, is seen reincarnated as the Devil during Carnaval. Amidst the festivities, miners make offerings of silver, food, alcohol and coca to El Tío in the hope that it will curb his anger at having his precious metals mined. 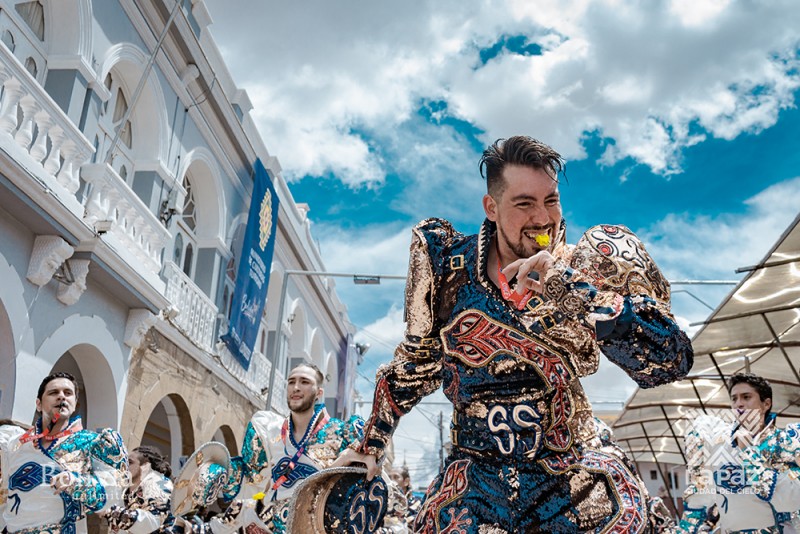 In the ultimate portrayal of good triumphing over evil, the parades of Carnival also feature the tale of San Miguel Arcángel’s defeat over the seven deadly sins. Throughout the procession, performers dressed as devils, and a whole host of animals including bears and condors representing the ancient Uru mythology, attempt to seduce the elaborately dressed San Miguel. Their efforts, however, are fruitless and the angel defeats the devils in one final battle that takes place in the town’s football stadium. Throughout the following days, these celebrations and performances progress, continually telling the tales of ancient Bolivian legends. 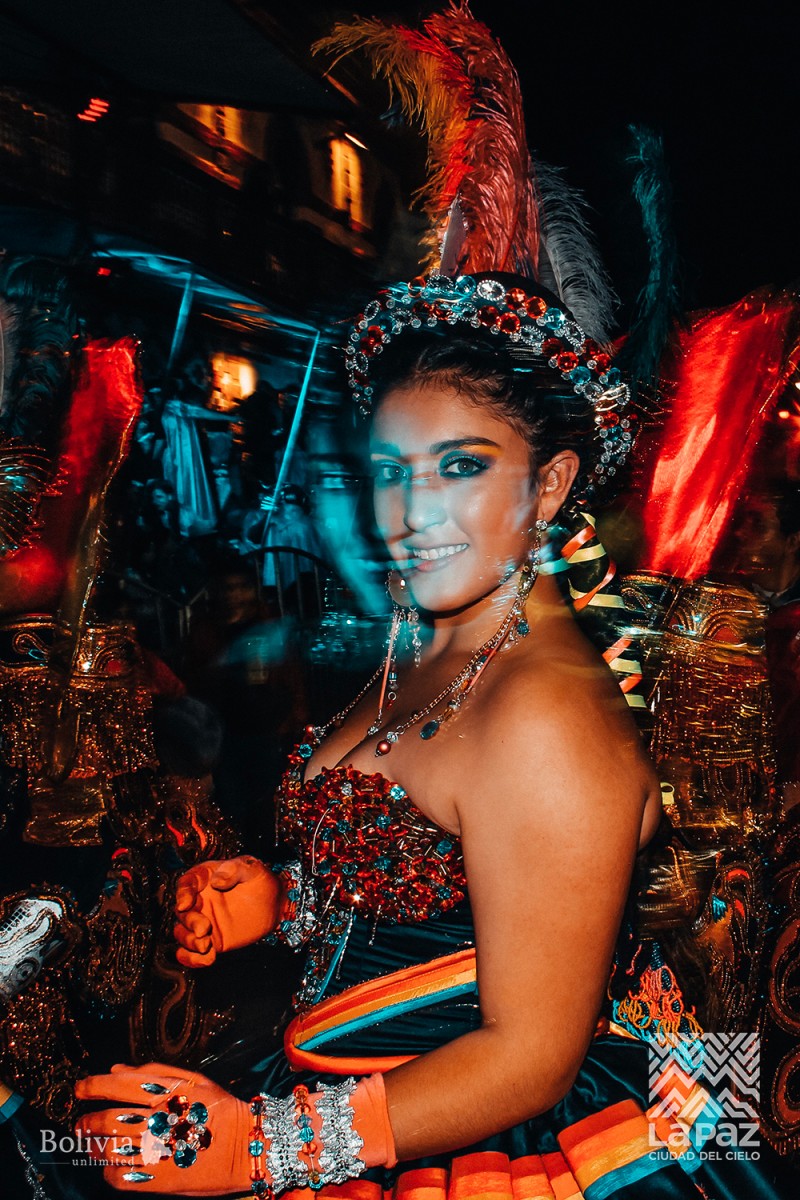 When each troupe would pass by and the parade route was temporarily empty, gangs of waterproof-poncho-clad Bolivian children would assemble, armed with multicoloured espuma cans and water pistols for the most spectacular water fight one might ever witness. Espuma, a product with which the gringa in me has come to associate immense fear, begins to appear in shops and stalls across Bolivia in the week preceding Carnaval in order that children far and wide might take stock. Once within the mischievous mitts of your average eight-year-old, a can of espuma is capable of firing vast quantities of a foamy, soap-like substance at its target. To make matters worse, said target is more often than not a foreigner such as myself, and so before long my noticeably foreign blonde hair had been soaked and the lens of my camera needed a decent wipe. Despite the trauma of the incident, however, one can’t help but smile as a sense of immense joy and silliness is felt throughout the audience. This existence of extensive and frequent water fights is not constrained just to the parades but in fact characterises the entire Carnaval period, making any trip even in La Paz considerably intimidating. This tradition dates back to the days of the Inca Empire, when folk would throw water about post-harvest to ensure that the spirits who had been stirred would return to the soil.

Bolivian children, armed with multicoloured espuma cans and water pistols, wage the most spectacular water fight one might ever witness.

This year, Carnaval also saw the arrival of new legislation regarding the use of alcohol during celebrations. In a bid to reduce the risk of unwanted accidents, La Ley Seca was introduced by the Municipal Council of Oruro as a 16-hour-long prohibition of the sale or consumption of alcohol between 3am and 7pm on Pilgrimage Saturday. Last year, various tragic explosions caused by faulty propane tanks in some food stalls resulted in 12 deaths, and in 2014 the collapse of an elevated walkway led to five deaths. This year, despite a few raised eyebrows here and there, the new law was relatively well adhered to. At the stroke of 7pm, however, a sudden change in atmosphere took hold of the city. Cans of Paceña and shots of various liquors began to materialise from the depths of people’s backpacks, and the ambience of casual afternoon entertainment quickly transformed into that of a raucous party. The pace of the parade picked up, and more and more dancers began filing along the street in ever more provocative costumes. Then almost in its 12th hour, the spirit of Carnaval was very much alive as the increasingly tipsy crowds cheered on the performers, chanting in unison ‘¡BESO!’ at the parades most glamorous maidens and ‘¡OSO!’ at those dressed from head to toe as bears. 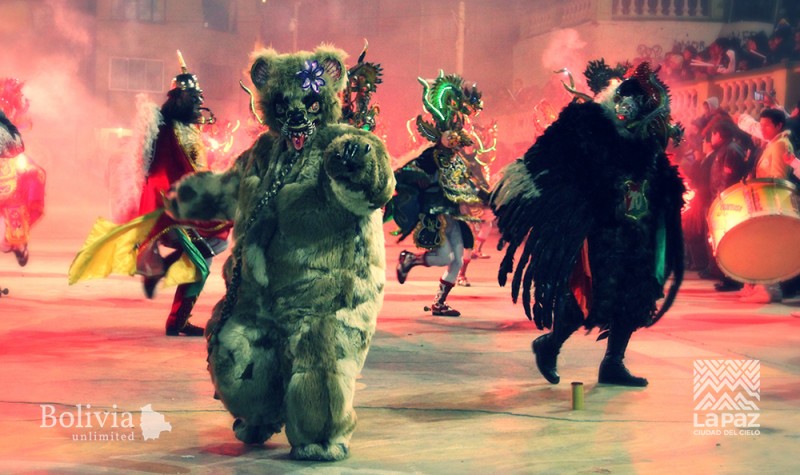 For the performers, preparation began behind the scenes long before the seats started to fill on Pilgrimage Saturday. Daniela Silva Soto from the Fraternidad Artística y Cultural la Diablada, who has been dancing for 12 years, told me how her dance troupe begins preparing for Oruro as early as November. Just as important as the dance rehearsals and costume fittings during the months before Carnaval are the religious preparations such as gatherings in honour of the Virgen del Socavón. Once Pilgrimage Saturday finally arrives, the performers are a bundle of nerves and excitement as they ready themselves. ‘Arriving at the main square in Oruro, you really feel the excitement of the audience start to accumulate,’ Silva said, ‘and as you feel this you begin to dance with more strength, continuing on this way through Avenida Cívica until the most exciting moment when you arrive at the Socavón.’

‘Arriving at the main square in Oruro, you really feel the excitement of the audience start to accumulate.’

Daniela felt proud of the sense of community and inclusivity that participation in the event embodies. ‘It’s important to me to be part of my fraternity,’ she said. ‘As well as being a part of the carnival experience, we work hard to defend the folkloric cultural heritage of our country.’ In a country where 40 percent of the population identifies as indigenous, it is clear that the opportunity to represent and celebrate this community’s traditions and customs is of great value to the Bolivian people. 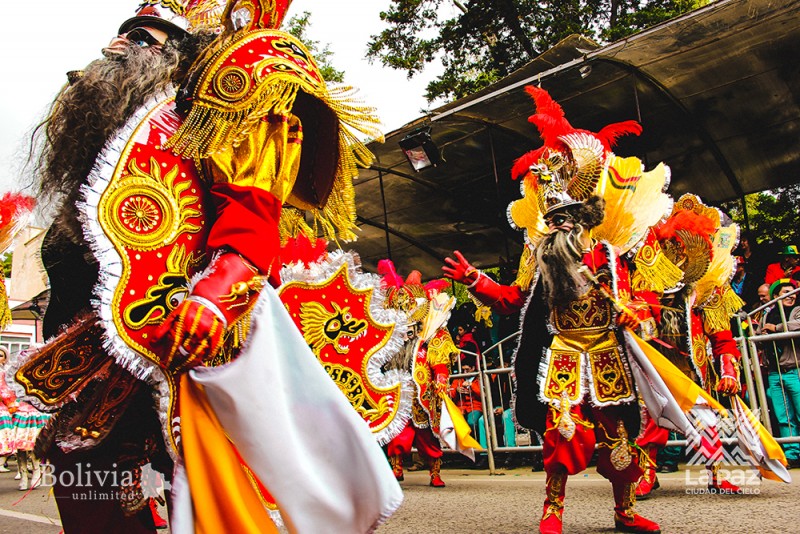