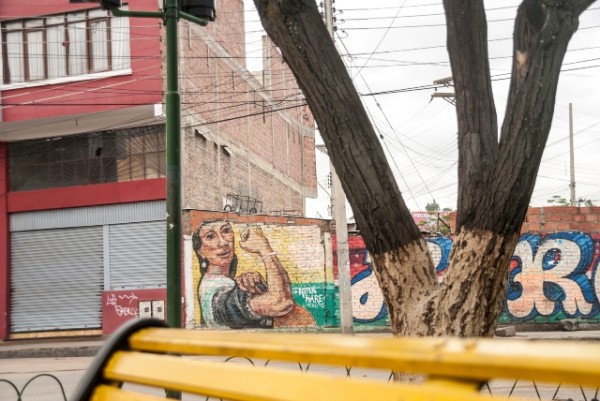 Cochabamba's Struggle to put Art Back on the Map

The dawn has bloomed just enough for a beautiful orange sky as I step off the bus. Walking through the streets, which are bathed in soft light, I notice people appear gradually as the minutes tick by. I find myself eager to begin my search for what I have come for: the contemporary art scene that this sprawling city in central Bolivia has to offer.

Cochabamba is no stranger to art. It has been a centre for some of Bolivia’s most interesting and mesmerising pieces, dating back to the nineteenth century. During the battle for independence, religious art quickly became popular and depictions of Jesus appeared more frequently within the city and its surrounding towns and villages. Traditional art, although still popular in Cochabamba, isn’t the focus any longer. These days, it’s more common to see modern and contemporary art adorning the galleries here.

There are some galleries scattered around the city, but many of them are hidden and difficult to find. The gems that one can come across in such places, however, are hardly taxing to behold. The problem lies in the amount of local art that can truly be found here. Increasingly, it’s become more of a rarity to see the work of actual cochabambino artists in their own city.

Alejandra Dorado is a contemporary performance artist who knows all too well about the industry, which seems to be suffering under the surface. ‘I think Cochabamba is suffering a crisis in art,’ she frowns. ‘A very, very strong division exists here between traditional art and modern art.'

We are sitting in her ultramodern studio, her own contemporary pieces thrown into the mix around the room. In one corner lies a t-shirt rack covered with intricate modern designs, while in another is a beautiful selection of small tapestries she has created. Next to the tapestries there are books she features in and has written. Furthermore, from her full-length window there is a view of the green mountains in front and the bustling city running smoothly below.

'I’ve put together a piece with a friend for the only performance art festival there is here in Cochabamba,’ Dorado says. ‘It only happens once every three years, because there simply aren't enough artists to fill the festival. There is an extremely small number of contemporary artists here in Cochabamba; we are talking about those who work with concept, with context, about the times now. Here, there just aren’t enough for the scene to flourish.’

It is clear to me that Dorado takes her work extremely seriously. She believes it impacts others and helps people understand issues through a type of art that is uncommon in a city such as this. Her pieces are usually based on gender issues, and she has recently worked on projects with a more political stance to try and give her view and promote that of those who inspire her art. However, according to Dorado, the issue is that there just isn’t an audience.

Alba Balderrama is the Cultural Coordinator of the Palacio Portales, an art museum in the heart of the cultural centre of the city. She agrees that, despite her museum’s continuing popularity, the scene is definitely having its problems. ‘We invite both contemporary and traditional artists to our gallery, and our popularity remains mostly 50/50 when it comes to preference between the two. Our most popular international artists come from Argentina, and in recent years the amount of artists, especially Bolivian, that we have had featured has decreased.’

Elsewhere, Cochabamba’s Casa de La Cultura, a local house for artists and different types of recreational activities, is hosting an exhibition for the artist Mario Unzueta. The majority of his pieces are paintings that focus on people and animals with varying flares of colour. His work seems tame compared with Alejandra Dorado’s studio. In particular it is not as exciting, although outrightly Bolivian, but it is clear that such art draws people in the city. It seems they prefer to hold on to tradition instead of exploring new forms in the art they choose to pay attention to.

In Cochabamba, both traditional and contemporary art seem to be trumped by another emerging type: the beautiful, bustling world of street art. Over the last three years, Cochabamba’s Proyecto mARTadero, which is a street art project in the city, has gained huge popularity worldwide and attracted hundreds of different street artists. During my morning exploring the streets, I saw beautiful, free-spirited art that was clearly less tied to any sort of convention than their traditional and contemporary counterparts. Not only the time frame makes them modern, as the murals tackle political, gender, and succinctly Bolivian issues. One notable example is a cholita who looks to the side with a quote written underneath: ‘All that I had and all that I was, without testament, is lost to the wind'. It is a rather apt quote for the plight of people like Dorado, who continue to fight to have their art recognised here.

Proyecto mARTadero does not only deal in street art. The organisation has a website dedicated to providing a platform for art – whether it be contemporary, musical, traditional, or literary. For those who believe the art scene here is failing, it is a welcome tool to bolster cochabambino art.  After the recent years of struggle, perhaps Cochabamba's art scene may flourish sooner than one can predict. The immediate future looks difficult, but the long-term could be much brighter.

Alejandra Dorado's studio can be found in Cala Cala, Cochabamba. The Palacio Portales Museum is located on Calle Potosi, just off Avenida América. Find out more about Proyecto mARTadero at www.martadero.org.