The Ch’askitas, named after the quechua word for star, are Sacaba’s latest girl-band export. Amaru Villanueva Rance went to meet these folk starlets to learn their story, and left with three goddaughters; three more than he had bargained for.

I first met the Ch'askitas and their entourage on a Sunday afternoon in the Plaza Murillo. Vigorously waving their sequined green polleras to the rhythm of a zapateo, the three girls sung, smiled and danced to a huayño rasping out of a tinny handheld speaker. The Palacio de Gobierno served as a curious backdrop, and the innumerable pigeons which overcrowd the plaza seemed characteristically unfazed - if anyone was paying attention, it certainly wasn't them. A crowd, which I soon discovered I was a part of, gathered around them with a certain uncertainty. This was no ordinary street performance. Camouflaged among the crowd, wearing a khaki utility vest, was a man holding a large video camera. Meet Jhonny, manager and padrino to the Ch'askitas.

I don’t remember how or why but my friend Esmeralda and I soon started talking to a lady with a big warm smile and gold crowns around her teeth (see p.6). ‘We’re filming the girls’ first music video. That is my daughter Araceli’, she said, pointing to the smallest one of the three. Meet Benita, an unmistakably Cochabambina chola.

The girls finished dancing and came over, ice-creams and juices in hand. Seemingly accustomed to media attention, they courteously introduced themselves to Esme and me. ‘Me sacas una foto?’ – ‘will you take my picture?’ Meet Araceli. It goes without saying she is not camera-shy.

The rest of the afternoon is somewhat of a blur. A pigeon stood on Jhonny’s head. We laughed. They asked us to recommend a place with a good view, and an hour later we found ourselves taking them to the mirador Killi Killi, which offers some of the most panoptic views the city has to offer. Bricks, clouds, erosion and chaos – the improbably majestic Illimani dominating the backdrop. Nothing out of the ordinary. All I know for certain is that by the end of the afternoon Esme and I had agreed to be godparents to the Ch’askitas.

Two weeks later I found myself some 400 kilometres south of La Paz, in their hometown of Sacaba, the second largest city in the department of Cochabamba and home to over 100,000 people. No sooner had I arrived, I was being served unfinishable amounts of food by Benita, and drinking beer with Jhonny, Dally and her husband Juan. Meet my new compadres and comadres. 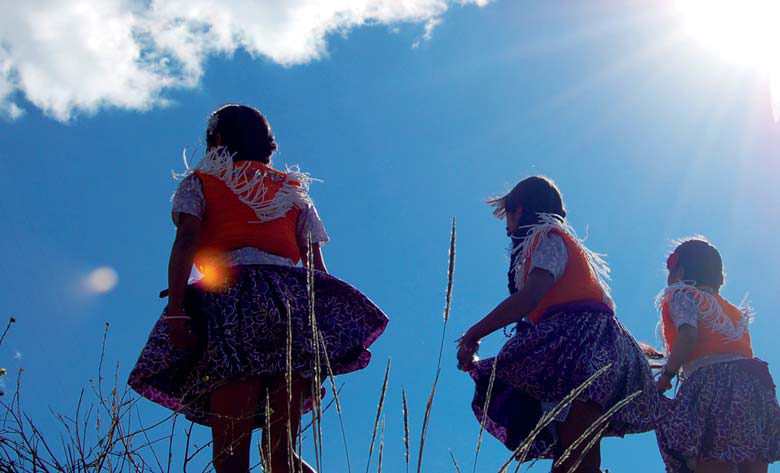 That was in August 2011. I returned to visit the girls a few weeks ago, and got a chance to catch up with them and learn a bit more about how they came into existence and where they’re heading.

Dally and her husband welcomed me into their home and sent their youngest daughter Danielita to the shop to buy a bottle of Coca-Cola, the Bolivian equivalent of putting the kettle on and offering their guests a cup of tea. To my surprise, out of the three girls I only found Liliana there. ‘The other girls are coming over soon, I just phoned Benita’, Dally told me. She then picked up the phone, dialed a number and said ‘Doña Cristina, can you please send Daniela over in her orange pollera?’ She hang up. ‘She’s coming right over’. Suddenly my phone rung. It was Doña Benita with some strange news: ‘Araceli doesn’t want to come and see you’.

‘What’s wrong?’ I asked. ‘I’ll put her on the phone’. A quivering voice greeted me on the other end. ‘Padrino? I’m embarrassed’. I could hear her sniffling. It turns out that, taking advantage of the end of the school year, Benita had gotten Araceli’s hair shaved off. Last time I saw her she proudly posed her striking trenza. ‘Her hair was too thin and didn’t grow much’ she would later explain, ‘shaving it all off makes it grow back stronger and thicker’. Two things suddenly made a lot more sense. Firstly, the logic behind a seemingly unspeakable act of cruelty. Secondly, Araceli’s reluctance to come and meet me. Jhonny helped me to talk her over ‘don’t be embarrassed Chelita, we won’t think any less of you’. We went to pick her up at her house in Jhonny’s car. As a curious aside, while ch’aska means star in Quechua, it is also used in the Andean region to denote someone’s hair, especially if it’s ruffled. Ch’askosa is the kind of thing you’d say to a girl who had morning hair, with that non-deliberate just-woken-up look. Hardly what I encountered when Araceli came to greet us. She was wearing a cozy hand-knitted pink hat over her head, which her friends helped her use to conceal a pair of artificial trenzas. The Ch’askitas were primed for the cameras, and the three girls led me into one of the sets in Canal 31. ‘Can you take some pictures of us here?’ Liliana half-asked and half-ordered.

Jhonny tells me there used to be a group called Las Chismositas (the little gossip queens), originally conformed by two sisters. Liliana was invited to take part, but things quickly turned sour. ‘They made her feel bad. She sang better than the other two girls but they still turned the volume of her microphone down during performances’. Enough was enough. Doña Dally soon took her daughter Liliana out of the group and decided to start a new group from scratch. They considered calling them Las Estrellitas, the Spanish word for ‘starlets’, but soon learned the name had been already taken. So they called them Las Ch’askitas, instead, which is the Quechua expression.

She soon invited Araceli, Doña Benita’s daughter to the band. ‘But we couldn’t have a band with just two girls, we had to find one more’, Dally tells me. Conveniently, she and her husband own the local television channel, Canal 31, so they decided to call for a televised audition for the third Ch’askita. ‘Over 30 girls turned up but many of them left crying after they didn’t make it through the successive audition rounds’. In the end, Daniela was the one who shone through after three attempts.

Weeks after forming they made their first public appearance at the festival of La Virgen de Amparo (Our Lady of Refuge), one of the largest cultural events in Cochabamba. They performed alongside the ‘Cholitos’, their male-character dancing counterparts. Interestingly, one of them was performed by Danielita, Liliana’s younger sister. Without a hint of embarrassment she tells me ‘when I wear a chullo I look like a little boy!’ The girls’ self-assuredness shines across, not through arrogance and boastfulness, but through a distinct lack of self-consciousness.

Like shooting starlets, their trajectory launched them to places far and wide, leaving behind them a trail of admirers and stolen hearts. One day, disaster struck.

Daniela remembers it as follows: ‘it was a Monday. I got home and left the house to go and look for my sister who was washing clothes down at the river. I was leaving the house and crossing the street, when a car hit me on the shoulder. To get away the driver then ran over my leg’. Daniela was hospitalized for over a month. ‘I cried a lot but the doctor told me “be thankful you still have a leg – you almost lost it”. After a while I was still sad, not because of my accident, but because I thought I would no longer be part of the Ch’askitas. That was the hardest part of it all’. The hit-and-run (and possibly drunken) driver was thankfully caught at the tranca further up the road. However, Daniela’s mum Cristina tells me that the man responsible barely paid $1000 ‘but the bills came to over $6000. I am now in debt, but what can I do. When your daughter is hurt, you do whatever it takes to find the money’.

While Daniela was in hospital the other Ch’askitas went to visit her in hospital. Even after she came out, she was still in the recovery process and could barely walk, let alone dance. The group had to carry on so they found two replacements. Dally tells me ‘I would speak to Daniela on the phone. She would ask “will I still be able to be part of Las Chaskitas?” and I would tell her that she would always be a part of the group, but the most important thing was for her leg to heal and for her to get better. Dally quickly points out that ‘none of the other girls we tried fitted in as well as Daniela. The three girls just get along. They’re there for each other when they’re going through a hard time’. She was out of action for a whole year, and in the past two months she recovered enough and was able to come back. Cristina states firmly that ‘because of her accident I wanted her to move forwards no matter what. I wanted to give her that support because it’s what my mother was never able to give me’.


Despite the difficulties the band have continued to work hard and move from strength to strength. Highlights over the past year include performing in front of a crowd of 2,500 people, as well as performing at a number of private venues and weddings across the country. Last Christmas they were also involved in Canal 31’s campaign to collect presents for Sacaba’s less fortunate children. Thousands came pouring in. The channel also asked local kids to write in saying what they wanted for Christmas. One boy wrote in ‘all I really want are the Ch’askitas’. Liliana has also broadened her artistic horizons by taking part in an action film about gangs and the drug trade in Sacaba’s neighbouring regions.

What lies ahead for the girls? They continue expanding their musical repertoire, though their parents and Jhonny (their manager/godfather), are adamant to keep the content of their songs relevant to their age group. ‘We don’t want them to sing the Chuculún or El Negro Está Rabioso. The Sirenitas [another folk girl band from Tarata] sing songs such as these. It’s not appropriate’. They’ve planned a music video for next year for the song Colesterol. Dally explains: ‘we want to relate the content of the video with what the songs lyrics are about. In this song a woman and a man sing to each other. He says he doesn’t want to get fat, yet she keeps offering him fattening foods’. I asked the girls to sing me some of the lyrics: ‘do you want me to prepare you a chicharrón, or a slice of ham, or do you prefer fried chicken my love?’ ‘None of that for now my dear’. 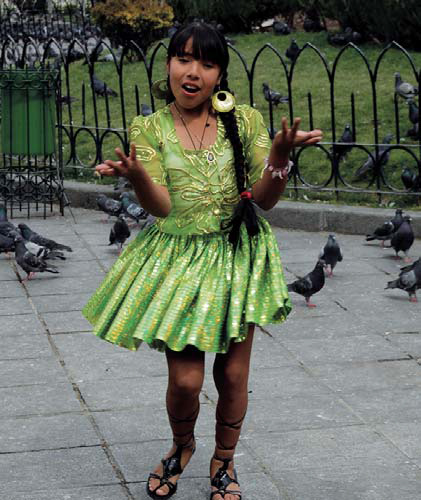 Dally is aware of the tensions inherent in managing a girlband and raising a child. ‘We keep moving forward but we don’t demand too much from them because they’re still young and they are in school. But if they are still interested in this later down the line we’re going to support them to continue making music’. The girls have no shortage of artistic role models. Jhonny himself has played in several folk bands, and I later learn that Dally is the stage name of the girls’ mother, a compound formed by the first syllables of each of their names (Daniela and Liliana). Her real name is Margarita, and she is an occasional actress as well as a TV producer. Jhonny later adds: ‘We always tell them that what’s most important is humility. To greet politely, express themselves naturally in front of people, treat everyone with respect. The girls understand this’. After a short pause he adds: ‘I thank God because I’ve always wanted to have a daughter. He gave me three’.