Connecting to the Roots From the Roots 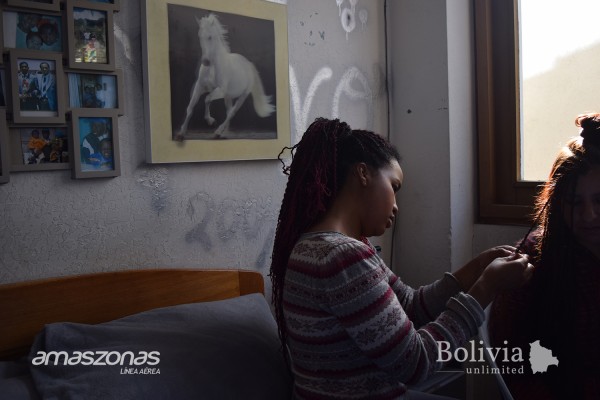 An Afro-Bolivian entrepreneur brings braids to the fashion forefront

Afrobolivianidad is often presented as being defined by saya and discrimination. The former is the music that Afro-Bolivians connect with their long-lost roots, and the latter is the inescapable result of centuries of slavery. Hair forms part of both of these realities – it is an inseparable part of Afro-Bolivians’ identity and culture. Saya dancers wear their hair in braided hairstyles so that it sways to the bass of the drums, accentuating the dancers’ movements. The hairstyles of people with African ancestry are historically and politically charged. Whether it is a gravity-defying Afro, a curly mane, dreadlocks or intricate braids, the way black people choose to wear their hair is important. Afro-textured hair is incredibly versatile and diverse. It’s able to take on a variety of textures and shapes, but it is also very fragile and misunderstood – and therefore needs to be tended to with skilful hands. Siboney Angola is a young Afro-Bolivian radio presenter, dancer and model turned entrepreneur who is also the proud owner of Áfrican-Queen, a business specialising in hair extensions and braids – the first of its kind in La Paz.

Siboney is a member of one of the most prominent Afro-Bolivian families in the city of La Paz. Her uncle, Juan Angola Maconde, is an economist and historian who is most recognised for his investigations into centuries of lost Afro-Bolivian history. Her sister Carmen Angola Campos is a former gymnast and a prominent photographer, and her late brother Pedro Antonio Angola was the founder of the rock band Aeon. Siboney credits her Aymara mother for much of the success that she and her siblings have experienced, saying, ‘She always enrolled us in lots of activities, and she really pushed us because she knew that in order to be recognised and respected we had to be outstanding.’

But coming from a family of trailblazers did not spare Siboney from racism. ‘In school, I had it really bad,’ she says. ‘I would never wish for anybody to experience what I did. I was called all sorts of names. They would pick on me all the time. It was awful. The worst part was the teachers – they would just blow it off as kids being kids.’ Siboney’s hair was mocked constantly. Siboney credits her paternal grandmother, who was renowned for her braiding skills, for teaching her how to braid. But she says she also had help from her sister. ‘When I was 8, my sister taught me how to braid my own hair,’ Siboney says. ‘It kept my hair out of sight, which helped with the bullying and allowed it to grow.’

Braids are a protective style, adopted by men and women around the world as a practical and aesthetically pleasing way to wear their hair. But it was on the African continent where individual braids turned into an intricate art form, with individual tribes across different regions adopting a multitude of braiding and locking styles. The intricacy of patterns was a way to decipher the origins, background or relationship status of a person – this intricacy also means that certain hairstyles could take over 24 hours to complete, turning a braiding session into an intense bonding session.

‘I have always felt like being black makes you a global citizen. We are all over the world and we are deeply connected.’

Siboney started her business in 2014, the year she found out she was pregnant and left her journalism degree behind out of the need for a fixed income. She describes the business as her second child, though it is not without challenges – all of her materials and merchandise have to be imported at a steep cost and she has far fewer clients than a ‘conventional’ hairdresser. African braids are new here in Bolivia, she says: ‘Braids really came into fashion in 2015, because of Instagram and other websites.’ Instagram has birthed thousands of black influencers who challenge the conventional notions of beauty without the need for a high-fashion stamp of approval. ‘I have always felt like being black makes you a global citizen,’ Siboney says. ‘We are all over the world and we are deeply connected.’ Now with social media, this connection is even closer. And for Siboney, braids are far more than an internet trend. ‘I feel connected to my African roots because of my hair,’ she says. ‘Everywhere I go, whether I am attending an event as a guest or modelling, I am representing my people, and my hairstyles are a huge part of that.’ Braids are more than just a style to protect hair or a trend; they are a connection between the African diaspora, its descendants and the continent’s tribespeople. A connection to the roots, from the roots – literally.

Siboney holds her head high – even under the weight of her extensions and in light of racist microaggressions. Apart from dealing with ignorant comments about her and her mixed-race daughter, she and many other black Bolivians have had unsettling experiences of being pinched and touched by strangers who believe in la suerte negrita — the belief that black people are lucky charms. ‘I used to get really angry,’ Siboney says. ‘My sister still does. But I realise that being aggressive makes everything worse. I try to be calm and speak to people in a way that makes them rethink their words and their actions.’ And she feels optimistic about the future of Afro-Bolivians. ‘Now we are more visible,’ she says. ‘More of us are daring to dream, finishing school, getting involved in politics. I’d love it if more of us could stand up and demand what we deserve.’ Siboney is a symbol of the potential future for Afro-Bolivians: educated, proud and independent.