Coming of Age in Bolivia 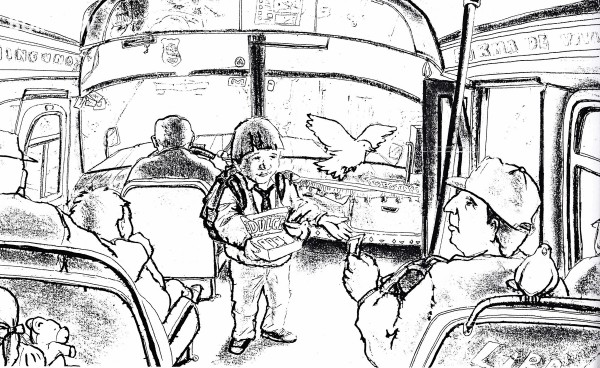 The Local Road to Adulthood

Growing up is never easy. Around the globe, we have witnessed the so-called Peter Pan generation increasingly put-off adulthood and refuse to leave their cocoon. In Bolivia, however, things are slightly more complicated.

Alvaro Saico is a seventeen-and-a-half year old paceño who has shouldered some of the responsibilities of adulthood since the age of eight. He started working by helping his mother sell candy in the buses going to Los Yungas. After some years, he sold arroz con leche in El Alto, across town from his neighbourhood, Villa Fátima. He has worked as a voceador in minibuses around the city and, in his last job, he distributed pamphlets in the streets.

Shortly after he started working, Alvaro joined UNATSBO, the National Union of Working Children and Adolescents of Bolivia, which is an independent union that aims to defend the rights of this group of workers. At nine, he joined the departmental branch of the union and by ten, he was a delegate from the Children’s Union of Villa Fátima, a position he holds to date.

Alvaro says that the youngest member of his group is six years old. This precocious group of working children and adolescents have come a long way in learning how to lobby and influence public policy. They have learned to forge alliances with the government and to negotiate rates and commercial spaces with the competency of an adult. They have also mastered organisational skills. These young workers make time for study, work, leisure, and for their union meetings. Sadly, they suffer constant abuse from grown-ups and the police while working, along with the discrimination and lack of protection from society in general.

In Bolivia, there are approximately 500,000 children like Alvaro. Unlike him, some of them do not have a family or a house to live in. Nevertheless, Alvaro says he has fully experienced childhood instead of losing it. So, does his life experience make him an adult?

Sociologists everywhere have tried to map the coming of age using markers: completing school, leaving home, gaining a secure job, getting married and having children. But adulthood is hardly a fixed concept. It varies from culture to culture and differs in meaning all over the world. One thing is for sure, though, adulthood is always synonymous with increased responsibility.

Escaping the responsibilities of adulthood is characteristic of the Peter Pan generation, which in the United States represents three million 20-to-34-year-olds who live with their parents. Young people across the world are experiencing a similar reality, since the milestones of adulthood have become more and more difficult to meet in recent years. In La Paz, the rising prices of housing and the growth of the urban centre have made finding a house – and being able to afford it – almost impossible. As in other countries, employment in Bolivia has become less stable over the past thirty years, with few people having jobs for life now. This has undermined young people’s ability to gain independence from their parents. People get married later, they move out later and they have children later. In short, doing the things that make you an adult is getting harder.

In Bolivia, the cultural expectation is for people to live on their own only when they are married, especially in the case of women. The Andean concept of chacha-warmi defines adulthood as that which makes a person complete, and thus a citizen, through his or her formal union with a partner. Moving out in Bolivia represents a big change. It intertwines several markers of adulthood.

This phenomenon could be rooted in the tight family bonds common to Latin American cultures, but it is also tied to the undeniable economic challenges that younger generations face in the country. The local Peter Pan generation – those between the ages of 20 and 34 – almost certainly live with their parents. It is a common practice in Bolivia to build a place big enough for the whole family; a place with enough room for all the children and their future offspring. Renting or buying house near your parents is an adventurous equivalent that has become common in big cities.

Alvaro’s case highlights the paradox that lies at the heart of coming of age in Bolivia. Not only is Bolivia experiencing many of the same issues with the Peter Pan generation as the rest of the world, but it is also home to a group of youngsters who are thrust prematurely into adulthood and forced to deal with the responsibilities that growing up necessarily entails.

It is hard to believe that youngsters like him are only about to reach the legal age of adulthood. Álvaro finished school last year and is now studying accounting, although he wishes he could become a lawyer. He says he wants to bring change to this country from his experience rather than from desk-work. His goals adhere to the markers of adulthood outlined by sociologists, but he has arguably faced enough adversity to last him a lifetime, or rather, a complete adulthood.