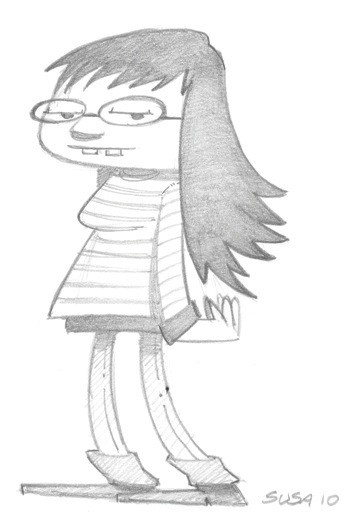 Extreme hill-climbing was apparently inevitable in the quest for fine Bolivian modern art. After the heart-splittingly steep trek up the calle Blesario Salinas, I could taste the blood at the back of my throat and was ready to collapse. Then I discovered the art galleries had already closed. I wanted to cry with despair. Had I punctured my lungs in vain? Not quite. Still open was the Centro de Comics – a comic book library funded by the Fundacion Simon I. Patino offering free access to graphic novels from around the world.

Having always loved Japanese manga, I was mesmerised by their extensive collection. Then, who should casually stroll in but one of La Paz’s hottest comic book artists, Joaquin Cuevas. It turns out all the La Paz-based artists are preparing for Viñetas con Altura (“Vignettes at Altitude”), a comic book festival that has been held annually in Bolivia for the last six years. And I had not even known there was a comic book culture in South America, let alone Bolivia. Comics, or historietas, first appeared in Bolivia as political satire. Particularly influential was the Cascabel series, but its publication was swiftly banned after the military coup in 1971. It was only in the 90s, after a string of dictatorships had come to an end, that comics made a come-back. Influenced by global comic book trends, from Japanese Manga to America’s Marvel action heroes, Bolivian historietas became more apolitical and began to explore themes of fantasy and escapism. One of the greatest debuts was that of Supercholita – a female action hero in traditional Bolivian dress and a magical cape that flies through the skies. However, Bolivian artists do not confine themselves to reworking established characters. In general they tend to be more experimental, and pride themselves on their exploration of comic book genre aesthetic.

The Bolivian comic book scene is still relatively small. The artists rely on self-publishing, meaning they can only afford to publish a certain number of copies of their works. Circulation and readership is thus limited, making the Viñetas con Altura festival doubly important. It is a way to reach out to aspiring artists, enthuse the younger generation and launch Bolivian comics onto the international scene. Over a meal of salchipapas in the back-room of a printing shop, we interviewed some of the key figures in the world of contemporary Bolivian comics.

Only 10% of comic book artists in Argentina are women, but in Bolivia it’s 30%. I don’t really think there’s that much difference between the works produced by men and women, but maybe there’s some truth in the idea that women tend to focus more on the emotional. I’d say there’s currently a search for a Bolivian identity not just in historieta but in all art forms.

“Bolivian comics have always been influenced by styles from other countries. We’re on a constant search for a style unique to Bolivia, and to ourselves. Creating a comic is a one-man show; there’s no collaboration between writer, artist and editor, which allows for artistic freedom.

When I was young there weren’t many comic books available, so I basically read whatever I could get my hands on. Thankfully Marvel and DC comics came out with a Spanish edition when I was fourteen. There certainly weren’t any Bolivian comics. For me, comics are the most natural, intimate form of expression. I like there to be a message, whether it’s personal or political; I don’t like my comics to be hollow.

I originally studied to become an architect, and it was through Vinetas con Altura that I really found out about the comic book genre. I find inspiration everywhere, just seeing what’s going on in the streets of La Paz. I’d say the stories found in Bolivian comics are fairly similar. They tend to be concerned with current-day issues specific to Bolivia, and so it’s possible to make generalisations. It’s in the drawing styles that there’s a complete range.

Comics are the language of action and allow for a rapid transmission of ideas. I now focus more on straight illustrations as they encourage greater contemplation from the reader, giving them the time to form multiple interpretations.

I learned the skills needed for comic drawing through studying graphic design at the Bellas Artes [an Art Academy in La Paz]. I see comics as a unique means of communication, and think it’s important that aspiring artists acquire the technical skills first so they can accurately convey their ideas.

Modern Bolivian comics are characterised by a search – one that’s both aesthetic or gráfica, and personal; a search for identity. As a result, the style is very varied, both incorporating folkloric elements and relying on foreign influences