Coffee in the Veins 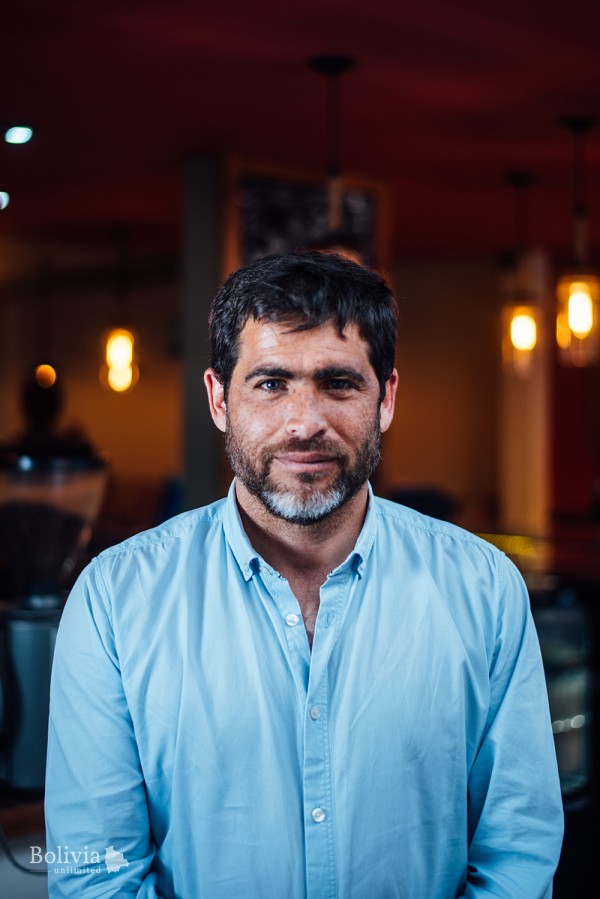 Reviews and Going Out

Over the past decade, the Bolivian coffee industry has transformed thanks to a dedicated group of influencers, one of whom is Mauricio Diez de Medina. From his time as a young man working in the financial industry, and now as an artisanal coffee roaster and owner of a high-quality coffee shop in the San Miguel neighbourhood of La Paz, Diez de Medina’s journey has been a caffeine-fuelled rollercoaster ride, starting in the jungle.

In 1999, a group of Colombian entrepreneurs asked Diez de Medina for financial support with their new project, artisanal coffee production. He agreed and travelled with them to the Bolivian jungle to visit some coffee plantations. ‘From the moment I witnessed the process, I fell in love,’ says Diez de Medina, his piercing blue eyes glinting with enthusiasm. He was struck by the beauty of the laborious production process and the dedication of the farming families, most of whom had never even tasted their own coffee and were underpaid by the major coffee companies.

Diez de Medina’s journey has been a caffeine-fuelled rollercoaster ride, starting in the jungle.

This experience ignited a passion and a drive in Diez de Medina. He brought with him a new resolve when he returned to La Paz: he would provide an alternative to the poor-quality coffee that was rife in Bolivia. He would spread the word that good coffee should not be solely for export, but for local consumption and enjoyment as well, and he would do all of this while respecting, supporting and cooperating with the coffee-farming families. Thus began his coffee-producing career. His company, Roaster, now sources and roasts coffee from various farms in the Yungas region of Bolivia, every bean selected with the highest standard of quality in mind.

‘But it only takes a matter of seconds for a barista to turn a high-quality coffee bean into a terrible coffee,’ Diez de Medina says, shaking his head. The Roaster team consider themselves pioneers of barismo de altura, but this was not a title easily won. When Roaster first opened its doors six years ago, the biggest challenge facing Diez de Medina and his team was consistent quality. If they wanted to spread the message that multinationals had deceived Latin Americans about the standards of quality they should expect in their coffee, then they had to deliver one perfect cup after another.

The road was long, but perhaps made more bearable by caffeine and a healthy dose of enthusiasm. When asked about his work-life balance, Diez de Medina simply smiles, his eyes lighting up as he explains that when you are truly passionate about something and are supported by like-minded people, work ceases to be work and becomes your life. He talks about hard times, such as the backlash from the industry when he decried its quality standards, but always with a confident smile. ‘We have achieved our social objective,’ he says, referring to the fact that artisanal coffee shops are now plentiful in La Paz and popping up all over Bolivia and Latin America in general. Through good practice, lobbying and barista coffee-culture courses, the Roaster team has been instrumental in redefining the standards of coffee produced and consumed within the continent.

It is refreshing to see that, in spite of an increase in competition in the market as well as being a purist at heart, Diez de Medina remains truly enamoured with the coffee industry. One of his dreams is to have a Bolivian win the World Barista Championship, and he excitedly tells me about his coffee laboratory, equipped with the latest technology and open to any barista that wants to train and practise for the championship. ‘It can be available for them 24 hours a day,’ Diez de Medina says.

Through good practice, lobbying and barista coffee-culture courses, the Roaster team has been instrumental in redefining the standards of coffee produced and consumed within the continent.

I comment light-heartedly on how lucky he is to have made his career out of something he loves. Diez de Medina fixes me with a steely-eyed stare: ‘Coffee has given me everything I have: a culture, a career. It has made me more human, it has allowed me to see the good and the bad of humanity, but most of all it has made me see how important it is to work around your passion.’ It is this belief, that humans should live by their passions, all the while respecting one another, that has created the business that Roaster is today. It is a great environment in which to work and socialise; it supports small coffee farmers and it’s a spokesperson for quality coffee in Bolivia. All in all, it is the realisation of Mauricio Diez de Medina’s dream.